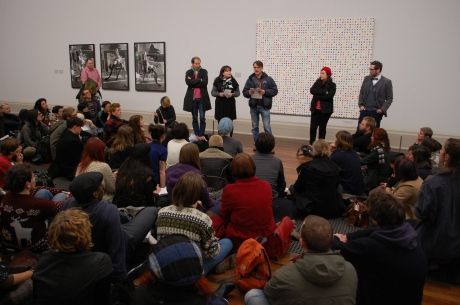 An hour-long “teach-in” has been staged at Tate Britain in protest against cuts to education and the proposed rise in tuition fees.

AIR Activists joined Arts Against Cuts in the direct action, moments before the Turner Prize 2010 awards ceremony was due to begin. When entry was refused to the Turner Prize exhibition, the group of around 200 people staged a sit down protest and life drawing session in the main hall. Crowds gathered outside the building, with loud chants being heard throughout the awards presentation.

AIR Activists and other protesters handed out flyers with 5 key points highlighted:

Tate Director Sir Nicholas Serota acknowledged the action in his keynote speech. He said: “Our art schools continue to be laboratories of creativity. Art should be available to everyone, no matter where you live or indeed whatever your wealth.” The Tate issued a separate statement saying: “We understand that their protest is not directed at Tate.”

Turner Prize winner Susan Philipsz told AIR Activist Katriona Beales she “supports Arts Against Cuts” and “everyone has the right to an education.” Philipsz was earlier quoted in the Guardian describing her activist past: “I used to go to Marxist meetings every week, protesting against the poll tax. I think they have every right to protest. I don’t think they should cut the grants. My heart goes out to them.”

This was a prime example of a well-executed and peaceful protest, with no reported problems making it a credit to all involved. A good dialogue was opened up with the police and security present, who were receptive to calm and collected explanations from activists as to the reasons behind the protests.

The Tate demonstrations signal the start of a week of action resulting from the Long Weekend at Goldsmiths College. For details of AIR Activists role in the action click here