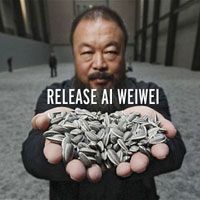 AIR expresses its deep concern at the ongoing detention of artist Ai Weiwei who appears to have been held by the Chinese authorities because of his practice as a contemporary visual artist.

As well as campaigning for more openness in Chinese society, through his work Ai Weiwei has also been responsible for a growing awareness in the West of the richness of Chinese art, history and culture. He is a great example of the positive, growing cross-cultural activity in Sino-British relations in recent years, with many UK based artists now collaborating with Chinese colleagues and institutions. It would be extremely sad to see this rich cross fertilisation of ideas and energies curtailed because of repressive actions.

AIR Activist Rich White recently quoted Joan Miró - I understand that an artist is someone who, in the midst of others’ silence, uses his own voice to say something and who makes sure that what he says is not useless, but something that is useful to mankind. Seems Ai Weiwei fits this description perfectly – it is deeply troubling to learn that his freedom to continue practising as an artist has been taken away.

AIR believes that at all visual artists should have the right to express themselves freely and without hinderance. AIR expresses its solidarity with Ai Weiwei and calls for his immediate release. He is, unfortunately by no means alone – we also support those similarly imprisoned or detained in whichever country they may be.