How can artists effect change? - a-n The Artists Information Company 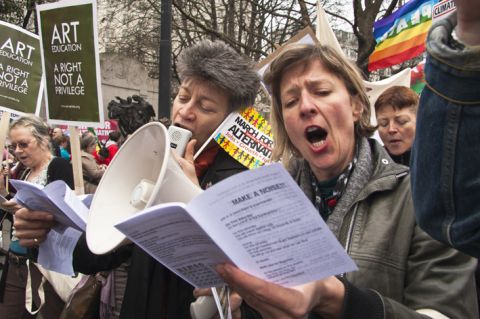 Two of the most important events on the visual arts calendar take place this week. The Arts Council’s State of the Arts, aimed at senior arts professionals, heads to the Lowry in Salford. It acts as a counterpoint to AIR: Artists Interaction and Representation’s OpenAIR at Firstsite, Colchester, aimed at visual artists and particularly their 17,000 strong membership base. Whereas State of the Arts has adopted the theme of ‘artists shaping the world’, OpenAIR asks participants ‘how can artists effect change?’

The last twelve months have seen many people attempt to effect change by literally taking to the streets to get their message across. Last year I attended the TUC organised March for the Alternative in London. Overall around 300,000 people marched in solidarity against the government’s cuts to the public sector. AIR was there to campaign for access to art education – something that has taken a massive hit, having a direct impact on current and future generations of artists.

A lot of work went into organising the march, and although it was a fantastic day out for our members, a year on I’m not entirely sure we achieved a great deal. At the time I remember feeling deflated, as though the months of planning, meetings and liaising with other art activist groups had been for nothing. There was a moment, just as we passed the House of Lords, that I turned to a fellow artist and said: “All this energy, all this protest, and who is listening?”

So what is the alternative? In the last year AIR has made massive inroads into getting artists onto key boards and decision making committees. This includes forming alliances on behalf of artists with the Scottish Artists Union, DACS, Axis, Turning Point Network and Artquest, the European Council of Artists, the International Association of Arts and CARFAC.

However, no matter who you are talking to, the crucial thing is having a clear message to communicate. What I learnt from March for the Alternative was there needs to be something tangible that other people can get hold of. I have worked with a number of campaign groups and activist bodies and one of the finest examples is the Manifesto Club, set up by Manick Govinda, Josie Appleton and Valerie Hartwich. Their campaigns have included the Campaign against Vetting, the Campaign Against the Hyperregulation of Public Space and the Campaign against UK Home Office Restrictions on Visiting Artists and Academics.

These campaigns have clear strategies and objectives that make it easy for both the Manifesto Club’s members and the wider public to understand and see how the outcome could impact on a personal level. They also address issues that are often quite petty, yet sure as hell annoy a lot of people. In terms of the visiting artists campaign, The Manifesto Club recently presented a dossier of cases to Downing Street, along with a petition signed by over 10,000 people, including prominent figures such as the sculptor Antony Gormley and the director of the National theatre, Nicholas Hytner. The news was widely covered in the media, resulting in a critical mass that is difficult to ignore.

Artists are quite often seen as a solitary breed, cut off from wider society. We could just start harping on about how we are having it rough, but let’s face it, so is everyone else. We may have been hit harder than some people, with artists facing cuts in multiple strands of their portfolio careers. However, now is not the time to try and gather sympathy.

When artists talk about ‘shaping the world’ they need to decide not just what it means for them – but also for everyone else. To my mind, this means a fundamental change in the perceived value of artists to society. Many artists I know apply their creative skills to portfolio careers that involve jobs in the NHS, police force, heritage, media and education. In one case, even the government itself. They are certainly not just sat around in their studios, painting pretty pictures and stroking their berets. They are performing important roles that enhance the health and well being of our society.

However, this change needs to come from within the sector itself. How can wider society raise its value of artists if the arts sector itself continues to devalue them. Too many artists I know continue to be exploited by the very people that should have their backs. Here are some examples: late payments, unpaid internships, copyright infringements, unlawful evictions, failure to comply with the basic terms and conditions of a contract – the list is pretty expansive. How many artists out there have encountered at least one of these?

In order for artists to start ‘shaping the world’ they need to ‘effect change’ closer to home. This includes saying no when an ‘opportunity’ is clearly exploitative. It means artists demanding payment that reflects the quality of the service they provide. It means organisations respecting and adhering to a code of practice when working with artists. And it means artists playing a key role on committees and other decision-making bodies across the sector. Once we have achieved this, then we can ‘start shaping the world’.

For full details of State of the Arts click here

This article was first published on Guardian Culture Professionals 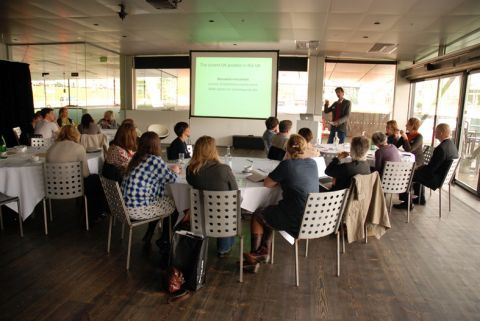