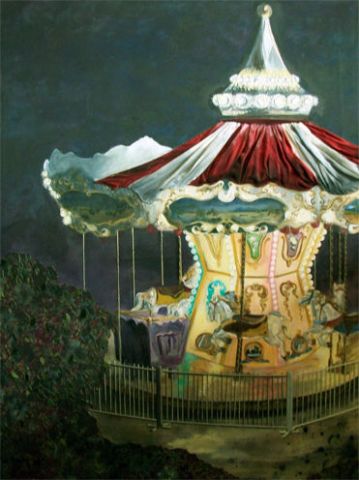 AIR: The new Culture Secretary Jeremy Hunt has announced significant cuts to the arts under the new coalition government. How do you think this will affect you personally?

I also co-manage Core Gallery, a not for profit gallery in Cor Blimey Arts studio’s, that is a charity and cooperative. I do not gain financially from running Core Gallery. We want to make the gallery sustainable, run more educational projects alongside our exhibitions and make Core gallery a local hub for artists. Local authority and central government funding may have played a part in that sometime in the future but that now looks unlikely. We’ll have to fight harder for any resources and be more creative in generating revenue streams.

Should artists be more politically aware?

I think most people have become more politically aware in the last year with various scandals, the election and the first coalition government since the war.  Artists are about as much aware as anyone else and are impassioned no less so than anyone else.  But I don’t think an ‘artist’ should be anything in particular or think in a particular way – we’re not a homogenous group. We have different interests, points of views, feelings about the world and that’s a good thing. Its part of the reason why there’s such a variety of art out there; something for everyone.

That said, Emily Speed’s blog Getting Paid has been a fantastic contribution to the political debate on artist’s rights; Why artists are poorly paid and badly treated and why we don’t create some kind of union to get better representation? Although, I’m not suggesting individual artists should take a more personal interest in politics and reflect it in their work I do think more could be done to promote and protect the interests of artists. We need to be more politically active.

Do you think there has been a shift in generalised assumptions about artists and the role they play in society?

If we’re looking at the recent past, say the last 13 years, we’ve seen massive changes in the role artists play in society which has manifested itself in different ways. Artists have become super rich celebrities quaffing  champagne with blokes in pin stripe suits; art institutions are run by accountants; artists have worked more in schools and communities, inspiring more people than ever to have a passion for art and take it up: to some peoples consternations and others appreciation artists have moved into different spheres, making interactive and participatory work and using new mediums; and the profile of art and artists has been raised with bigger and more eye catching pieces being displayed in public squares, streets and the side of motorways.

There is always going to be sections in British society that think artists are layabouts and wasters but I think they are in the minority. What we have seen is a re-emergence of the artist as a critical part of society.

Diversification and reaching out is a really positive process. The more people that are engaged in art the better.  Even if it is just to be enraged by it!  We’ve gone too far in some respects though and the seemingly obligatory need to make work ‘socially engaging’ in order to get any structured employment or funding only leads to the X-factorisation of the art world; mediocre talent, lowest common denominator selection and transient work that doesn’t stand the test of time.

My own work is socially engaged in a slightly different way; it is an exploration of human experience and identity, viewed through the wilderness of our landscape. Through my work I challenge perceived ideas about place. Exploring the social, political, cultural and historical as well as personal perspectives. When I teach I touch upon this, I teach people about their own community, landscape and identity as well as skills in which to express their feelings about this. I then learn from them too and it becomes a more interdependent approach- therefore more socially engaged.

As we continue to recover from the economic downturn do you think it is problematic the arts have taken an ‘institution-led’ approach to recovery?

I think if government cuts mean that we have to look to other institutions then the arts shall do so and already do so.  We are a resourceful bunch. Large institutions such as the arts council, the national lottery and the like are in charge of the main funding resources to the arts and they are funnelling the resources available to sustain/recover the artistic community so often it feels like they have the monopoly to steer the cultural landscape, for good or bad.

However I think that funding should be improved at more local levels.  I also think that the structure of the arts council should be addressed. I am aware that London is the most over subscribed region for arts council funding, whereas in other regions, the arts council do not receive enough feasible applications and therefore the funding potentially goes to waste. There should be more local London Borough offices for Arts Council funding so that the resources are better distributed across regions. Oh and shorter funding application forms would make the funding applications less obstructive to those of us who do not have a degree in nuclear physics and endless patience!

What are your opinions on Jeremy Hunt’s advocacy of using philanthropy to plug the hole left by government cuts to the arts?

I have no problem with philanthropy but it needs to be a small slice of the funding pie.  We can’t let the art world be funded by a limited number of rich individuals who may be driven by self interest or commercial considerations.  The more people interested in art, supporting artists and buying the better but all this needs to come from a range of sources so that all forms of art are catered for, not just the fad’s of the day.

I am disappointed when I see massive campaigns to ‘save’ a painting for the nation, like the National Gallery’s acquisition of Titian’s ‘Diana and Actaeon’ which raised £50m from private donors while contemporary artists, who are saying something much more tangible, are left to fend for themselves.  £50m invested in the art world of today would have a transformative effect.  If we leave it up to private philanthropists to support the art scene then we’ll just see higher and higher prices for the same old paintings, with the same old names.  Emerging and contemporary art would die.

Our members at Core gallery, invited artists, curators and friends contribute time, resources, skills, art and knowledge to us all the time.  If anything or anybody is going to help young, contemporary or emerging artists through the cash strapped times ahead it’s the public’s creation of artistic communities with where we all pool together and support each other.  Deptford still has some way to go but is an example of how this can work.

Deptford has a very good community of artists, studios and galleries, greater spirit of generosity as a community of artists which has been helped hugely by Deptford X, Julia Alvarez and the Deptford Art Map, Bea De Souza and DNA all of whom have contributed to making Deptford into a culturally important and vibrant place to go. It’s a group effort.

But we are faced with extra threats with ‘regeneration’ projects that are more about creating super swish flats and stamping out the studio’s where we work and thrive. Our studio rent is going up constantly and we are under threat of being evicted with little notice if property developers offer our landlords enough money.

Funders, prominent artists and institutions have so much they could offer to others but I don’t see them being so philanthropic to ground root art communities.  Theycould, for example, choose to fund more studio complexes, educational resources, community art projects, or just even buy some art from artists to help our economy here;  help us to evolve, develop and safeguard our livelihoods from property developers who seek to evict us and ‘ regenerate’ this area and push the cultural quarter out.

But they don’t.  So called ‘philanthropists’ and institutions buy ‘big name’ paintings and that won’t help most of us.

In addition to your visual practice you are a freelance lecturer and founding member of Core Gallery, Deptford, London. Would you describe yourself as having a nomadic attitude to sustaining your practice?

Despite constantly roaming across the country in different roles, to and from meetings, to teaching, to exhibitions, to the gallery office, to my studio I am rooted by the work that I do and the issues I try to bring out in my work.  The various roles I have are all enable me to explore the concept of community and what that means across different sections of society across the world and to the individual as well as community.

It is definitely a diverse lifestyle but taking on these additional roles is essentially research and dialogue that I just happen to enjoy.

I have friends who are documentary photographers and they are endlessly travelling and working on different projects with no links. It must be difficult to manage.

Your blog won Artists Talking’s blog of the year in 2009. How important is digital networking to your practice?

A blog opens up opportunities for dialogue with artists, curators and many others. It allows my work to be seen in a wider context rather than just as a final painting in an exhibition. It gives insight into my practice: the research processes, concepts, anguish, joys, frustrations and experiences. It also enables you to be self reflective about your work. Plus it is not a bad marketing and PR tool either as it gets people more engaged in your work and gives you an opportunity to promote the people you’ve been working with. It all adds up.

The blog has also led to job opportunities and was a wonderful opportunity to reach an even wider audience through the publication.

I don’t think I can manage twitter just yet though, I already do too much and I think that may tip me over the edge! Sorry tweeters!

AIR has over 14,000 members. If there was one issue you would like it to campaign for or against what would it be?

Free university education is something I feel very strongly about. If we levelled the playing field by banning the tuition fees then we could have people selected for courses based on talent alone rather than who can pay the most fees and using international students as veritable cash cows. At the very least government means-tested assisted grants rather than loans. It is feasible as demonstrated in Scotland, (and was the norm in the UK pre 1998) which has outstanding academic institutions. Idealistic I know

I also believe that in art education there should compulsory professional practice for artists, which is essential if new graduates wish to survive in the art world and even get a sense of their newly qualified direction.  It is a wilderness out there and you need to do your research.

I recently gave a lecture at the University of the Arts about how students need to prepare and make the most out of their degree shows. Although well attended, as the talks are optional, as a percentage of the whole institution about 2% of the student body came. New graduates can be so immersed in their practise that their first opportunity to showcase their work is an opportunity missed.