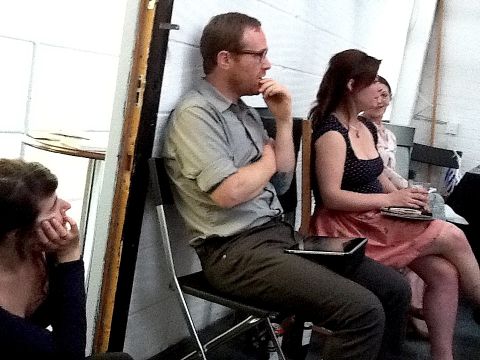 On June 13th I went to the AIR Salon hosted by Core Gallery in Deptford, South East London, chaired by AIR Communications Coordinator Jack Hutchinson, and with a talk by AIR member Rich White. With tea by Rosalind’s mum and sandwiches by the cafe next door, the event turned out to be one of the liveliest and most stimulating discussions I’ve been to in ages.

Rich’s talk centred on the question of how to make your practice pay without compromising yourself. His work is almost always site-specific, dependent upon careful research into the location, and made from found and locally sourced materials. His installations are temporary and cannot be bought or sold. But does this mean they are free from the taint of ‘compromise’? And if they aren’t, does that matter?

Site specific art goes right back to Duchamp, but it was not defined as such until conceptualism, which, amongst its other ambitions, was attempting to side step the market by ‘dematerialising’ the art object. It is well known that this ambition eventually failed as the market adapted to take in conceptual art. One of the ways it did this was by commoditising the artists themselves as well as the works. This is a trend that reached its peak in the 80s and continues to this day. As Boris Groys points out in his book Going Public, you can’t even begin to have any kind of profile as an artist – or any other public figure – without first of all turning yourself into a commodity.

Groys is quick to point out, though, that art goes back longer than the market and will continue after it is gone, so it will always remain rooted in another discourse, which is that of truth, value and meaning. Andy Warhol perhaps understood this better than anyone else, plunging headlong into the language of consumerism, rather than attempting to stand outside of it. Thanks to this his work remains ambivalent and hard to pin down, whilst much Conceptual art seems self-important and dated.

Can art be a commodity and at the same time have value as art? Who do we artists think we are anyway? Are we so special that we think we can live in a world without envy, greed and ambition; without money? It does seem a bit hypocritical to be forever complaining about not having any money and not getting paid for what we do, and then as soon as someone gets to be successful and starts to sell their work, we all suddenly decide they have sold out. Then before you know it there’s the c-word again: commodity!

Andrew Bryant is an artist and freelance editor living in London