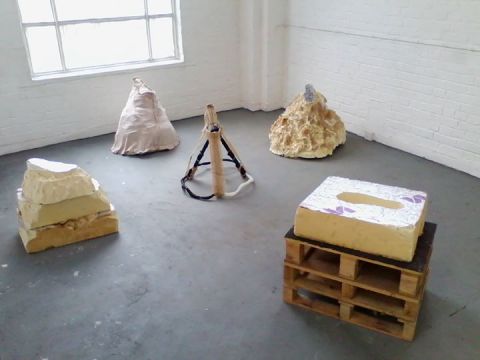 Back in the studio, I felt a little disillusioned to be the only one there. It seems that the artists who are left on the residency are there when I’m not and we only see proof of each other’s existence by the changes to the space and progress on the art we’re all making.

I also was hating working with the concrete canvas and sick of my performance plinths which weren’t satisfying the part of me that wanted them to be made of marble or solid wood, or welded steel, rather than insulation foam, or melted plastic bags!

And I was itching to write, not online, not this blog, but freehand, literally putting pen to paper, in stream of consciousness style, emptying my brain of chatter and concerns, and doing it not just on a couple of sheets of A4, but directly onto the wall of my studio. I began, “Dear Diary,” and every time I went in to the studio, I wrote. I made it my mission to go in, even if I didn’t want to, whenever my schedule allowed. Since that’s didn’t turn out to be that often, I’ve only filled one large swathe of paper, and the option is there for me to fill 4 more, if I want to, time permitting.

It’s an exercise to get over this creative block I seem to have, a la ‘The Artists Way’ book (if you haven’t read it and done the exercises, keep it in the back of your mind for next time you feel ‘blocked’ – Ursula Martinez reminded me of it on the D.I.Y cabaret workshop I did with her at Soho Theatre several months back, and I recalled that the last time I did it, there followed one of the most prolific creative periods of my life). The wall writing might lead to other work or become the work in itself later on, if I’m brave enough to let it be read by complete strangers. I might decide to let it go down with the building, I might throw it in the skip, I might ritualistically burn it, I might exhibit it. I honestly don’t know. But writing it has helped clear whatever block I had to getting back to work on the performance plinth project that I started. And that’s not a bad thing, taking stock and consolidating what I’ve got so far, and finishing off what I set out to do at the beginning of this residency, and then set my attention to gathering it all together for a show at its end.

Having a kid in the studio to remind me of the fun these scuptures are meant to embody was supremely helpful, too! :D