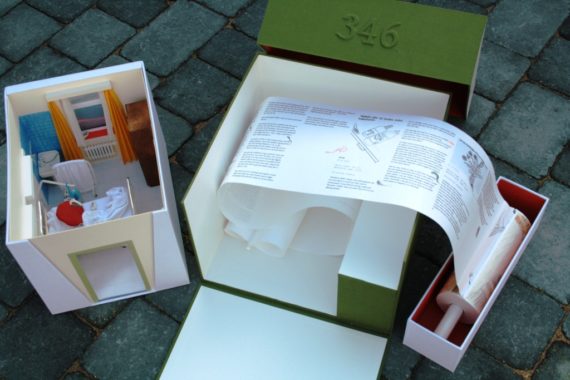 The centrepiece of “346. A Journey While Staying As Still As Possible”, a piece of book art about my experiences during a difficult pregnancy with twins is of course the book itself. I described the format – a scroll – and the reasons for choosing this format in my last blogpost. In this post I want to show you the general visual appearance of the scroll, and in my next and final post I will speak about the text and what it says and tells.

The scroll sits in a cardboard case, and this is covered by fabric onto which I drew a view of the window from my bed. It is a motif I drew a couple of times in my journal back then, and also a view from which I took a photo. I made this specific image at my desk this year, looking through photos and previous sketches. It is drawn directly onto the book fabric, sprayed with clear acrylic to reduce rubbing off of pigments, and the title and my name are then printed on with a printer.

When you unroll the scroll, you can see immediately that the book is written as a daily report like a diary. It always starts off with date, gestation age of the twins and temperature. I had to research the temperatures while writing the book, but they were essential to the experience: Although I stayed in hospital from April to June, so not the traditionally hot months, we had daily highs in the upper 20’s throughout (26°C, 28°C ,… even 32°C on May 31st). For most days I have one larger image, drawn from a visual diary that I kept at the time. Striking and maybe surprising is the amount of fish on the pages. They feature both as large “image of the day” and are also strewn in between the lines and swim across pages.

I drew my first fish there in hospital. — Well, I suppose as a kid I must have drawn a fish one time or another, but you know what I mean: Until then fish had not made an appearance in my artwork. It was at first a completely subconscious thing. I used to be a written journal kind of person, and while waiting there had the time to keep a journal, also felt like this experience was something I should maybe record. But somehow words didn’t want to come, and so I figured it was time for a daily sketch habit. And I often picked a random thing in my room to sketch. One day I  simply made some doodly lines and circles on the page, and filled the spaces between crossings with pattern. Not very productive, but what don’t you do when you are bored. One of those shapes looked like a fish to me, and so I gave this scribble the title “fish”. In one of the next days I sketched the view from my window. When I bend over just a little, I was able to see the roof of another wing of the hospital. Above flew some birds. I drew fish instead. No idea why.

Then greeting cards came in. I answered all them with hand-drawn postcards, and on the first of them I put a “king of fish”, a silly drawing of a fish swimming between seaweed and wearing a crown. And that was really the start into drawing fish. I asked M. to bring me articles about fish anatomy, I asked for scans of the tables in our encyclopaedia of fish, and I started to copy those images. Soon I was drawing a fish a day or more.

Now, fish and I have a difficult relationship. I have a recurring nightmare which is based on a real occurrence: When I was a small kid, I visited an aquarium with my parents, and in one of the tanks was a big albino carp on its own. I was fascinated and appalled by it at the same time, the way his skin was almost translucent. I put my hands on the glass and pressed my nose against it in an attempt to see it from the side to see whether I could see its organs. The fish’s and my eyes locked and were at the same height. Then the fish opened its mouth, wider than I thought possible, and I stared at it, surprise by how far into the fish I could see, and then it started regurgitating bits of whitish cake, almost spit it at me. I stumbled backwards, in utter disgust, and now could see that more of the stuff was already swimming on the surface. Ever since I find fish revolting. I don’t like sitting near aquariums, have a hard time going over a fish market, and I don’t swim in lakes. But all in all didn’t give them much thought.

And then I found myself in hospital, studying fish, and drawing them. When they came out especially life-like, my own drawing would give me goose bumps and looking at it too closely make me almost physically sick. So why did I do it? – As outlined above it wasn’t a completely conscious decision. But although I find them repulsive they do fascinate me, in the same way that I couldn’t take my eyes off that carp in the tank back then. Drawing them was an outlet for what I was feeling, for what I didn’t have any words or other images at the time.

While I was drawn to them subconsciously in the moment, I added a lot of more drawing to specifically include them in the scroll. Almost all of the small fishes have been drawn specifically for this purpose. For me they no longer only represent what I felt in the situation. They do still generate -for me- the uneasy feeling the text describes. But there’s more: My twins were further along while I was there in hospital, and did no longer look like fish on the ultrasound. But they were sitting in water. I was locked in that room, looking out onto the world through the glass of my window. There was this feeling of being looked away, maybe like sitting in an aquarium.

For other readers/viewers of the piece might represent something else. In depictions of fish in Western art it often stands for abundance (of food), and many who have twins feel like they have been blessed by an abundance. And fish in dreams are often interpreted as a foretelling of good things to come.

Ever since then that hospital stay, fish have featured in a lot of my artwork, I draw and print them frequently. After I finished the work on this scroll, I felt relief and think that maybe, once this is all done, I will be through with drawing fish.

But my fish depictions evolved over time, and they are often no longer life-like. Especially smaller stamps I made with fish show them with a cute or funny twist and don’t find them that disgusting anymore. If you would like to see some of my more playful fish prints, try the slide show on this page about my message in a bottle project (artwork that relates to nursing the twins, actually), fish feature big in there, too.