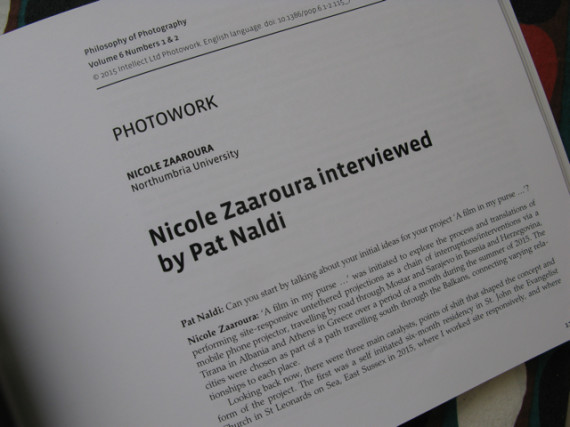 Last November, and out of the blue, came an invitation by Pat Naldi, Associate Editor of Philosophy of Photography (Intellect Books), for me to contribute ‘A Film in my Purse…’ to the forthcoming spring volume. Such an unexpected but wonderful outcome for this project. The interview process itself proved interesting, challenging in some ways, providing a different space and  landscape of questions to the ones that patterned and formed  the making of the work.

My copy arrived a few days ago, and between pages 115 and 130 of the Photoworks section are 11 images and the interview. This sits mid essays and works connected to a trans-disciplinary conference held at Central St Martins, UAL, June 2015. 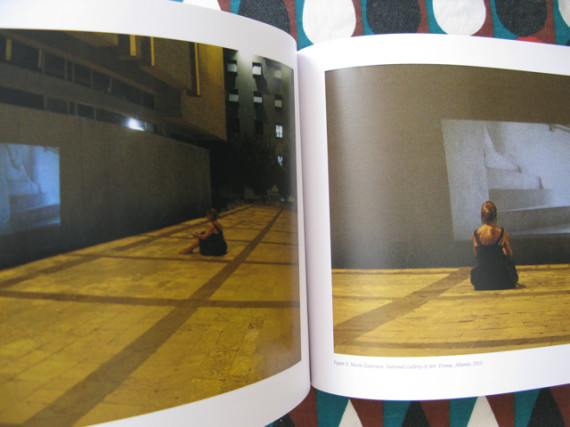 The work has also been shown as part of  The 2015 Photohastings Festival  at The Observer Building, Hastings, and performed as part of Curiouser #06 at ESPS, St Leonards on Sea, 2015 as part of a Belgium/UK project.

‘A film in my purse…’ has imprinted itself within the body of my practice, and within my physical body, its memory and flow, and has provided a new geography for my practice.  In wanting to seek further catalysts for  development, I decided to  attending  Helena Goldwaters Performance Master Class, as part of  the ‘Tempting Failure’ Festival, in London this July.

Clearly I am drawn to all things testing and tempting but unknown, and perhaps another project is emerging…

Nicole Zaaroura is an artist working with photography, sound, moving image and installation,  to explore through documented performative acts, notions of intimacy and distance, the meditative and discordant, in both public and private locations.  It is a practice  rooted in encounter, and an investigation into the brutal tenderness within journeys.