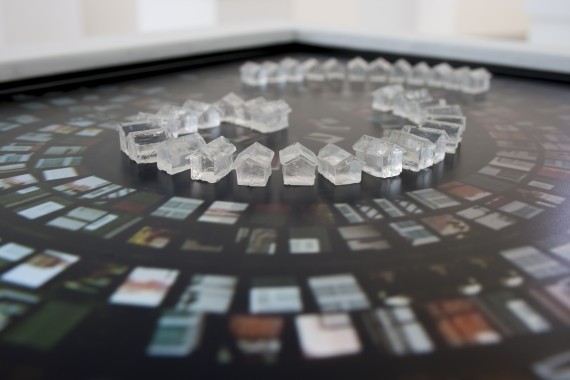 Working towards a solo exhibition in June 2014 at The Brindley, Runcorn. Research|Residency|Project space|Exhibition|Planning for the future

Saturday 6th December saw the second part of my residency at South Square, and it was interesting to see how the lines left behind at the end of the intervention had moved as people had continued to move around the space during the rest of the private view.  Some of the (cheap!) tape measures had self-retracted and enterprising members of the public had found ways of making them stay anchored in position on the night by counter-weighting them against each other.

As other 6 other artists will follow my residency, I wanted to make the ‘drawing’ left by the tape measures more permanent and for the ideas behind the work more accessible.  During the intervention on the 5th I introduced each scenario, listing the people who lived in the space, which I feel creates more of a narrative and lessens how ‘mathematical’ and cold the work can feel.  I want to bring some of that narrative into the work now that the live part is over.

Saturday’s residency was mostly spent replacing the loose tape measures with ones attached to the floor.  I’ve used printed masking tape with measuring markings, but the two rolls of each that I had bought soon ran out.  Realising that I had a load of real tape measures (those cheap poundshop ones that I’m not going to be able to use all of again) I figured that I’d try cutting them up and pinning those to the floor.  By the end of this day I’ve got a selection of the squares ‘permanently’ attached to the floor and plans to do a few more on Sunday, before adding some of that narrative to the work in the form of written notes along the edge of the tapes and some more printed censuses where appropriate.

Friday 5th December was the opening night of residual projects at South Square Gallery where I was invited to create a piece of work live.  The work doesn’t have a title yet, but it involved audience members wielding 32 tape measures in the space in a spate of organised chaos based on the amount of floor area that residents of the former cottage had to live in at points in history since 1841.

It was exciting to have so many people helping in the creation of the work, and the participation certainly seemed to generate conversation about the ideas behind the work – something that sometimes doesn’t happen at the opening event.  The temporary burst of activity left behind outlines arranged across the space that will turn into a more considered/finished/neater piece of work during the following two days in residence.

My last post was about me starting to make work again after the blitz of creating a solo show, but that has been short lived as I’ve had to concentrate on fitting paid work in before Christmas and also working on plans for an upcoming mini-residency at South Square Gallery that happens this weekend.

I was invited to participate in Residual Projects by curatorial trainee Charlie Booth, who saw my work at The Drawing Project in Castlefield Gallery earlier this year.  I’m creating new work at the opening night and on Saturday and Sunday afternoon 5/6/7 December.

Throughout the evening of the 5th December I will create an instinctive performance piece inspired by South Square’s domestic history as a collection of Stonemason cottages. My intervention will involve the audience on the night; dividing lines will intersect the galleries floors and walls, marking out different possibilities of living arrangements within the confined space. This new work is a continuation of the socio-political piece Residential Mosaics shown at the Brindley earlier this year and ‘a remarkable architecture of stairs‘ which looked at the proliferation of high rise flats of Shanghai.

Here’s more info about the show:

Opening night 5 December 7pm
Join me on the opening of Residual Projects to see the beginning of my mini residency as part of this new exhibition or come and visit on Saturday 6th & Sunday 7th December 12-3pm.

Residual Projects is the culmination of an annual traineeship programme between South Square Gallery and The Hepworth Wakefield, which sees Curator Charlie Booth make her debut. Charlie explains;

‘Residual Projects is a critical look at traditional artists residencies, where work will be created and installed whilst the gallery is open. The result will be a group exhibition which grows week by week as different artists enter and leave the space. This is an interactive project, where visitors are invited to engage with the work being created so as to better understand the processes used and decisions made.’

Residual Projects is a series of miniature residencies with seven nationwide artists using the gallery to explore their own artistic interests whilst the gallery is open to the public. The work they create during their residency will be left for the next artist to negotiate. The aim is to create a dynamic group exhibition which explores how artists can work collaboratively.
All participating artists will be creating new work which responds directly to the physical architectural or social history of South Square Gallery and the history of Thornton.

I’ve actioned the action plan (collating all the info about the exhibition and sending it out to contacts) so now it’s a case of waiting to see if anyone is interested in the work/exhibition along with talking to some of those contacts on a one to one basis when the opportunity presents itself.  Quite a few of my contacts have offered to pass the info onto their networks, so there could be a few more curators seeing my work as a result of that, for which I’m thankful to them.

But now that I’ve got that job out of the way, and I realised that I don’t need to submit the ACE report until the end of this month, I’ve had a bit of time to start making new work again.  I’ve been wanting to make some drawings based on the ‘displaced persons’ work (that’s the huge circle with projected hands, & fingerprints)  I had originally planned to print the film stills out, but the resolution wasn’t good enough for print, so that put a bit of a delay on the process.  I managed to get a slot of time with my fellow studio holder Angela Wilkinson who took some new shots of my hands in the positions used in the film piece using her studio lights and nice clean backdrop.  I’ve sifted through them and printed some up, originally intending to paste them onto some smaller MDF circles that I got cut from the waste when making the huge one.  However, the print shop printed some at the wrong size, so today I’ve mostly been playing around with them at A4 size.

I’ve been using the prints as they are laid out, fingerprinting onto them, cutting and pasting the hands onto the page in different configurations and also using the cut away pieces as stencils to print up to.  It feels good to have spent a day making things for a change and the couple of pieces that I have made on the circles are starting to suggest different ways of displaying them and having them interacting with each other.