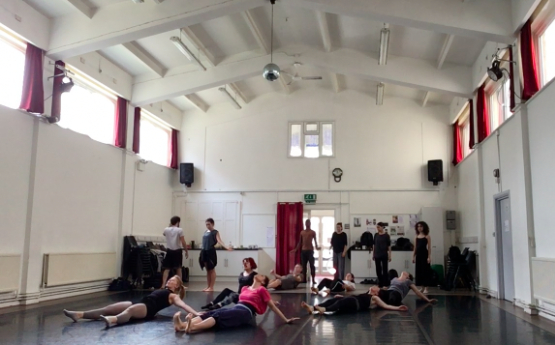 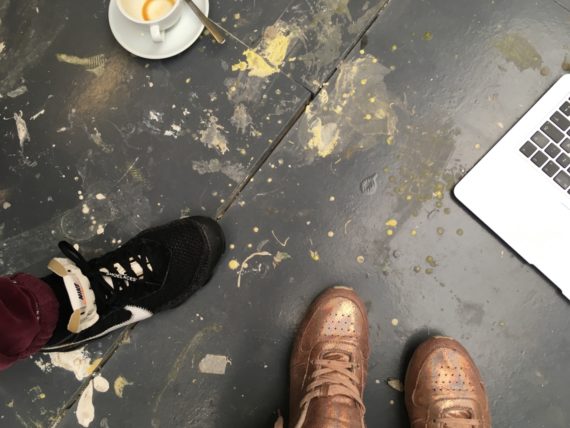 My practice has sculptural and pictorial elements which are combined in installations of varying scales and I also work with dance and movement. Current interests concern the body as a site for the energetic impact of communication blocks and disconnection. Also in the background for the last 10 years I have been involved in music festivals as a core cultural anchor and place of nourishment in my social and creative life. Interested in putting art outside the gallery scenario I currently run the visual arts programme at Green Man festival which I set up in 2016, commissioning three-four new light and digital works each year.

I had been considering two things particular to my multi-disciplinary and sometimes collaborative practice and wanted to discuss these with an artist working in a similarly broad way who was further down the road than me, who also worked in other cultural arenas in conjunction to their art practice.

Eddie Peake’s varied artistic vocabulary encompasses performance, video, photography, painting, sculpture and installation. His main focus lies in the lapses and voids inherent in the process of translating between verbal language and nonverbal modes of communication. In his collaborations he has worked with dancers and recently invited pirate jungle radio station Kool FM to take up residence in one of his immersive works. He also runs a record label called HYMN.

I have been considering the extent to which I tailor the edit of my multi disciplinary practice when approaching curators and other gate-keepers.

Eddie talked to me about painting, and how for him that was the through line in his work. His experience was that although some artists do tailor their work very neatly to the connections that they want to attract, that could be limiting to your practice overall in the long run. An approach with more possibilities might be to show the breadth of what you do and to allow people to surprise you in their interests.

Another concern I had was what is interesting and worth pursuing in the mass of exploratory work that I have been doing.

As well as reflecting that the performance work seemed to be where the most energy in my interest was he pulled out some things from the more sculptural part of my practice. I had everything out in the studio and he picked these objects out of the jumble sale style scenario, feeling that they had an energy and immediacy that was of interest.

Our conversation also underlined the importance of feedback and allowing time for the work to settle. I had work in the studio about to go into an artist-led exhibition in Bethnal Green which was unresolved in comparison to these chosen works, both of which I had made a while ago and had had time to reflect on.

In May 2018 I was invited to make a new work for Scaffold Gallery’s group exhibition There is No Such Thing as Boredom, at Paradise Works, Salford.

The work was a response to the provocation in the title of the show and took the form of a 9 minute film on a laptop supported by an enlarged hand and shoulders of the protagonist. The film pictures the protagonist stuck in front of the computer screen facing the viewer, perhaps waiting for a response from someone, or stuck looking at their workstation. The work explores the state of boredom through movements and actions, moving from a playful feel to exasperated gestures bordering on violence towards the self.

The film was created using expressive movement techniques honed through the training I carried out with Adrian Look.