The first workshop in the a-n Writer Development Programme 2019-20 took place at Coventry Artspace in November. As a follow-on task from the day, the writers were tasked with writing a 1,000-word article on the Coventry Biennial.

All the features will be published on this blog – here’s the latest, by Sheffield-based writer Orla Foster. 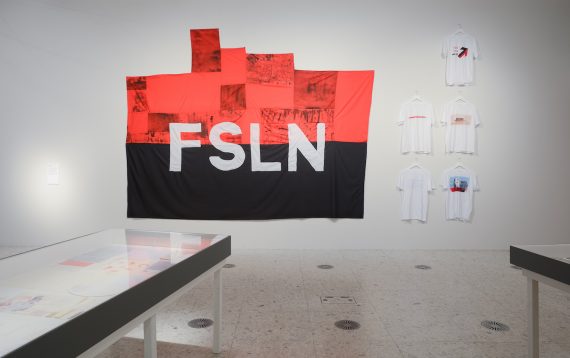 “Just walk through any door you can physically get through,” suggests Ryan Hughes, founder and artistic director of the Coventry Biennial. We are in The Row, a former NHS rehabilitation unit turned visual arts space and one of the two main sites for the biennial. It still bears traces of its former life; peeling walls the colour of spearmint, flickering lights and industrial carpets. At first glance, it doesn’t seem the most obvious candidate for the staging of contemporary art, but then nothing about the Coventry Biennial could be described as “obvious”.

Founded in 2017 and now in its second run, the event (which bills itself as “the UK’s social biennial”) has sprung up in 21 sites across the city. Comprising over 800 works by more than 100 local and international artists, it is already redefining how people in Coventry experience art – a bold intervention in a city that has never before programmed conceptual art on this scale.

Hughes is aware of the somewhat stuffy connotations surrounding biennials, and understands that they do not always offer the most accessible way to experience art. “Biennial is a word many people don’t know how to pronounce,” he notes. He made a conscious decision to discard the “baggage” of the traditional biennial format, and its frequent failure to engage with the local area on any meaningful level. “A huge number of biennials don’t show any art from their location,” he adds. “That disgusts me.”

Location, in this case, is crucial. The theme for 2019 is ‘The Twin’, a concept providing fertile ground for commissions exploring ideas about doubles, binaries, replicas, and fakes. It is also an idea peculiarly central to Coventry’s own identity. This year signals the 75th anniversary of the city’s twinning with Stalingrad (now Volgograd), a gesture which marked the start of twinning as two war-torn cities celebrated what they shared in common. Coventry has since partnered with another 25 towns and cities around the world.

This sense of solidarity across international boundaries has been challenged in recent years, however. Coventry Biennial is deeply influenced by the current political climate and the various issues that continue to splinter society, including the Brexit vote. “Coventry voted Leave, despite founding the idea of international friendship,” Hughes says, “so this felt like a rich moment to have honest and open conversations with artists and with the people visiting the exhibitions.”

Duality is even suggested by the biennial’s main venues which, explains Hughes, simultaneously “complement and antagonise one another”. In contrast to The Row, the Herbert is a traditional gallery space where work is neatly dispersed and well-lit, wall texts reassuringly providing context for each piece. Many of the works engage with Coventry’s twins, such as Anne Forgan’s Nothing and Something (2019) reflecting on the artist’s trip to Chinandega in Nicaragua, and Adele Mary Reed’s Five Dérives (2013), a series of photographs profiling six European cities (including Coventry), using colourways to analyse the features they have in common, and those they don’t. 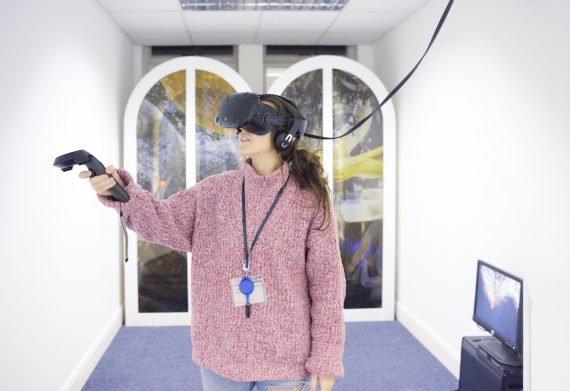 Exploring The Row is a totally different experience. There is something unnerving about seeing a former clinic left stark and bare, as though abandoned overnight. It is a discreet reminder of the straitened circumstances currently faced by the NHS. While many of the works overlap with those on display in the Herbert, here you have to roam through darkened corridors and deserted interview rooms to find them.

A poem in the stairwell by Paul Chan and Badlands Unlimited acts as a mission statement for the festival and is translated into several languages: “No to news as truths /No to art as untruths”. James Birkin’s paintings (Untitled, 2018) show building interiors in disarray, their crumbling tiles and shredded wires prompting you to question what happens when spaces outlive their function. Elsewhere, Georgia Tucker’s VR installation Terra Firma (2019) comes with a warning, its immersive rendering of a digital tree canopy making the room pulsate with noise and light. It feels like art that has been let off its leash.

Seeking out non-traditional settings for exhibitions is a way of celebrating the civic spaces which make up the fabric of the city, while also encouraging people to view their surroundings differently. Alongside scouting unconventional venues, the Biennial team made it their mission to bring work to people directly, hosting workshops in high-rise accommodation and helping to develop new studio spaces in disused spaces, as well as inviting people to eat lunch together, attend yoga sessions and other inclusive activities. Already, Hughes has noticed a shift in the way art is being experienced. “We don’t need to tell people to come to the shows,” he says, “because they’re already in the shows. Or else their dad, their auntie, or someone they know will be.”

It is evident that the biennial’s first iteration in 2017 had a galvanising effect on artists within the region too: “In a city with very little arts provision we saw immediate change, an outpouring of creative excitement because there was somewhere to make and show work.” With Coventry having been named 2021 UK City of Culture, the biennial has laid some solid foundations for the city’s year in the spotlight.

Despite this, the Coventry Biennial wasn’t conceived as some glossy forerunner to the City of Culture. While Hughes is planning to collaborate with the organisers in 2021, his main motivation is to spark dialogue and to make people feel more invested in the art that is being produced in their city. “In one of our Potluck Lunch events, I sat back and looked at who was in the room,” Hughes recalls. “We had people from non-profit organisations, national funding bodies, a homeless guy who’s attended all our events, two local artists and an international prizewinner, and someone who had just popped in with his camera.” This, says Hughes, is just how he had envisioned breaking down the barriers between arts practitioners and people living in Coventry: “It’s exactly what we started the biennial for.”