Following the first workshop on the a-n Writer Development Programme 2019-20, hosted by Coventry Artspace back in November, the writers were tasked with filing a 1,000 word feature on Coventry Biennial.

The article needed to include quotes from the biennial’s director and founder, Ryan Hughes, while also introducing the reader to this young biennial and the context it operates in. The final feature from the programme participants is by Valerie Zwart. 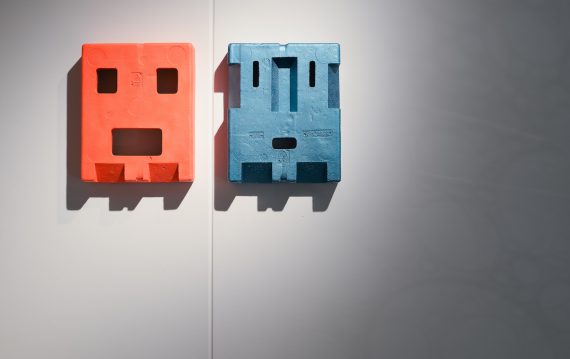 “It could have gone horribly wrong,” admits Coventry Biennial’s artistic director Ryan Hughes. This could be said about any endeavour of scale, but the 2019 biennial may have felt particularly precarious for Hughes, its only curator and full-time member of staff. With the help of a small team, he coordinated the contributions of 106 participating artists, 33 organisational partners and four public funders – all in the anticipation of 50,000 visitors.

Hughes themed the biennial ‘The Twin’, after the practice of twinning cities which began with Coventry’s linking with Stalingrad in 1944. That meant tapping talent from art communities in the 25 cities that Coventry has twinned with in the intervening 75 years.

Founded in 2017, the biennial was initially a response to Coventry’s 10-year cultural strategy, which included Coventry’s bid to become the 2021 UK City of Culture but did not include much visual arts provision. From the beginning, Hughes has viewed this project as an “opportunity to be bold and ambitious”. So, in the city that with twinning has done so much to promote the idea of international friendship, yet which also voted Leave in 2016, Hughes set out to engage with Coventry itself. Consequently, the 2019 exhibition’s positioning as the ‘UK’s social biennial’ also meant delving inwards to engage locally and join up communities that don’t usually meet.

Art is the catalyst here, levelling out social space – across studios, museums, tower blocks and homeless charities – to create the kinds of social experiences that change mindsets: getting people together to eat, do yoga, or make art. Hard-to-engage communities will come to the biennial, says Hughes, because they, or someone they know, are in the biennial. This kind of levelling is itself a kind of twinning.

Scale and complexity are good reasons to have a pragmatic approach to the biennial model. But Hughes has kept only the “useful” elements of the model, discarding some other typical features like being a “showcase for commercial galleries, as most biennials are”, and the habit of not showing the work of locally-based artists; something that “disgusts” Hughes. The outcome is a 50-50 mix between national/international and local artists.

Ultimately, however, a biennial is still about the art itself. At one point in its development, the civic aspect of ‘The Twin’ became so dominant that it felt like the team was, as Hughes puts it, “doing the council’s work for them”. The realisation led to an opening up of the theme to explore a much wider range of dualities’ including the double, the copy, the fake, the replica, (non)binaries, mirroring and counter experience. “At that point, we felt the exhibition had some sort of potential to probe and explore the contemporary moment that feels deeply problematic.”

The contemporary moment is undeniably present in the artworks shown at the biennial’s two main venues, but the work never comes over as illustrative of a particular curatorial perspective. This is partly a function of the twin as the biennial’s versatile conceptual lynchpin, and it’s also down to the contrasting nature of the show’s two main venues. One is the Herbert, a white-walled, purpose-built cultural vessel. The other, the Row, is a former NHS addiction rehab clinic, untouched since the day it was abandoned. These two venues are as socially and politically non-identical as twins ever could be. 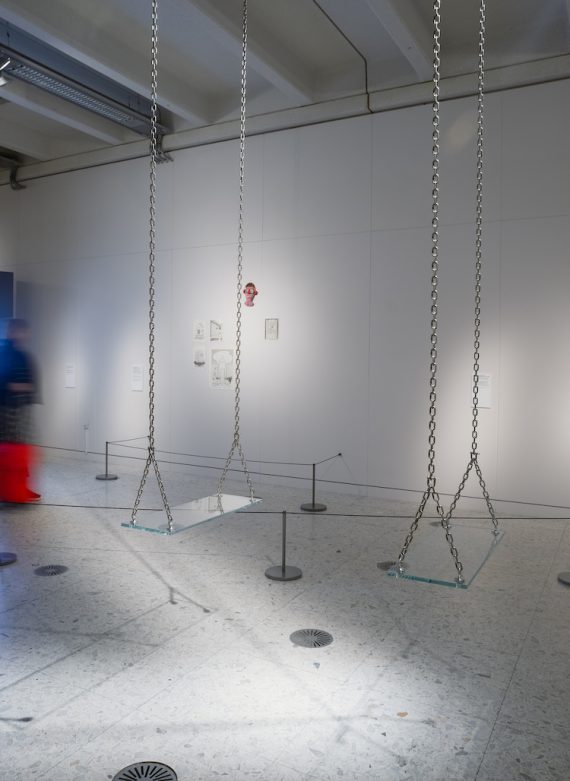 At the Herbert, the work itself does all the heavy lifting, and two works – one by a local activist, the other by an international award winner – best demonstrate the accessibility and spirit of this part of the exhibition. Adele Mary Reed’s Five Dérives series of photographs looks outwards and within Coventry to make connections. Reaching back to Guy Debord for inspiration, Reed walked around five cities photographing their similarities and differences. In an extension, or twinning, of this work, Reed also shows a more literally and physically accessible series of derivatives — photos of cats in windows in the five cities, to be distributed as window stickers throughout Coventry. The accompanying wall text doubles as a notice for a meeting of Mothers Who Make Coventry, an organisation supporting mothers who are artists, of which Reed is a local organiser.

In contrast, it’s hard to imagine a more elegant examination of a problematic relationship than Mona Hatoum’s A Couple (of swings). For most, an empty swing is an open invitation, but Hatoum’s face one another at a proximity that makes them impossible to use, even if these swings weren’t made of glass. The Palestinian-born artist has neatly evoked the universally relatable notion of unfulfillable potential due to a thing’s own nature and position in relation to its immediate surroundings.

At the Row, many of the pieces are site-specific, referencing health and identity themes. These include Hira Butt’s Dhee Rani (Princess Daughter) whose evocation of the use of power within a specific culture requires only a few angled poles, bracelets and a bejewelled football. In contrast, the home-made aesthetic of Matt Gale’s Soma, featuring vessels with balloon-like shapes that distill liquid and light from a central heart, lung and oesophagus, gives a visceral sense of the fragility and imperfection of the human body.

The contemporary moment is also echoed in Darryl Georgiou and Rebekah Tolley-Georgiou’s dual-screen valentine to cold war paranoia, Twin stranger: entangled state, which pairs a series of filmic reframings of two images – a Berlin hotel lobby and an ID photo of a boy – with narration that seeds suspicion into every element, in a stream-of-consciousness tour of impressions and insinuations. It has an illogical centrifugal force very reminiscent of social media.

Some works are ‘twinned’, or shown at both venues. One of these is Lorsen Camps’ 2 Masks (Pollux & Castor). At the Herbert, two styrofoam packaging inserts come into sharp focus as an ur-artwork – born of our hard-wiring for seeing patterns – here as faces recognisable in the moulded packaging’s spatial voids. It also references an ongoing ‘faces-in-places’ social media meme. At the Row, it is hung either side of the one-way reflective window of a managerial office – asserting social and political meanings of inequality and location, while also literally reflecting the mirror aspect of twinning. However, the diverse facets of this work are so beautifully distilled by the two different venues that it made other ‘twinned’ art pieces, like the nominally variegated patterning of Richard Scott’s Grain Progression, and walking through Dylan Fox’s Strip Curtain of transgender flag colours, seem like the twins you can barely tell apart.

What visitors won’t see is the exhibition’s own twin: Coventry 2019’s legacy of ongoing relationships with new art audiences, and the next two year’s worth of creative programming at the Row. This legacy, which leaves the team “hyper-aware of making work when we’re not making work” is clearly one of the valuable bits of the biennial model for Hughes. His observation that “something is happening and building in the city”, and that the “challenge now is to harness that, or steer it toward the City of Culture biennial” would seem to indicate that this particular twin will be a key part of the next biennial.