Twelve months ago I was very pleased to have been invited to Rabat by film maker Marouane Bahrar after meeting up with him whilst I was on holiday in Marrakech. Marouane is a friend of the artist Said Afifi who I was showing with in a touring video exhibition called ‘Time is Love’ (7) 2013. TIME is love screening is an annual international video art program on the theme of love in hard times. We became Facebook friends and I knew he lived in Casablanca approximately 3 hours by car from Marrakech, but chanced my arm in contacting him to meet up. Luckily both he and Marouane were having a few days break in Marrakech. From this original contact Marouane and I talked about the future as his English is very good.

Rabat is very different to Marrakech its easy to walk about on foot and hassle free. I mentioned before that it is like Manchester in the sun and with a beach. I first visited Rabat in November last year to specifically meet artists, network and check out the art scene there. I have made friends and numerous contacts to help me and advise me for future development and collaborations. For the travel bursary my aim was to complete a Video I had previously recorded adding sound because my target audience would be the partially blind/blind audience. The trip this time was to collect sound and work on audio ideas. I had plenty of inspiration in Rabat visiting numerous sites to record sound. After meeting with Toufik Elbouchiti to discuss sound (because he is a musician and song writer) I anticipated that he would respond to the song ‘Amazing Grace’ in his own way using the song as a catalyst and as inspiration. After a few weeks we met again and he told me he had written the music and lyrics and that the song was distributed by a director , a lobby a system controller for the role of being blind and your luck, like a flower in rubbish. Your choice has been taken away from you, but then the flower grows and pushes through and the blind start fighting for their cause and rights.

GML PICTURES a Film, Photography and Sound Studio in Rabat 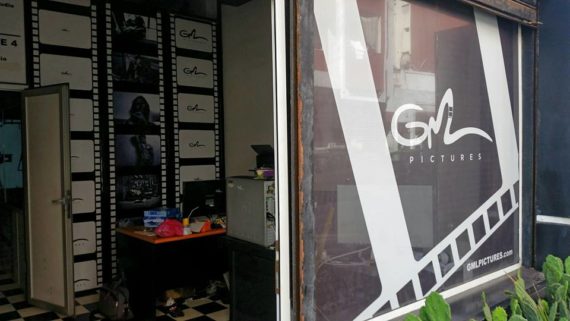 Toufik does not speak English and so I had a translator to help interpret. We booked into the studio and spent the day recording different layers of sound. First Toufik sang Acapella, then with classical guitar followed by an electric guitar. We were working until late in the evening and for the final layer of sound recording we invited the people who were at the studio to sing. It was exciting and fun watching the process of recording. 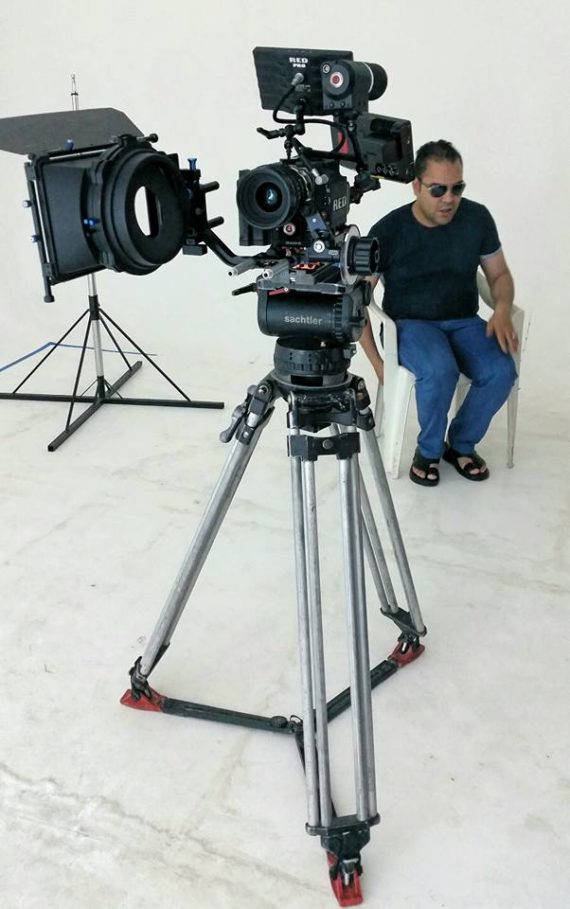 The next day I was back in the studio editing the sound with Marouane who is exceptionally skilled in using an application called Adobe Premier CC2015 Pro.

The final film will be available on Vimeo in the future (Inshallah) as I don’t want to release it just yet as I will be submitting it to the ‘International Film Festival’ where the blind apparently have a venue allocated to them each year. I was clear in communication to Toufik that I did not want the video to be a music video and for Toufik to respond to the world famous song ‘Amazing grace’ in his own manner – in a none Christian way – in order to connect with the audience.

I am very pleased with the final outcome of the film and the sound. The rhythm is very catchy and who knows where this work will lead myself and the other people involved? 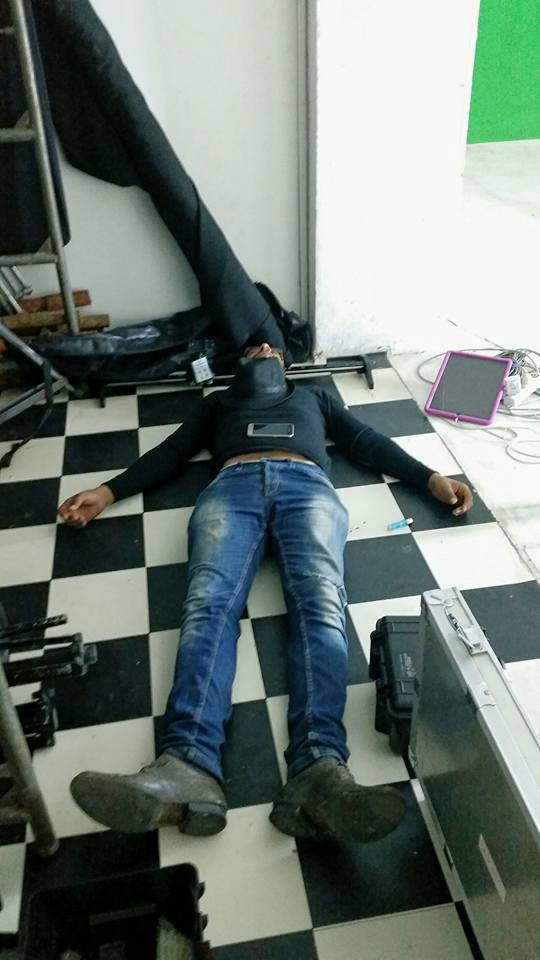 For the time I spent in Rabat I would like to thank Marouane Bahrar and GML studios, Hatim Gueddari, Rachid El Alaoui and Er Rafik Aboubaker and of course the amazing Toufik Elbouchiti  without whose help and guidance the film would be incomplete. 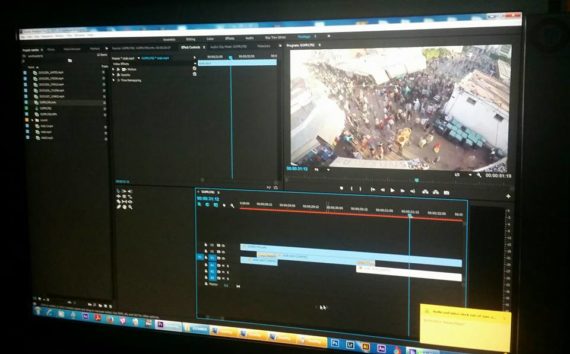 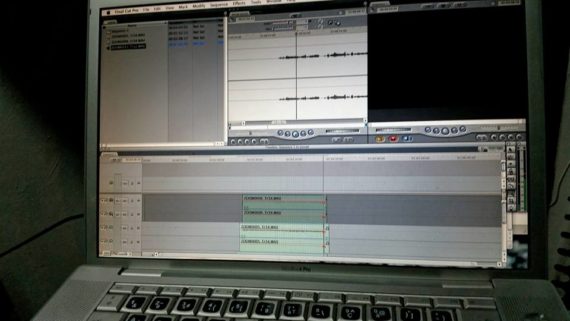 The ‘Mausoleum of Mohammed V’ is a historical building located on the opposite side of the Hassan Tower on the Yacoub al-Mansouresplanade in Rabat. It contains the tombs of the Moroccan king and his two sons, late King Hassan II and Prince Abdallah. The building is considered a masterpiece of modern Alaouite dynasty architecture, with its white silhouette, topped by a typical green tiled roof, green being the colour of Islam. A reader of the Koran is often present, having his assigned seat. Its construction was completed in 1971. Hassan II was buried there following his death in 1999. 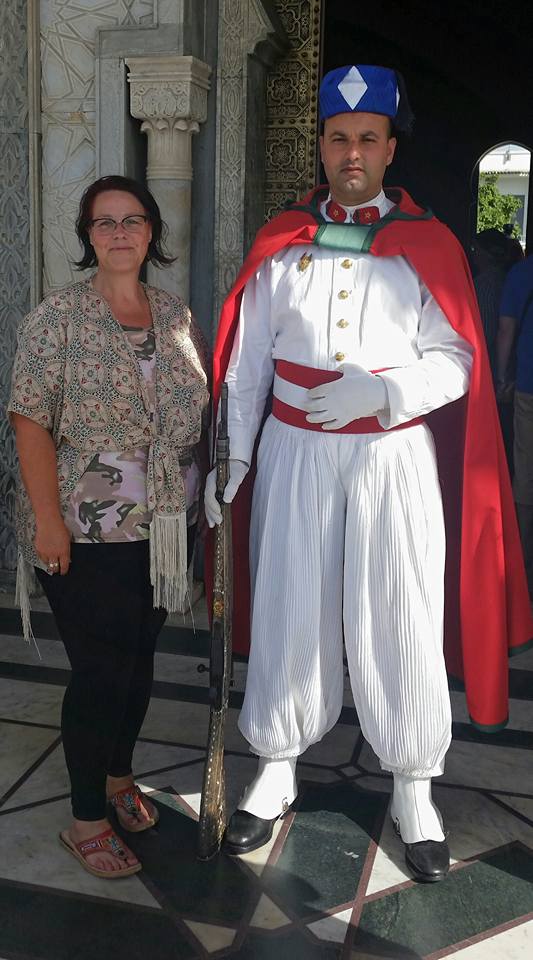 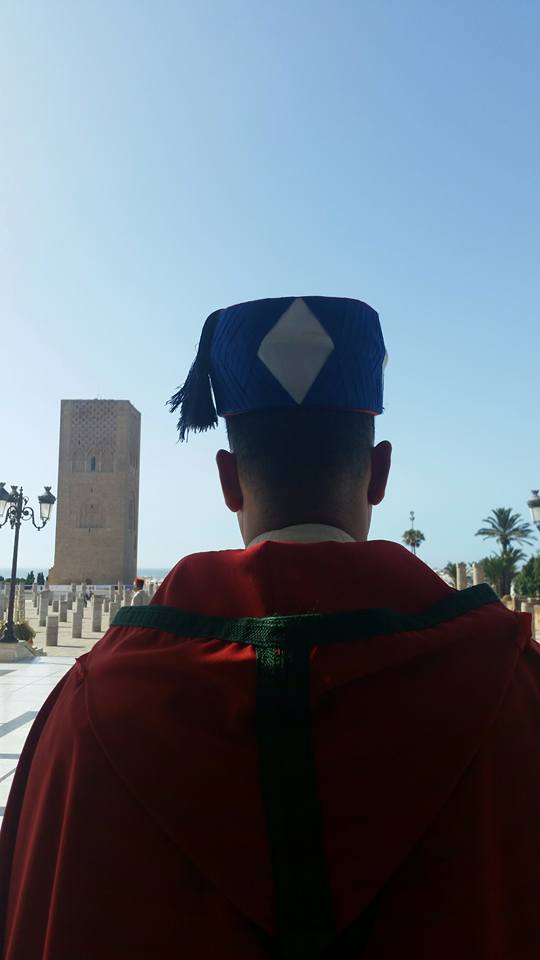 Hassan Tower is the minaret of an incomplete mosque in and began in 1195, the tower was intended to be the largest minaret in the world along with the mosque, also intended to be the world’s largest. In 1199, Sultan Yacub al-Mansour died and construction on the mosque stopped. The tower reached 44 m (140 ft), about half of its intended 86 m (260 ft) height. The rest of the mosque was also left incomplete, with only the beginnings of several walls and 200 columns being constructed. The tower is made of red sandstone, along with the remains of the mosque and the modern Mausoleum of Mohammed V, forms an important historical and tourist complex in Rabat. 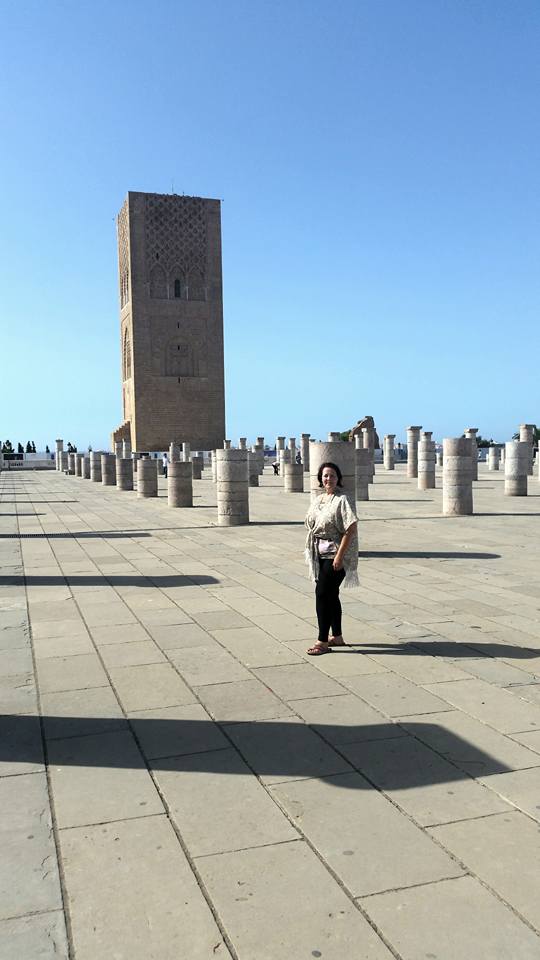 Instead of stairs, the tower is ascended by ramps. The minaret’s ramps would have allowed the muezzin to ride a horse to the top of the tower to issue the call to prayer.

The Mohammed VI Museum Of Modern and Contemporary Art is in the centre of Rabat not far from the train station and near Terminus Hotel Showcasing a sun terrace and views of the city. It is a large sold building having a brightness and lightness with colourful artwork images running along its sides. 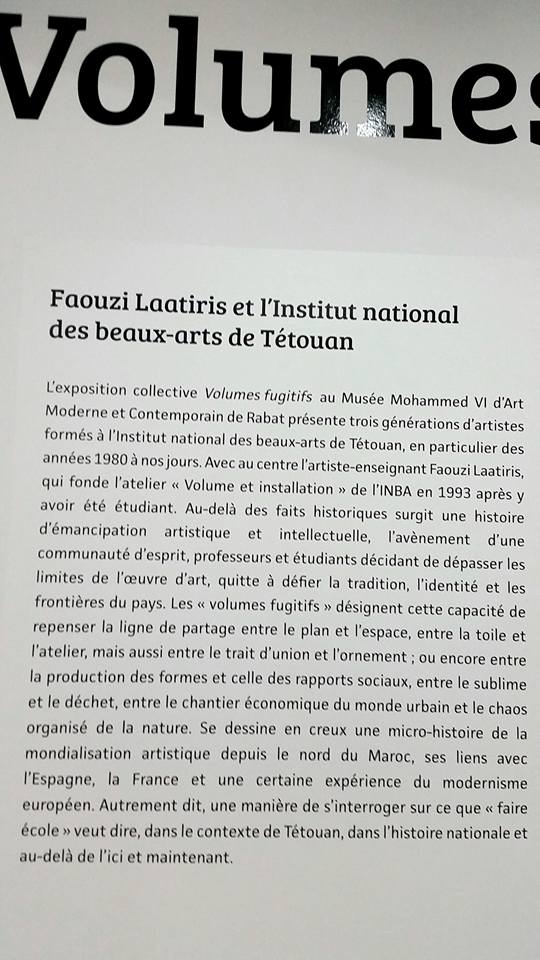 Downstairs is a huge space containing new and Contemporary works, including work by Mohamed Arejdal an artist I met and made friends with at the Marrakech Biennale 6 in February this year. 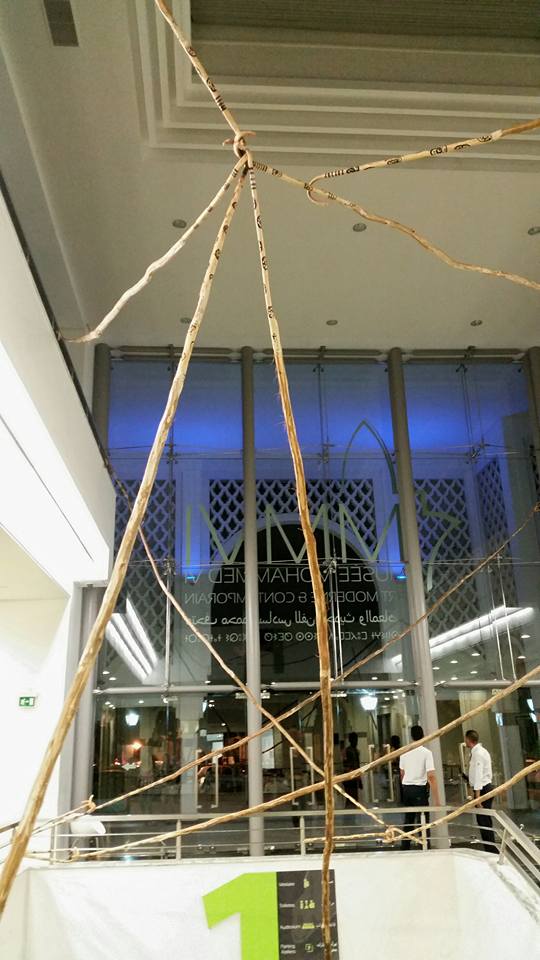 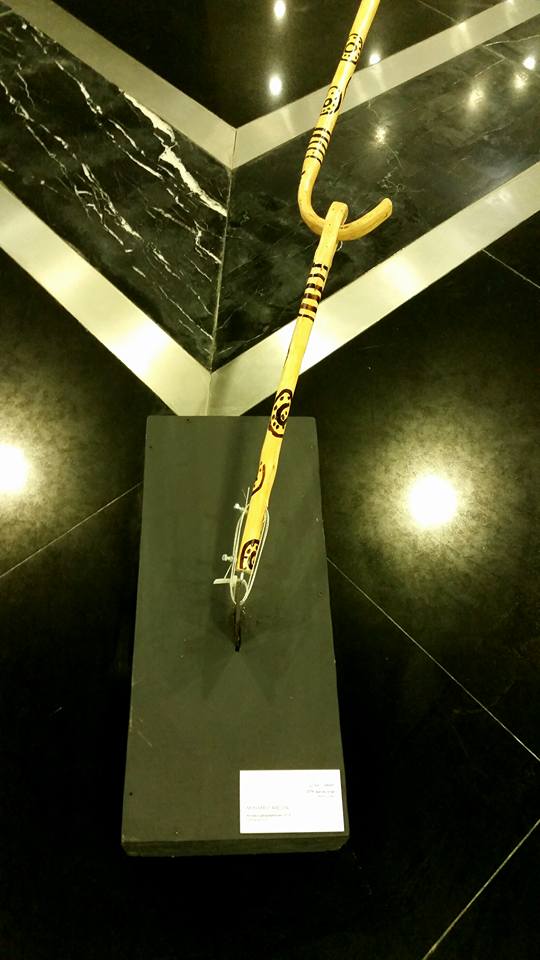 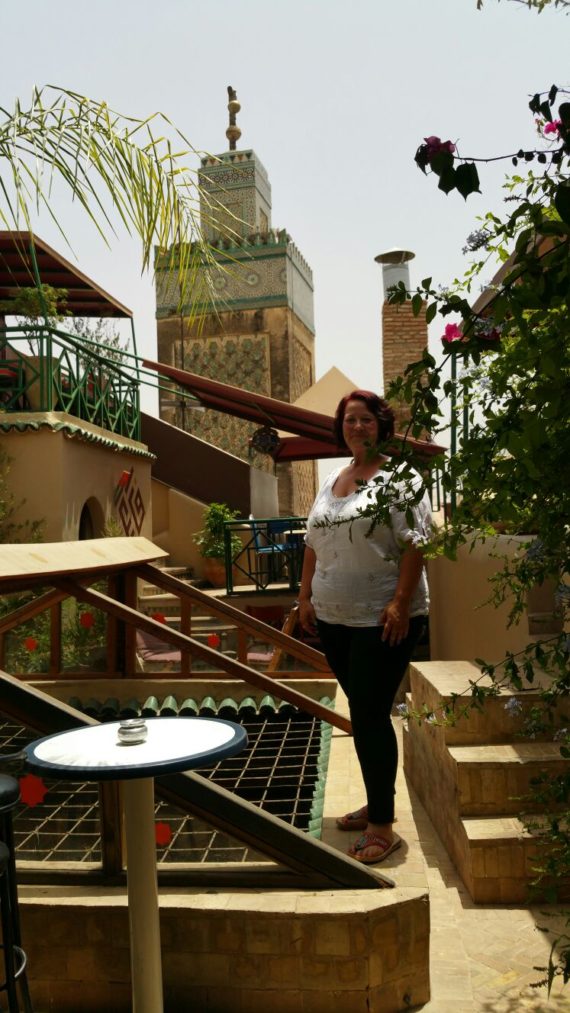 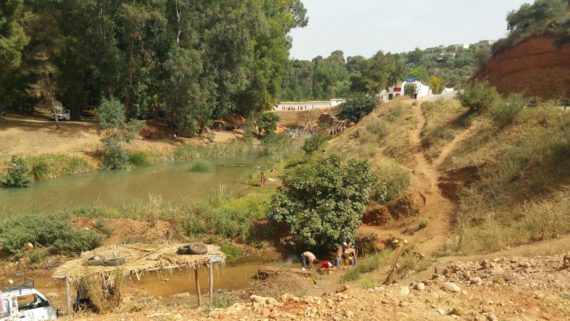 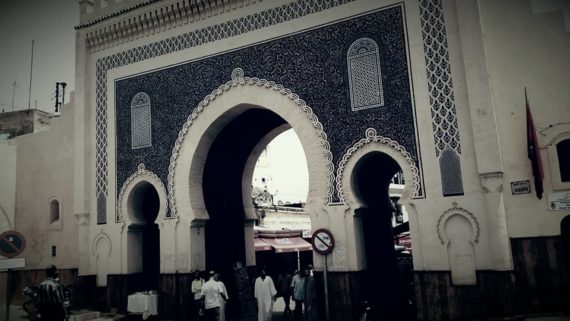 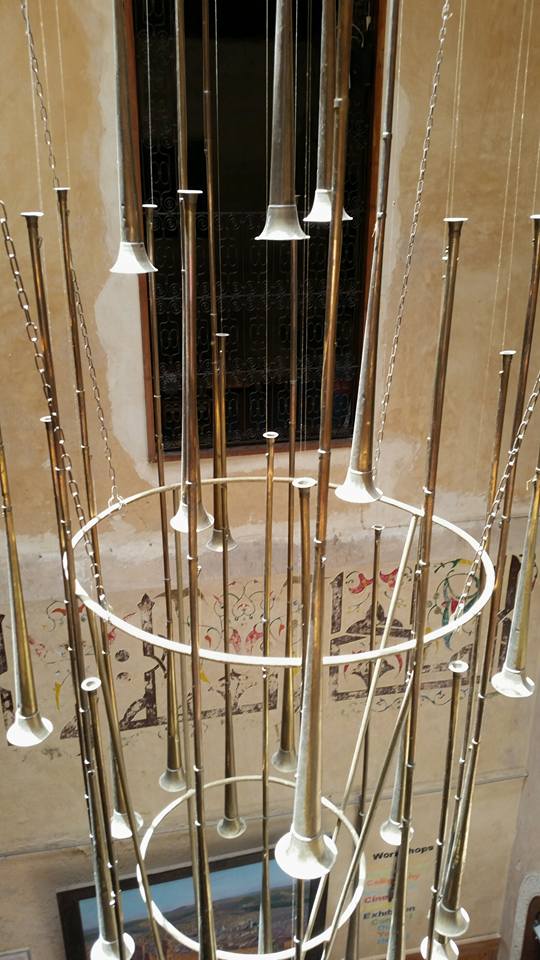 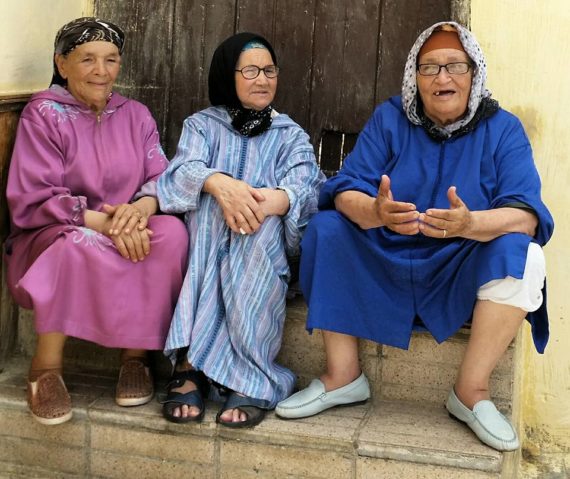 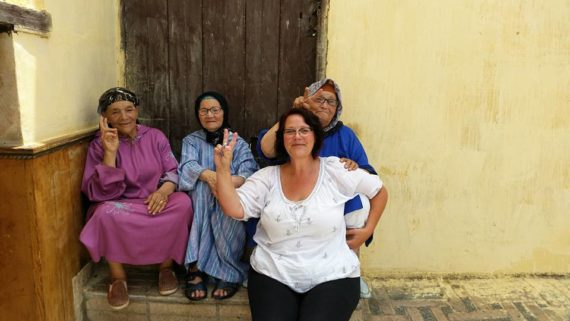 The main aim of the an:travel bursary was to enable me to edit to completion a video I recorded last November in 2015 at the location of Rabat’s Souk. The original proposal was for the ‘Marrakech Biennale 6’ which took place February 2016, however I was not selected for the Parallel Projects. Therefore I decided to still continue with my idea and spent a three weeks self funded visit throughout November/December in 2015.

This enabled me to build up contacts, meeting numerous artists and creatives who potentially may assisted me in the future.

Being granted the an:travel bursary I was able to return this time to record sound, interview people with visual difficulties, create a narrative and edit the awaiting footage which was stored at GML Film Studio. I secured film specialist Marouane Bahrar alongside interpreter and artist Hatim Gueddari to assist me in completing this work.

Originally my concept was to take place at the main Marrakech Souk located at Jemaa el-Fnaa Medina Square and an idea based on the tourist as ‘an outsider’ dealing and negotiating their way amongst the hassle and bartering taking place.

In my own experience I have heard and spoken to tourists about the aggressive selling that takes place and even though they enjoyed the weather and food etc the selling was in their opinion too much. Personally I am outgoing and confident, however when I first encountered the busy souk area to look at the goods on sale and engage with sellers my defences were on the up. I was hesitant with eye contact, feeling slightly vulnerable and anxious and through avoidance of my gaze I was missing out of what was visible.

Rabat is not as tourist driven as Marrakech, the difference for me is like Manchester and London because it’s more relaxed less busy, with hardly any hassle, so therefore the original video idea needed to be altered.

I was introduced to and subsequently hired Toufik Elbouchiti through artist contact Hatim Gueddari and after discussions with them I came to the conclusion Toufik would be the protagonist in the video instead of myself. 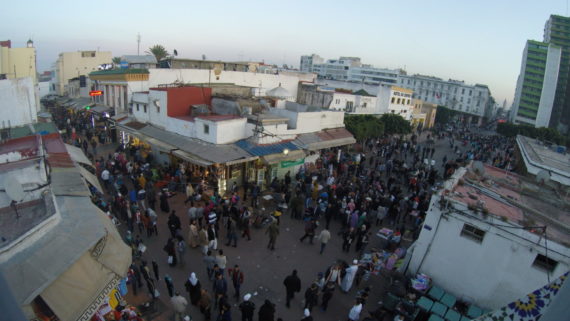 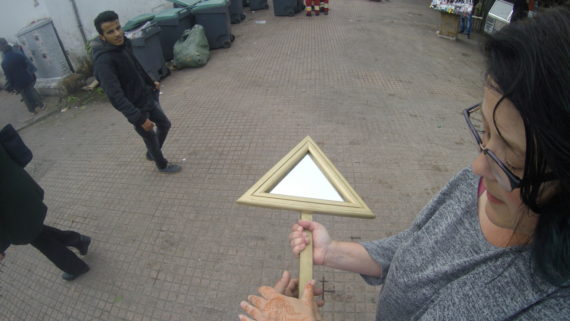 Toufik has contacts with blind organisations and I wish to work with him in contacting his numerous networks to screen the final video that will be made specifically with a Blind audience in mind. I am aware that there may be an opportunity to screen with a blind video programme at the International film festival.

As part of my research I met and audio recorded a gentleman named Mohammed who has been blind since age of 7, telling him about my video and asking him how he engages with films. I told him about Toufik and he instantly knew him and this helped him feeling more at ease through our conversation. Hatim Guedarri was our much needed interpreter and without his help my conversation would have been impossible. 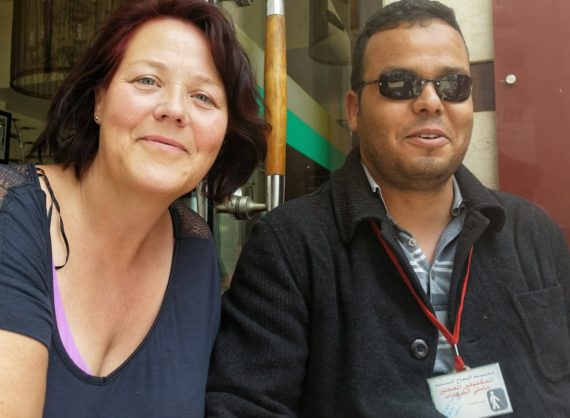