I think one of the best ways to see any place is by foot with my camera in hand and luckily for me Rabat is walkable city, similar to Manchester City centre. There are many painted large scale wall murals within Rabat commissioned and designed for the Jidar Festival. The first I saw is “The Shoe Thief” by Argentinian artist Franco Fasoli (aka Jaz) which is situated just round the corner of where I stayed on arrival. It is colourful and dynamic and certainly catches your eye set in the foreground of the bright blue Moroccan sky. The style is crisp, clear and graphic almost like collage with a strong sense of masculinity. 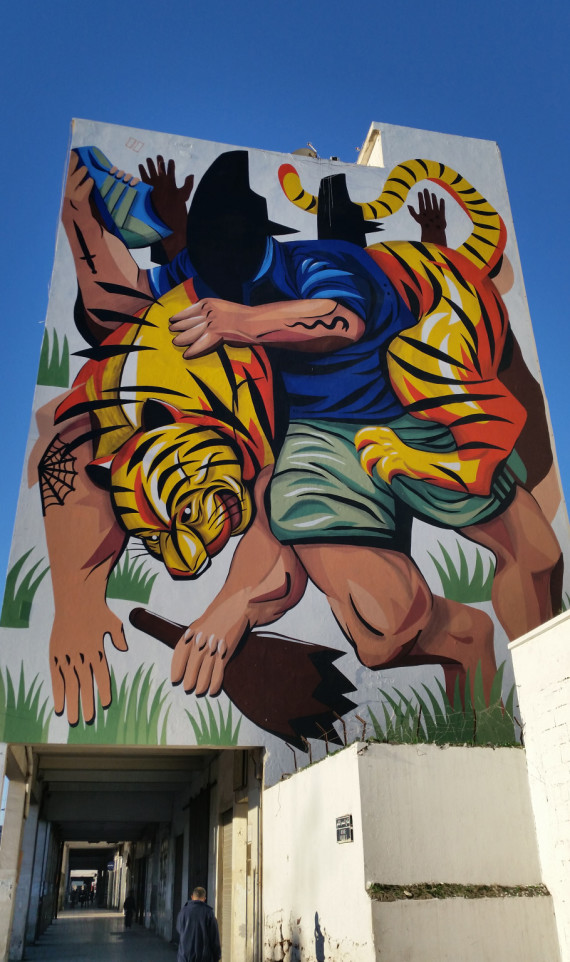 The next work is further out of the centre situated in a residential area on Jacob Mansoir Street. Created by ‘Deih’ a Spanish artist and entitled “Cosmic Balance”. It is a futuristic and vibrant piece. 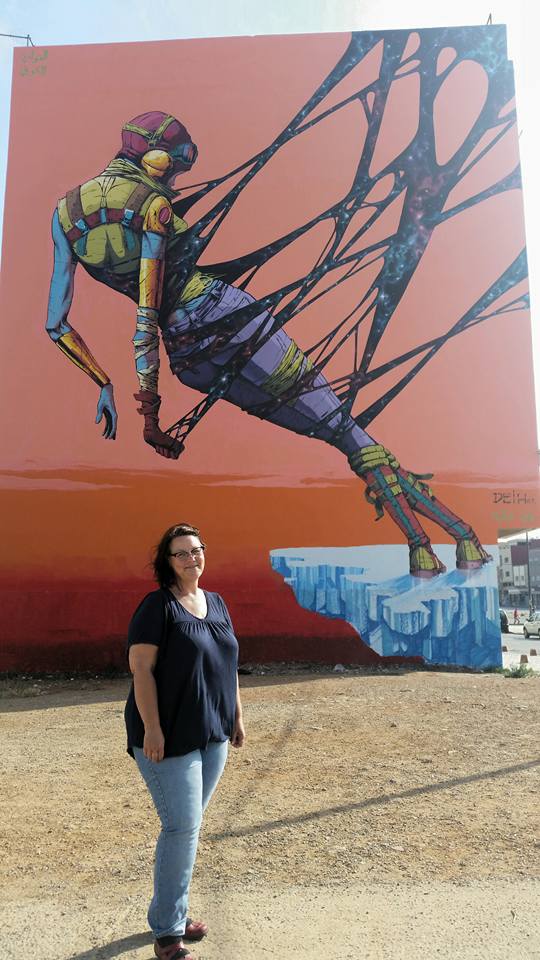 Artist ‘INTI’ is a Chilean muralist depicts a character holding a tiny lamb in its hands. According to INTI its about a Bridge to the european dream and the land with a passage to a better future for sub-saharan immigrants, and a final destination for the vast majority. 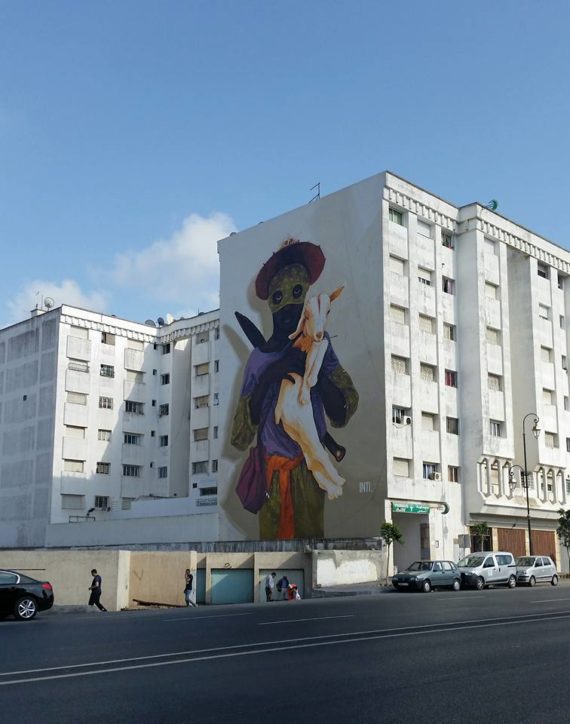 This mandala piece is situated alongside the Souk area right in the centre of Rabat. 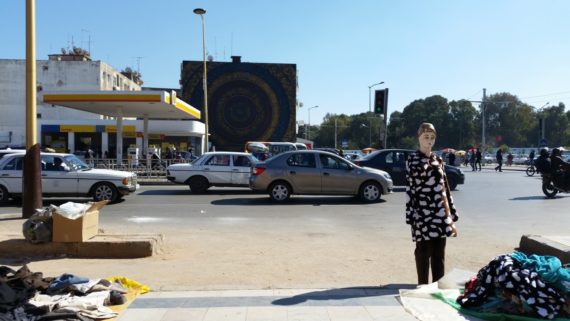 A work I did not get to see is by invited artist Saner from Mexico, known for his figurative works strongly influenced by Mexican tradition and culture. The work is a mixture of the artists native culture along with the local elements, using a bright colours and simple composition, he created a large portrait of a masked man serving tea while standing in the water. Symbolic elements unites the distant traditions of Mexico and Morocco, portraying unity and possibility for people of different cultures to get a long.

You can read and view his mural on

The work below is not far from the medina, however I don’t know the artist who painted it. 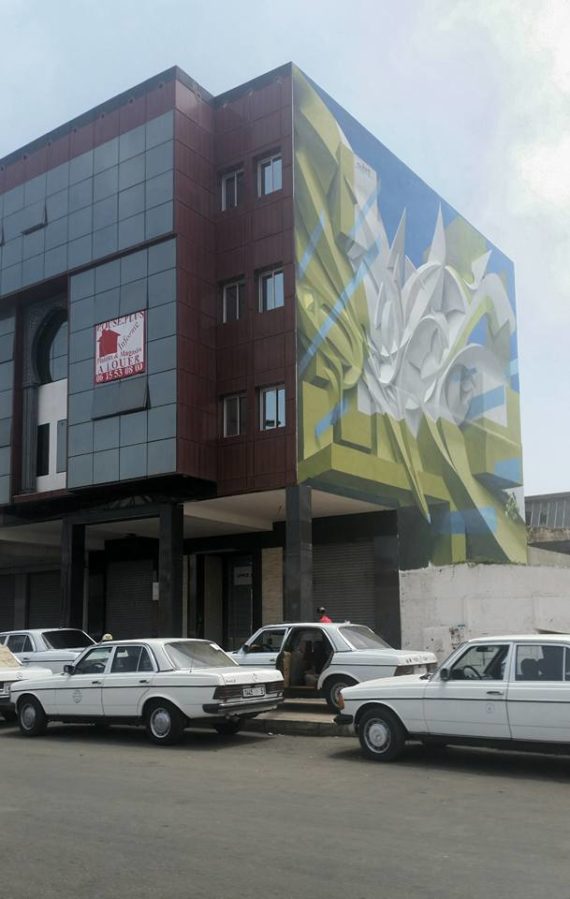 This work i did not see but sourced information from the internet is a collaboration between three Moroccan artists. Artists from around the world are transforming the streets of Morocco’s capital city painting frescoes to decorate the boulevards and residential areas. 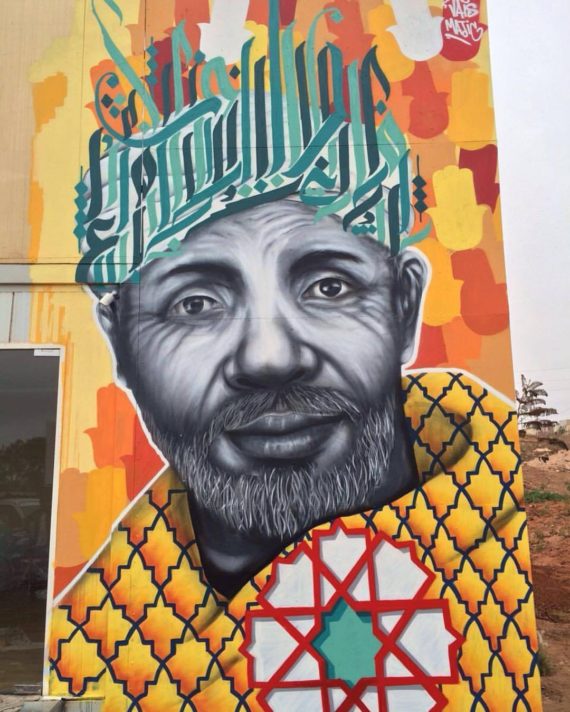 Graffiti artists and mural painters from Morocco and abroad are slowly transforming massive blank canvases into works that will brighten the capital for years to come. It is arduous work for the artists, like Vincent Abade Hafez, better known by his tag ‘Zepha’. His urban calligraphy already decorates numerous cities around the globe.

“Painting a large surface like this is a real challenge indeed, it’s a physical challenge, but not just that, the size, it just changes the whole scale,” said Hafez.

One of the stars of the show is US artist Maya Hayuk. She is best known for her bold geometric patterns, which are constantly and playfully evolving.

From my meetings with Pauline who is based at The British Council in Rabat I was informed about a project with British Council and OCP Fondation who organised “Street Art Caravan”, a celebration of urban art in the Moroccan public space.

The Street Art Caravan aims to awaken the interest of the Moroccan public for urban art especially graffiti, not only through artistic performances that will be conducted in the public space, but also through the various workshops that are going to be organised in collaboration with University and local associations.

The next set of Photographs were taken both in Rabat and also travelling by car to Chefchaouen.