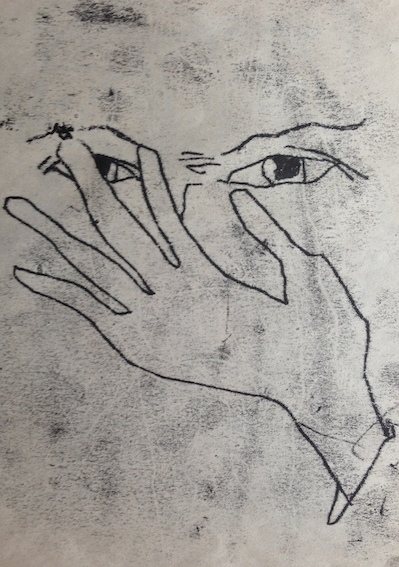 This weekend I opened my studio, to show friends and neighbours where I’m working now, and what I do. Open studios take a lot of time and energy, but it’s really good to have the luxury of talking about individual pieces of work, and work in general, in that relaxed way.

More importantly for me, it was a key marker – I’m here and I’m settled, and now I’m ready to set off on the next big adventure. Which for me is more research and development.

It has made such a difference, too, to be accepted for a national exhibition (Fabric of the Land, Aberdeen Aug-Sept) Opportunities like this are important: they give confidence and help to focus.

Eariler in the week the harvest was brought in – I get so excited this time of year, when I hear the combine enter the field. I had been debating whether I had time to video the event, but as soon as the machine drove past the end of my garden I was hooked again. The next few hours were spent filming! Hope to get editing soon.

Thought I’d take a day out yesterday, to visit the tiny church at Fairfield on Romney Marsh. I’ve been going to the Marsh since I was a toddler, and love its huge open skies and green meadows . Having seen Fairfield Church from a distance, but never visited, I didn’t know what to expect. It’s a little brick building standing on a raised mound surrounded on all sides by dykes – truly picturesque!

The interior has a tiled floor and box pews in white painted wood, very, very simple, both rustic and domestic. A real gem. Most box pews carry a good deal of graffiti, some of it two or three hundred years old or more, but it took a while before I found, at last, just one set of initials under the white paint. There is no churchyard around the building, so no-one to be found who might be the owner of the initials. WF remains a mystery, to me at any rate.

The church seemed to me the perfect setting for the church in the children’s book ‘The Children of Green Knowe’, which I loved to read to my kids. Written by L.M Boston, it’s a magical tale, beautifully written, but not one that is very well known.

I went from Fairfield to St Mary in the Marsh – the church there a real contrast to Fairfield, it has survived since the middle ages. It too had white Georgian box pews, but these were removed in 1910 and replaced with plain pine pews, which themselves haven’t escaped the ravages of beetles. Fine brasses covered by a carpet, and too many folding tables and utility chairs! Edith Nesbit of ‘The Railway Children’ is buried in the churchyard there.

There is something about the Marsh that is mysterious and enchanting-

or do we always have that bond to the place of our earliest memories?

Hoorah! I was really pleased to hear that one of my digital prints has been selected for the Fabric of the Land Exhibition, in Aberdeen, next week. Having looked at the cost of travel I probably won’t make the Opening, but it’s an ambition fulfilled, so I’m really happy with that.

(Fabric of the Land is a series of exhibitions exploring links between art and science and is held in the Geology & Petroleum Geology Department at the University of Aberdeen.)