Me and Cosmo went up the woods the other day to see if there were any signs of wild flowers growing around the oak tree? On the way we met a woman whose sister had a new golden doodle like cosmo, but it had a floating bone in its elbow and they spent £2000 on a leg operation and had to cancel their camping holiday!

We also met a couple with two really aggressive dogs. Not ‘trophy dogs’ like Staff Pit Bull Cross’s, but a Collie and an Alsatian. Peoples explanation of why their dogs behave like this is always interesting and on this occasion it was ‘ever since Sid (the Shnowser who lives in the house with the prize wining bantams) chased the collie right out into the road. Since then just scared of every dog that comes up’.

I was very disappointed to see absolutely see nothing growing on the Radfall mound. The oak tree was equally disapoing as this was our main site and I could see nothing to be enthusiastic about.

When we got home I planted some of the remaing seeds in a bucket, and hope to have more controll over their development and see what things look like when they do grow.

About a month ago Rachael Howfield (Massey) suggested she might describe one of her LOST experiences. I thought that was a great idea: So here’s my debut lost experience!

I started to realise I was a bit lost as Cosmo was never very far away from me. He was not running off to explore too deep in the woods. I carried on walking confident I would turn left onto a track I recognised soon. I was listening to radio 4 on my phone, Front Row and they were discussing Alfred Hitchcock movies……..

I decided I was lost when I started to take more notice of the sounds of the birds in the woods and any noises outside that were not in my head phones. I realised I was not listening to the radio anymore and my senses were heightened.

I climbed over a stile and into a field to see what I could see? The wind turbine that they recently errected at an a local wildlife park was on my left may be a mile away. I was not exactly lost then. I walked about 20-30 minutes around fields trying to find a tarmac road, I could see houses in the distance, but it was’nt happening. So I went back into the woods just out of spite hoping I might recognize any paths. I had been in these woods on a number of occasions. Thing was I had been in there during winter and now there was so much green growth everywhere the paths were not how I remembered them. Which is probably why I was lost in the first place.

This is the totally amazing bit. I went back into the woods and had’nt walked too far and heard a dog barking somewhere? I carried on walking and could see a small tent, just here right deep in the woods. I thought ahh..a kids den, I,ll have a look at that while I’m lost. The barking dog was actually just outside the tent I could see as I got closer. Cosmo was over there and this dog was tied to a tree stump.

Then a bloke came out of the tent and said I should watch where I tread, as his dog had the squirts. He was right and chocolate was apprently the cause. I explained I was totally lost and wanted guidence to Hicks Forstall Road where my car was parked. He said the main track is just over there, follow that all the way and it comes out on that very road.

I felt a split between wanting to be not lost… and staying to talk with this amazing guy. He was not gushing with chat but seemed friendly enough and he did smell of drink. I decided to see if his directions were right. They were good, and the main path was a minutes from his tent, and I am actually very gratefull to him indeed, as I was proper lost.

I have come across alternative communities living like that Wales, but never just a lone guy with a dog in the woods like that. What were the chances of stumbling across him as well. I thought I might buy him a big bag of proper dog food, as a way of thanks. When I got back to my car I found his initial advice had a lot wisdom. It’s a long way to carry it though… a big bag of dog food. I’ll count the yey’s and nays if anyone reads this post, leave a vote for or against giving him and his dog a bag of dog food. 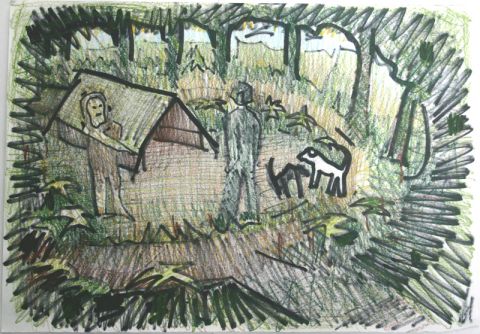 Well this blog is often about not doing art at all, only thinking about it sometimes.

But me and Cosmo did actually create artwork yesterday. I know this may be debateable? We planted some wild flower seeds in the woods together.

A little more background info for you to explain this was part of the Wild Flowers Project in Margate seminar thing I went to. I was given a packet of indiginous wild flower seeds for Margate which I rather randomly spread over Margate in car parks, at the war memorial, randon peoples front gardens, planters, bus stops etc. Kind of geurilla gardening. And the other packet of seeds we were told to plant at home or wherever.

I also planted a furrow of seeds on top of an earth bank, which formed the side of a medievil road which went straight through the woods to Canterbury. This road was called ‘The Radfall’.

I will look forward to passing these places in the future to see if anything really grows there.

Me and Cosmo been spending more time in the woods!

Because the fine weather, summer time and that means people have BBQ's on the beach. In Cosmo's world there is only one thing better that a dead fish on the beach and that is some hapless persons BBQ. Some people dont mind him steeling their sausages and laugh, others totally freek out. Its best to stay away.

Theres been alot of activity in the woods. I went on a 'guided walk' where people could see and have explained the changes going on there.

The areas of pine are being thinned and some areas totally cleared to create open meadow land, where indiginous plants will grow naturally. There will be no planting scheme and whats grows is because of natures way. Oak and silver birch trees have been left. The idea is to enable, mice, snakes, birds, berries, butterflies and plants to return, as the thick pine planting stopped foerest floor habbitats developing.

Here's the surprising bit! They are using great european forests as models to copy which have a kind of bison roaming around, and will instead introduce Highland Cattle and some kind of pony to munch the grass and maintain growth levels. If they munch loads then the animalised areas will increase in size so munching is managed. I wondered if plant goes in the animal and droppings come out, and this was a way of spreading seeds?

Now, I also had visions of stampedes caused by Cosmo, but chestnut trees are being cut down to provide fencing for these large cattle/pony areas.