The rise of sea levels!

It’s persisting down again tonight and we both got a little wet.

We seen the two burmese mountain dogs and the woman who wears the high viz jacket when she walks them. She dosn’t stop talking that woman, she tells me all about her family and friends, like I know them. I dont know who, what shes talking about. There’s Dave and someone who lives in Dorset who breeds ringtailed plovers or something, and that bench there, oh they put it in the wrong place, that one is our one, when Verity died the council put them in its £500. Ted will be out later with my husband. (Ted is another burmese mountain dog, he’s the biggest dog on the manor. Ted and Cosmo kind of grumble bad temperedly when they meet, face up and growl. It never really kicks off like Sid).

We seen a terrier, all mouth them terriers, Cosmo does his little ‘Ali Shuffle’ and side steps them lets them think he’s been seen off good and proper.

I just walked through a puddle about 25 feet long. Cosmo has his puddle he always lays down in, that same puddle. Every time its there he lays in it, even on cold horrible nights he does it.

And then we met this bloke who says he has had his beach hut for about 6-7 years. He says in that time, the distance from the waters edge at high tide to his beach hut has halved!

I dont know if thats true.

I decided to walk along the beach towards Reculver the other day. This is dominated by the wind farm still and as usual it pretty windy but Cosmo, he’s easily pleased and just likes being out, doing his searching thing. Me I am well wrapped up and before long I’ve drifted off into my little world and Cosmo’s absorbed in his. We exchange glances occasionally to check where each other are, this is really unnecessary, as through an osmosis type of thing we know where each other are without having to look anyway.

The North Wind which is one of the four creators lives in the North Star, above what we call ursa minor or the plough, this also looks like a sauce pan. These stars are positioned just above the wind farm.

The North Wind keeps all the stars in this sauce pan and each star has a dream inside. The pan is full with these stars and the 30 turbines blow the stars out of the pan every night. As the stars blow into the sky, one of the dreams may visit you in the night while you are asleep, but the dream always returns to the pan before morning for someone else on another night.

Creation of the Animals: they are formed in the same way as the fish. This happens along the cliffs at Reculver. As bits of the cliff break off and fall into the sea on touching the water the dogs, cats, cows, horses, foxes, squirrels and chickens are all formed. All the different kinds of animals are created in this way, and Reculver has ‘country park’ status because of this, and is protected by the laws of the council.

I have found a stone horse on this beach which never turned into an animal. The process went wrong leaving a stone horse buried in the sand.

Only the head remains visible now. But even that is now slowly sinking back into the ground. There are other animals in the rocks if you look carefully.

Not a walk with Cosmo.

I didn’t walk with Cosmo today beacause I might have had half a larger shandy with my new comrades and brothers of the ‘West End Theatre Goers Collective’, in the Russian Cafe in Shaftsbury Ave.

I might also have sung Stairway to Heaven on the careokee machine. I do seem to remember introducing the band midway through the song Jimmy Page on lead guitar…..John Bonham on drums ………..and John Paul Jones on bass!

To be a rock and not to roll… 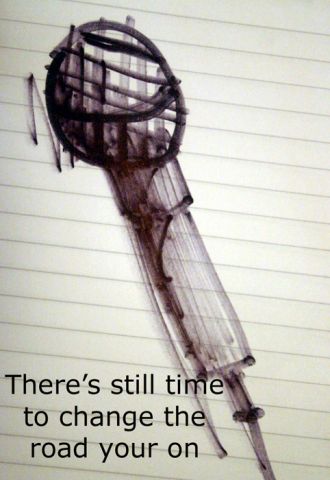 A Local Creation Story. (part one)

If you remember I mentioned I am artist in residence at ‘The Little Blue Hut’ and I’ve been spending a lot of time there looking at the wind farm from the beach hut which is the location for this residency. Even more time than usual, as I spend a lot of time looking at it when me and Cosmo walk along the sea front every evening.

For this evenings dog walk the weather is rubbish, its raining and the wind is bowing very strongly. But in the beginning there were only the winds, the East, the West, the North and South Winds.

After many years the winds moved away, leaving behind them 30 children. These are the white wind turbines in the sea and they manage the surrounding sea and lands. The 30 children formed the birds from winds left behind by their parents, and used the birds to survey the lands their parents had made. The birds knew the sea, the cliffs, the fields, and the forests as they flew over the area. The Blean Forests grew with wild flowers and grasses, from seeds mixed up with dust that formed the lands.

After some while pieces of the land broke off and rolled back into the sea to form oysters and the other fish. In due course these Oysters formed pearls, and spat them out onto the land. The pearls then transformed into the first people, our ancestors and lived as community by the sea, which became Whitstable. The people became known as the ‘Oyster people’.

More commonly named the Lesser Spotted Dogfish, more colloquially known round here as those FCUKNIG FISH that get washed up on the beach.

I did a pre dog walk earlier to check out the beach and could see crows and seagulls were still working, where there were still some remains of washed up Lesser Spotted Dogfish.

Later, on the walk Cosmo’s lead was attached a good 500 yards before this particular section of the beach (which is his favourite at the moment!).

Once the hazzard was passed I was able to remind myself that the glue I was using to make my mosaic had gone rather watery. I make my own glue for this purpose and had made two jars. The unused one, stored in an air tight jar was still all jelly, but the one I was using was open to the air, and over a period of about a month it had broken down and gone too runny. It is making the paper too wet and buckling is a problem. Also I noticed that the paper had got so wet it had soaked through and was well on the way to sticking itself to the table top. As it is so watery it is taking a long time to dry in this damp weather. another problem it would cause would be when I need to cut the mosaic into sections with a scalpal the still slightly damp paper will tear rather than cut. This is to be avoided as well.

So, really I was telling myself that for 15 – 20 minutes of time invested in pouring the glue back into a sauce pan add about another heaped table spoon of flour to thicken it up, a bit more salt to stop it going mouldy and boil it up for a few minutes would make the perfect glue.

This would be time well spent. Perfect jelly like glue enables the mosaic tiles to slide over the surface of the paper easily for accurate positioning. It also has less water in so dries better in these damp conditions and wont buckle the paper quite so much.

The other thing that crossed my mind was that I have two schools projects coming up. One in a rural primary school with children who have started life with an advantage, compared to an urban secondary school where my ‘transition’ group of pupils are definately disadvantaged. I am looking forward to this contrast.

Cosmo is walking home with a slight limp? 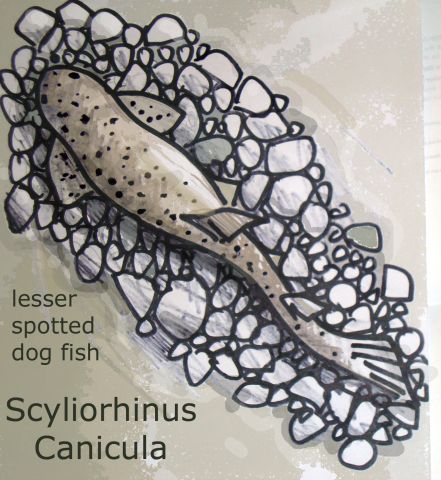