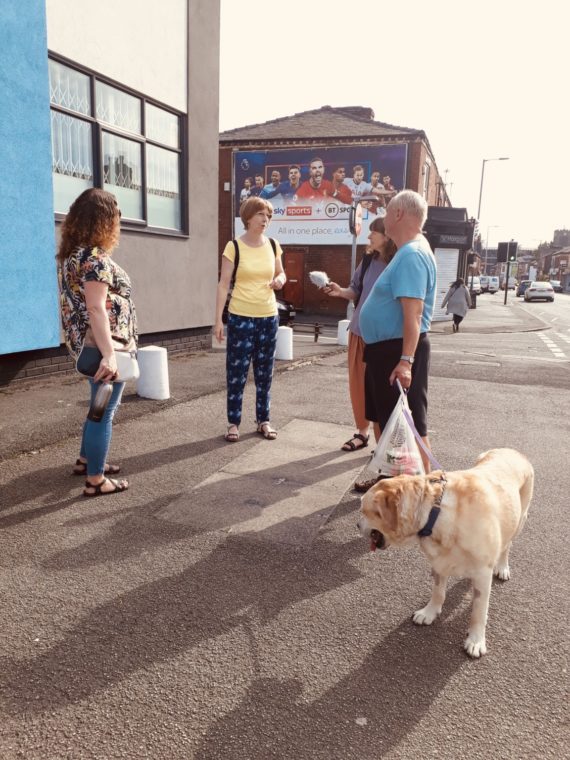 This blog is to document the process of how we work together, what we can learn from each other and how we can continue to collaborate under social distancing restrictions (and beyond).

This project began in May 2020, initiated by Niki Colclough, Artist & Lecturer teaching MA Socially Engaged Practice at the University of Salford. The project began as an enquiry into everyday walking, how walking can connect us to the places we live and the people we share this space with.

Over the summer, when social distancing rules relaxed, Niki was joined by six community members who worked with her to test ideas around walking – on their doorsteps, in local green spaces and in the town centre of Leigh (in close proximity to the Turnpike Art Gallery).

Thinking about the reasons for and benefits of everyday walking as a starting point, two key findings emerged –

That art can be a catalyst : giving a reason to do something extraordinary, or looking at the ordinary in a new way.

That walking, and particularly paying attention to walking in new ways, can be a way of maintaining good mental health : This is a benefit that can be emphasised by the introduction of art thought / action into walking.

Niki was joined by six community members in this initial phase, four of whom have continued this enquiry into the digital sphere. This blog will document how we learn together.

More information on the project can be found at: https://nikicolclough.com/

Now that we are able to meet in person again, we have taken our exploration back to the streets. We are ‘travellers on the urban margins’ inspired by the drifts of the Situationists, we wander along our regular routes, trying to put aside our preconceptions to combine what we do and don’t know.

The core members of the walking group have put forward suggestions for us to workshop in this next testing phase of the project. Using sensory approaches, such as being guided by smell, spotting small natural wonders and musings on bus rides … at this stage we are being open and inquisitive – we have until the end of June to finalise the ideas to be presented to the public in live / printed and digital formats.

It feels good to build slowly, to consider what is important, what is needed and what we can offer.

We are also beginning to open out, invite more people in to take part – including a ART WALK CLUB for all. Regular sessions will begin in the next few weeks, if you are local to Leigh and would like to join in, please email: [email protected] 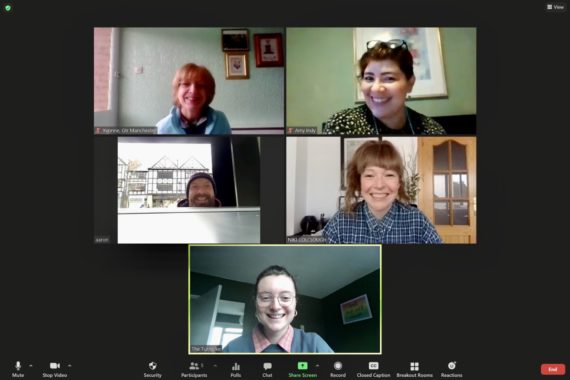 For this meeting I had set the group a question to think about:

What would we like people to get from the experience of participating in a walk?

This question was to uncover some of the motivations for why we might make this artwork together and what we think a public artwork in our local area should do.  I  also thought that is might be useful to see where our ideas align and to have something that we could refer back to as we move into the testing stage of the project.

This will form a kind of manifesto for how we continue working together over the coming months. 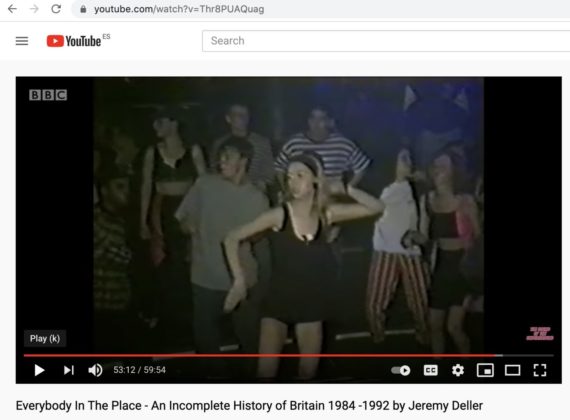 This month I received the news that my proposal for a larger walking work has been commissioned through the Turnpike ACTIVATIONS programme, thanks to Arts Council England. This means that all the ideas the Turnpike Walkers and I have been developing since last Spring can now be put into action.

The ground that we have prepared together feels fertile, our latest meeting was brimming with energy – possibilities – of what we want to say, how we would like to explore. Some of us are thinking about social justice issues, others want to make work for enjoyment, the balance feels good.

Key themes at this point are (as working notes):

Environmental justice and following your nose …

Walking as mark-making (nature connectedness) – the brush of vegetation, changing the path with our presence.

As well as continually reflecting on the process; “it’s a meeting place for radical ideas”, “it’s a place for deeper conversations” and “it’s where we stop sleep walking”. 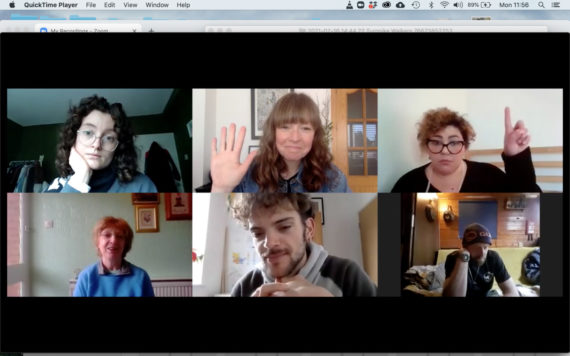 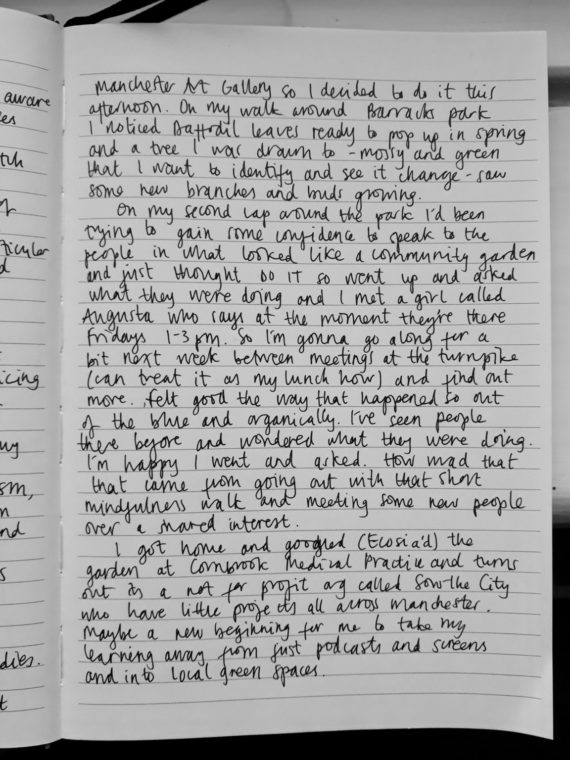 People seem fed up at the moment. Unlike the previous lockdowns, this one doesn’t really have an end in sight. The days feel long but they’re flying by, restless nights lag with unused energy reserves from days spent inside. The weather has been grey.

While I’ve been waiting for something to lift, the stillness of lockdown is making me more aware of patterns and routines, of the people and places around me. I’ve been trying to get out for daily walks around the park next to my flat and find myself drawn to details in nature that signal change and growth, signs of continuance that amble towards life beyond the pandemic. These details feel defiant.

On a lunch break walk a few Fridays ago, I listened to a short audio piece about mindful walking that Niki sent to the group, in preparation for an online group workshop. As I wandered around the park, I saw sprouts of daffodils preparing to burst into spring, and tender new buds on old mossy trees. From my flat window, the park looks square and a bit uninviting with rusting goal posts at either end, but when you’re in it the path meanders between trees and hedges, leading you close to birds hiding in bushes and the damp, collapsed ruins of firework packaging.

In the far corner of the park from my flat, I’d seen what looked to be a community garden behind some railings. Today, there were people in it. It took a second lap around the path to build my confidence, before I just thought DO IT and said hello, asking them what they were doing and if I could join in. I’d caught them at the right time, in the midst of their regular Friday afternoon session. In that little window of time, two routines had aligned.

I returned the following week and was moved by a gardener called Terry making a ledge for bird feed out of an old slice of tree trunk. He secured it between some branches with a mallet and said, ‘This will still be here in 50 years. I won’t, but this will.’ As long as the trees are protected, he added, and it made me think about the way time goes on and the things we can do to make the world feel better for us here now, and for those who come after.

I’m finding new connections with my local green spaces and the people who also gravitate towards them. There’s comfort in having a shared purpose and growth in learning from the different perspectives people bring along: it feels natural. The passing on of knowledge and stories is something I also appreciate about the walking group. Wandering together round Leigh last year during eased restrictions, so many memories were shared from different angles or moments, crossing over and correlating to build up a bigger picture. When I walk through Leigh now, the places we paused at for someone to reflect are now charged with that inherited memory, likely to be passed on again.

At one point we stopped at a wall behind Asda and a lady said, ‘That’s my seat,’ asking Chris to mind out the way so she could sit on it. It seemed she liked to use a step in the wall as an armrest. The group shared some stories and as we walked away, Chris told us it was the lady’s birthday that day.

This post was written by Brit Seaton, Gallery Assistant at the Turnpike. Brit has been supporting the ACTIVATIONS programme and this project since summer 2020, these are some of her reflections on the process so far. Many Thanks to Brit.