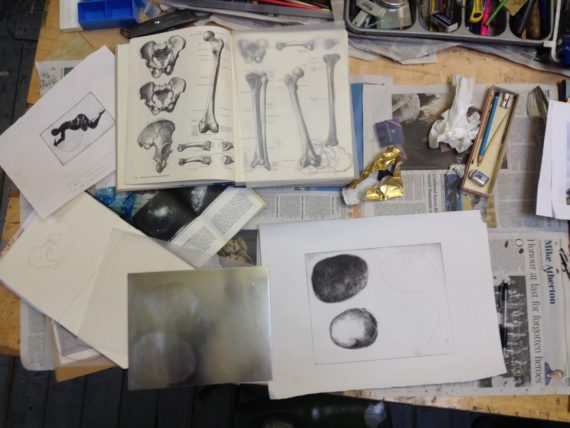 The a-n bursary, apart from funding my printmaking adventures, has afforded me five professional development sessions with Mark Devereux of Mark Devereux Projects.

Originally, this bursary formed part of a bigger research and development project, for which I applied to Arts Council England for funding. I proposed to take time to reflect on my practice to date and figure out the ways in which I would move forward. ACE weren’t as keen on this idea as I was and they said ‘No thanks’. My first two sessions with Mark were all about rewriting and resubmitting my application. More revelations followed, about how I view my work and this particular point I’m at in my career. Together we rebuilt the entire proposal from scratch. Though still a lab for testing and reflecting, the project had changed markedly by the time I submitted my next funding application. Still ACE weren’t keen.

I first met Mark when I took part in StudioBook 2015. This was an intense week of talks – covering subjects such as talking and writing about your work, fundraising, accounts, writing proposals, strategic thinking – and an exhibition with artists’ presentations. It was challenging and I thoroughly enjoyed it. I have used techniques and advice from these sessions many times since. And I still hear Susan Jones’ voice in my head telling us how valuable we artists are. Thanks Susan.

Alongside these adventures and applications life was happening. I got pregnant with my second child which changed my outlook on the future dramatically. Some months later I had a miscarriage which changed my outlook again, though not entirely back to my pre-pregnancy perspective. These happenings have influenced my plans and the focus of my work and have taken time to digest. After a fallow period during autumn and winter I now feel ready for my final two meetings with Mark, to look forward and make plans. Onwards and upwards.