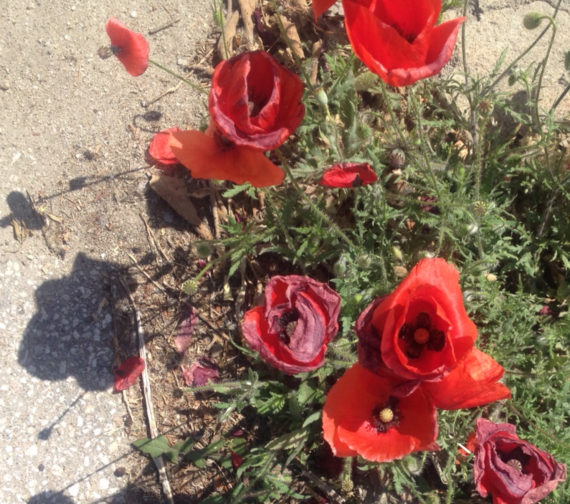 Sun. 19 May
Start the day with breakfast in the garden and S, who runs the hostel brings us warm cheesy dough pastries straight from the bakery, greasy and salty they are ballast for the day ahead. His lovely wife smiles and loads the dishwasher.

The founder of the Process Space Art Festival D us tells us of its origins and P translates, interrupts and makes jokes with him and us. As a young artist in the late 80’s D and his friends decided to create an arts’ festival, not for painting or sculpture, but for performance and conceptual art. At this time there was no money for art, artists or for galleries, which often ran without electricity. Planning loudly one night in his studio D and his friends heard a knocking at the door and a student appeared wanting to know what all the noise was about. The student offered to fund their arts festival if they were quiet so he could study for the next day’s exam. He later gave them fresh dollars in a zipped-up bag and the Process Space Arts Festival was born.

In the afternoon we visit the historical sites of the ancient city of Plovdiv. Roman ruins appear in every part of the city, as fully formed architecture like the amphitheater and as dormant fragments of the forum and stadium. Around the city pale pillars loll on the grass, crumbling city walls nestle in the weeds. Segments of the city are restored with city of culture money and newly found ruins rub noses with the concrete infrastructure being constructed to a chorus of hammer hammer drill drill drill.

H takes us to the old town and shows us around a number of typical bourgeois houses from the nineteenth century. Painted and decorated inside and out in blue and red paint, these houses have bowed fronts often decorated with flowers. The National Revival Style is solid and top heavy, built after 400 years of Turkish rule, to re-assert a Bulgarian identity. The interiors are quite french – walls have trompe d’oeil landscapes in blue and yellow, there are trailing friezes of flowers and leaves, geometric patterned ceilings and leaf litter rugs.

Mon 20 May
To get my bearings I tour of the middle part of city; it is a palimpsest of cultures – Roman, French, Ottoman, Bulgarian, Soviet and late-capitalist corporate hotel. I wander through the narrow half-gentrified streets of the Kapana area which overflows with tiny cafes, bars where young people sit around smoking, talking, looking serious. I enjoy the warmth of the sun on my back, the sticky scent of linden blossom and a sense of freedom and as I move around the city I photograph the sites and collect odds and ends. I enter a strange arcade where the shops are arranged in a horseshoe shape on 3 levels and he ceilings are held aloft by muscular and naked stone men. Twin escalators go down a level, they are mirrored escalators and 80’s electronic music pumps out. At the bottom of the escalator I turn and see endless fragmented reflections of potted plants, ruins and escalators. Looming out of the dimness there is a curved bank of chunky, white marble amphitheater seats. A sudden movement in a corner catches my eye and I see a table-tennis table piled high with white balloons and a young woman is piercing the balloons – pop pop pop. 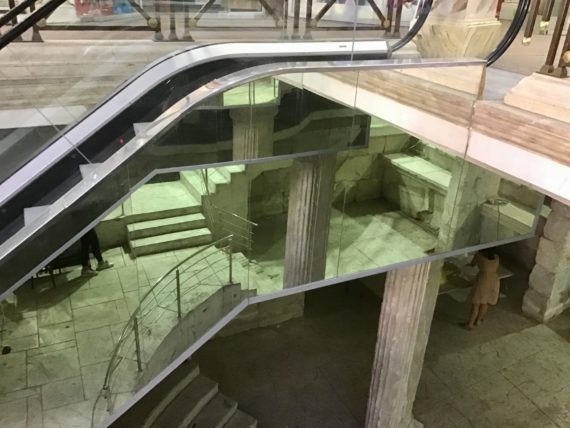 By mid afternoon I feel a bit unsettled, I review my photographs from earlier, scour my maps, make some marks in my journal, but don’t know what I want to make or do. Some artists have arrived with very clear plans, others have ready made objects that will be planted somewhere – I have nothing beyond some speculatively chosen materials and tools – Gulp !

In the evening we squash into the stifling hostel sitting room and listen to the artists making their presentations. These sessions are informative, engrossing and we begin to get a clearer sense of each other. Slowly the group reveals its constituent parts – aloof ‘dominant’ male, mother hen, sisterly groups, lone rangers, and marginal players.

Following presentations we are ready to eat and head to the local restaurant for a full-on meal. We find it hard to judge the quantities of food and for the first few evenings we have either mountains of food or scanty morsels ! The food is good – fresh, local, plentiful, unfussy and cheese is always served, one cheese in a hundred different guises.

Fri. 17 May
Arrive at 8 pm as dusk settles over the small, neat and very new airport at Plovdiv, the air smells hot and a chain of mountains crouch in the distance. P. greets me, she is keen and smiling, she hugs me and holds my hand and pulls me towards a big black car and our driver.

In town we head to a restaurant chattering all the way. We go upstairs and the darkness is interrupted by dull lamps and large leaved trees. We are upstairs but still outside. Wooden tables and benches are set out on the dark covered terrace and a cool breeze disrupts the heavy odours of cooking – olive oil, herbs, seared meat. It feels a bit like a holiday, the anticipation and new sensations and the normality of outdoor eating – slowly and with pleasure

It is good to meet again artist friends from previous projects and new friends – from Norway, Czech Republic and Poland. The atmosphere is genial and hopeful and everyone is eating, drinking, smoking, talking in an incessant flow. A waiter in an embroidered waistcoat and full-bottomed breeches brings a huge shopshka salad with fried potatoes and beer which quickly fills a hungry gap, but everyone is tired from travel and ready to sleep. At the hostel I choose the big attic room with heavy wooden beams, and share it with 3 others, the other rooms are much smaller with bunk beds. 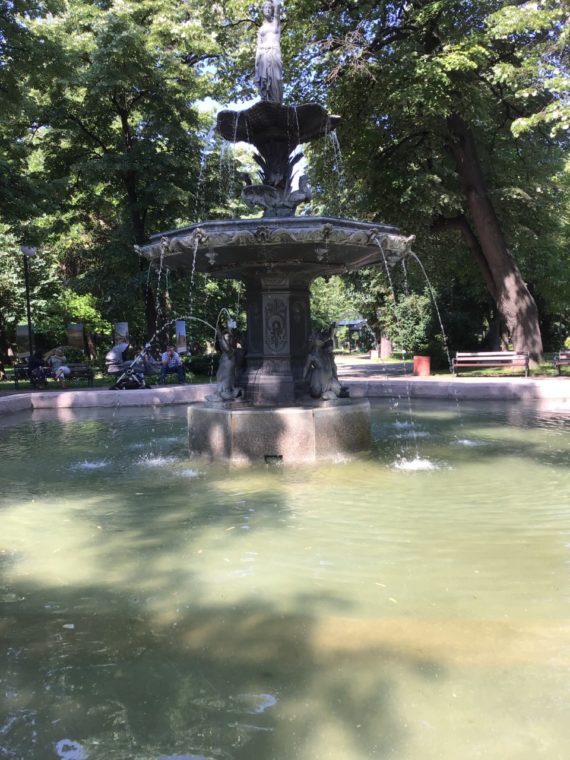 Sat. 18 May
Today we explore the town, we have a tight schedule and M patiently guides us round the city, galleries, second hand shops, the ice cream parlour and the singing fountain – which is empty and silent. We visit a contemporary art gallery housed in a former tobacco factory. The work is interesting, modest and not overly slick; antagonism to decades of soviet rule and subsequent moves towards hi-octane capitalism seeps into much of it. On the way out, we pass a room of people listening to and making movements to a quartet, the audience looks well heeled yet those who are performing look pale and threadbare. Then we head to Tsar Simeon’s Garden and sit in shady cool by one of many sparkling fountains for an hour, watching the fountain, talking, planning – getting to know each other.

At six all 17 of us gather to walk in dribs and drabs to an opening event on the steps of the Church of the Holy Mother of God. We find a bronze woman cradling a male body, their faces very close and and thinly veiled, a modern pieta in a nineteenth century style. The artist, Oda Jaune, mourns her lost son and harks back to the sensibility of another century. We stand around looking, pondering and being photographed. A curator makes a speech, I look around hopefully for a glass of something but there is none. The artist’s name means ‘yellow’ and several artists and passersby are wearing yellow so they are hastily assembled to pose for a photo in front of the lugubrious bronze.

We then enter the courtyard of a rather grand hotel, tables are laid quite formally with white linen and sparkling glass and there is a kind of hush as the sun goes down behind us.
I think of Chekhov’s The Cherry Orchard but am not sure why. We are quite informal, perhaps a little loud, dressed in jeans and trainers, t shirts and shorts. Our sponsor Mr.B, expensively casual, is hosting a meal for the artists and greets us with generous speeches and open armed gestures. We are well regarded as artists, which feels surprising. We eat and drink and listen to more speeches, the rakia and wine making everything soft and amenable.