'Proposal for an empty window' was my response to being asked to produce some work to go in the AirSpace window between exhibitions in October 2007. The initial concept was to install a tree to fill the window and challenge passers by with its presence. Issues around timescale and physical installation modified the concept to be come a log. This naturally split into 2 phases, firstly the 'proposal' which was a drawing of the inside of the window and proposed log in blue masking tape applied to the inside of the glass. The inside of the window married up with the drawing from one specific viewpoint. Moving past the window created a series of changing perspective relationships between the drawing and the interior. The second phase was the 'installation' on 18th December 2007. Again a drawing of the interior of the window space was drawn, this time in black but on the actual elements being drawn. A drawing of itself. The log was then installed in situ. Due to limited access into the window space and the size of the log, the log had to be placed from top left to bottom right rather than as it had been originally proposed. The piece will be dismantled at the end of January 2008.'
Phil Rawle 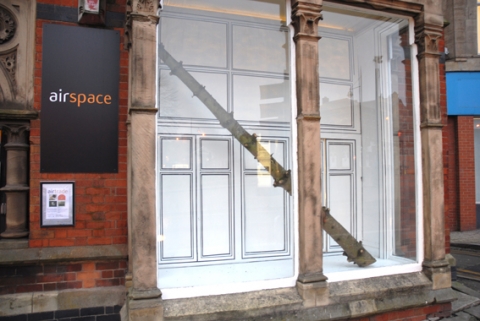 With more than 70 great pieces of art work, lots of preparation and one night of fun: the AirSpace auction was a success. The auction raising over £5000! 25% of which will go to the artists that donated their work. The money raised will go towards running the gallery for the following months, allowing us to hold further exhibitions and keep the AirSpace name alive in Stoke on Trent.

Mike Wolfe delivered a great performance as auctioneer, persuading most of the audience to trade generous amounts of cash for original artworks. AirSpace’s first contemporary auction allowed local art collectors to get there hands on great artwork at a price they could afford. The Pavillion at Staffordshire University was full of people eager to take advantage of the opportunity.

Most of the artwork at the auction sold; local artist Rachel Grant raised a brilliant sum of money for the gallery, her artwork ‘untitled’ sold for £270. Adam James a past exhibitor at the gallery sold three pieces ’70 Famous Psychiatrists’ ‘Entrance’ and ‘Earthbound’ totalling £445. Other works, such as Martina Mullany and Common Culture were snapped up at the end, having not reached their reserve prices during the auction. There are still some artworks for sale on the AirSpace website www.airspacegallery.org.

Thank you to everyone involved!

The support of the artists, the organisers and the buyers has helped to keep AirSpace running, it is great to know that the passion to keep AirSpace here is still strong and we endeavour to return the favour by continuing to provide Stoke on Trent with exciting and new exhibitions.