The exhibition will run between the 7th March and 15th of April, it will also break with the usual format of exhibitions with the show and the works in it being split into three smaller exhibitions, making for a vibrant and changing environment for the viewer.

This exhibition brings together artists who have become associated with the AirSpace gallery. It includes work from studio artists and other artist who have been involved with the project since it’s inception.The works included in the show come from a diverse range of artists practices, and is the second members show, following on from the success of 2007s ‘Shortcuts’ exhibition.The show itself has been curated by the gallery and Sam Knight, an exhibiting artist who is currently in the final year of her degree at Staffordshire University. Sam has been working on the ‘Play’ exhibition with AirSpace for a chance to experience working in a gallery environment and in the role of a curator.The ideas behind the theme of the exhibition have allowed for the artists to take, what otherwise be a common place word and activity, and put their own unique slant on the subject. ‘Play’ today is such a commonplace activity, when thinking of the amount of leisure pursuits that take place, that it has in many ways lost the magic that it might once have held, especially as a child. Chris Parks’ work looks at a more adult and sexual idea of the word play, choosing to use sex toys as an element of the work. Brian Holdcroft takes an approach of playing with the medium he is using. The work makes use of Super8 film and through playing with the pace of the film creates a disorientating environment for the viewer. David Bethell takes a whimsical look at the idea of childhood play activities through animation and a childlike ‘Den’ Installation. Katie Shipley has looked at another aspect of theme, choosing to create an interactive piece in the form of a giant Newton’s Cradle, the ubiquitous executive desk accessory reproduced on a massive scale. 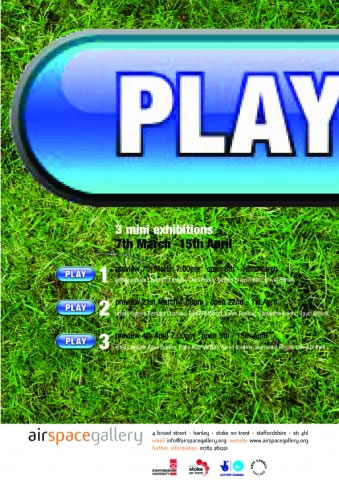