Jin Han Lee – Beyond and Within

as part of Dialogue Box

An easy explanation of my current paintings is the awkward and strange relationship between layers created by using masking tape. I create edged patterns, gradation, and big brushstrokes. I want to disorientate the viewer through the various techniques employed in my paintings, the dynamic created through use of spontaneous and planned actions within each work reinforcing this state. Tension and spontaneity are repeated between images and layers.
By using “masking,” I am producing something that is not a picture in a picture. My method is to paint over the masking tape then remove the tape so that the act of masking is an act of drawing. The act of painting is not simply just placing colour onto the canvas but also the removal of the masking tape which cuts through the colour.

Using masking tape allows me the chance to focus on each image, as to show the image, I have to block the image. There is a disjointed space within the image, between what is seen before and after the masking tape is removed, by cutting the tape I expose the core.

bernard charnley – the instability of spaces

as part of Dialogue Box-AirSpace window

The installation of paintings comment on the paradox of fragility but strength of spaces, the ones we construct in our heads or those social and personal that we occupy, shape and exchange with everyday.

In location in the dialogue box, the floating random double suspension of the images in their box frames, and of the frames in the window space, opens a colourful conversation in the air. It is a playful exchange on its own tensions and contradictions that speaks also to the dynamics of our own desires and dreams.

The show opened on the 26th June, introducing Stoke on Trent to Shaun Doyle and Mally Mallinson’s Devolution Theory. A theory that sees a Tesco dystopia where the human skeletal structure has devolved to cater for the new Tesco life, where the young are enrolled into the compulsory Tesco Youth and Tesco monuments are built to celebrate the chain.

A combination of strangely realistic skeleton figures and museum like artefacts create a history for our predicted future, the show is predominantly amusing, the children at the pre-view were seen to be pointing and laughing at the figures. Yet at the same time there are haunting undertones, could this actually happen? Or is it already happening? It was recently reported that the sale of forks was massively out numbering the sale of knives, could this be the beginning of our downfall, one hand shovels food while the other rests on the television remote. It could be that we are closer than we think to the fork shovelling seen in Doyle and Mallinson’s videos. 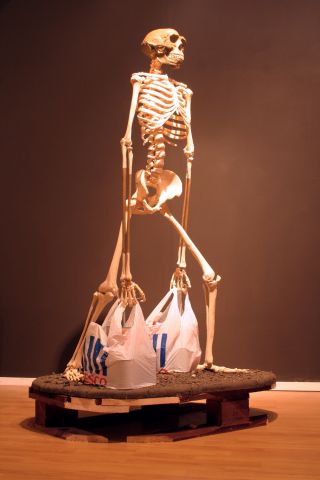