It is a fact of space science that there is such a body in the universe as a black hole; in a theory of quantum physics is proposed that at the centre of such a structure there is a form known as a singularity. A singularity it is surmised may provide a gateway between our universe and an infinite number of alternatives, which run unseen alongside our own. The theoretical notion of infinite alternatives may in some way relate to our own fantasies of alternative realities in which we may have taken different paths at one point or another in our lives. Who or what would we be if we had turned left instead of right, rich and famous, happy. We always lean towards the positive, in some way feeling that our current experiences are somehow in complete, and that there must be somewhere better.

The four artists that feature in “The Never Ending Multi-Story” have not only just encountered their own singularity, in graduating from their respective arts degrees, but also explore ideas of alternatives through their works. These ideas document our relationship with our environment and how we exist there. Power, struggle, harmony, fragility and conflict are among some of the elements that are contained within the artists’ works. 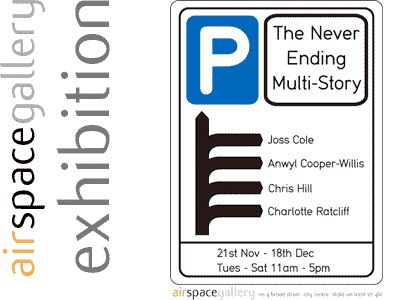