Airspace Gallery is pleased to present Journeymen, an exhibition that brings the works of David Blandy and Antti Laitinen together for the first time.

In a cursory sense David Blandy and Antti Laitinen could be described as Journey-men, in that their work is derived from types of quest, endeavour and travel. The correct meaning of the word journeymen actually describes a certain kind of tradesmen and references the training required to master certain skills. This term, dating back to Middle English, is very appropriate for these two particular artists. For Blandy, his interest in characters such as Grasshopper (from the television series Kung Fu), the Crossroads legend of the Mississippi Delta Blues and the mastery of levels in the computer game Street Fighter, indicate that a sense of training has a central role in his work. In Laitinen’s works, that pit him against natural elements or materials, the activities could easily be characterised as quests, or tests, in which he sets out to achieve difficult and very palpable tasks. It is as if the attempt were a way into a new enlightenment, akin to initiation rituals, these acts seem to fulfil a mastery or personal journey into achievement.

Conjunction 10 : ESCAPE, took place at various venues in Stoke’s city centre and beyond. This is the second year that this innovative project has taken place as a contemporary art biennial for the city, and is a project which is looking to the future and exploring different aspects of the life of contemporary art and its relationship to the city.

This year conjunction was working to the theme of escape artists were invited and were selected from an open submission, to produce work which responded to the theme.

The three main venues this year were The Potteries Museum & Art Gallery, AirSpace Gallery and Staffordshire University’s New Cadman Gallery. The show at the Potteries Museum & Art Gallery, made use of the museums collection of artwork, and through an innovative use of text made relationships between the artworks and the places and ideas that they represented, turning the sculpture court gallery into vivid and bold statement. The exhibition seemed to talk about the ideal of travel and the idea of an alternative existence. For me the strongest works in the show and the ones which best summed up the idea of ‘Escape’ were a little closer to home than the other works. John Curry’s large photographic prints made at the 1986 Garden Festival hosted in that by Stoke-on-Trent, were bold and mesmerising, and armed with a knowledge of the area of the city that was the subject matter presented both a familiar yet far removed vision. The stilt walkers, performers, and general public that are the subjects of these images are unusual but do not appear to be out of place within their faux natural, and landscaped surroundings. The work is a documentary of a time when a former industrial dumping ground and area of outstanding natural horror was transformed, and yet today the place can be contrasted again as it has almost reverted back to nature, with the trimmings of modern consumer life surrounding it.

The exhibition at AirSpace Gallery again was one of contrasts, the varied work found within explored a diversity of ideas of Escape, some pieces set them selves apart from the others while some seemed to complement the ideas behind others but presented them in a radically different way. The work of Juneau Projects installation was both refreshing and addictive, their work falls somewhere between installation, live art, and music. Their piece in this show “Echo Boom” made use of both high-end technology and low-end techniques to create an installation that the viewer became a part of. A bank of computers, screens and projectors used self generating sound and cutout animations created a scene of technological disarray. The viewer walking past the installation activated the sounds which in turn activated the animations. For me the key thing was the randomness of the piece both through the sound, it’s appearance and the need for someone to be present in order to breath life into it. The idea of escape was multiple, escape through sound, technology and invention, and though the physicality of the piece.

Conjunction 10 saw the inaugural exhibition at Staffordshire University’s Cadman Gallery, for me the key aspect of this part of the biennial was its proximity to a place of learning and giving students access to exciting contemporary artwork right on their doorstep. Work which ordinarily would entail a trek to go and see.

Conjunction this year saw a number of activities taking place alongside the exhibition programme. A series of talks and seminars gave people access to the artists involved in the biennial as well as exploring subjects such as collecting, and regeneration.

The main body of the programme concluded on the 27th of November with a day of Live Art taking place across all the city centre venues. It was a day of contrasts and the unexpected, which took all those who attended on a rollercoaster ride of experiences, including fire escapes with bouncers deciding who could leave the building, intense hardcore punk being contained, and a vision of Ancient Greek Gods fallen from grace into a pit of alcohol and Ambrosia custard. 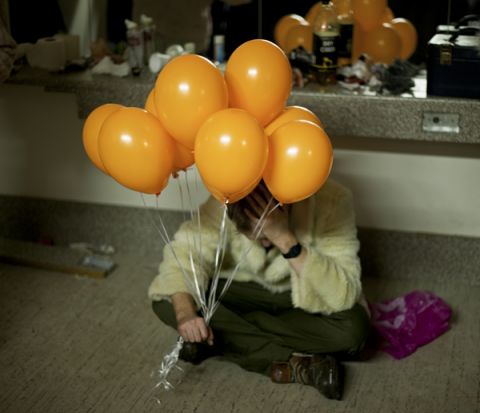