Conjunction 08 festival is in full swing with Artist talks and guided tours still taking place, including Gayle Chong Kwan’s talk on the 5th this week at Staffordshire University. Gemma Thomas has been keeping a blog for the festival on the Conjunction website www.conjunction.org.uk so you can catch up on anything you have missed and keep track of everything that’s going on.

AirSpace will be hosting their next exhibition ‘Trying to Cope With Things That Aren’t Human (part 1)’ in March 2009. Curated by Ian Brown the show will be touring from San Francisco. In the mean time we will be hosting some exciting events to whet your appetite. 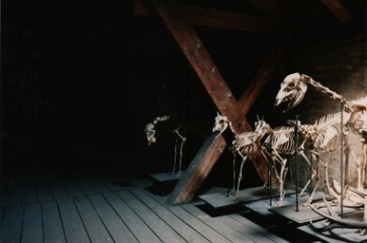 Gayle Chong Kwan will discuss her artwork, which can be seen as part of the Conjunction 08 Festival at The Potteries Museum and Art Gallery, and will relate that to the other works and commissions she has produced during her career.

For more information on the festival please see www.conjunction.org.uk

Last night two members of the public tried to rescue a man whose voice could be heard calling for help from the boot of a crashed car at Staffordshire University. The Good Samaritans smashed into the front of the car in order to reach the boot only to find that the voice was a recording on loop as part of the new art work by Littlewhitehead. The piece was commissioned as part of the Conjunction 08 festival, Stoke on Trent’s Arts Biennial organised by AirSpace Gallery and partners.

Littlewhitehead are muliti sensory installation artists who play with ideas of reality and fiction. This is the second time that the Glaswegian duo’s work has caused extreme reactions in the public. Their work in the New Contemporaries exhibition, as part of the Liverpool Biennial, has recently been attacked by members of the public; where visitors to the exhibition were seen punching and kicking life size hooded and balaclava clad figures

The Conjunction festival runs until the 13th December across various places in Stoke on Trent’s City Centre, including AirSpace Gallery. For more information please see www.conjunction.org.uk or call 01782 261221 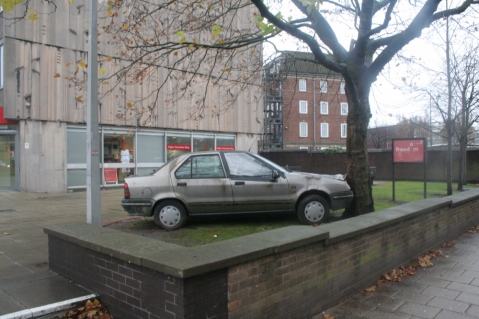 'Conjunction 08 will open on 7th November across the city and will run until 13th December 2008. The festival will involve over 30 artists, including 25 new commissions by artists of international, national and regional significance. The theme is FANTASTIC, FOUND and FAKE, and it is to this stimulus that the artists have been invited to respond, seeking the extraordinary in the everyday.'

So we are drawing near to the opening of the festival and there is a buzz about the gallery. Artists have been coming and going all week installing their work. Including Stephanie Davidson's 'Found Space Tiles' that has been installed in the bathroom of the AriSpace Gallery. The pristine white wall tiles serve as a contrast to the fading paint work and the mirror a little unwelcome when you're not expecting it! But the back rest proves a comforting addition to the space. We are excited to see the rest of the artwork taking shape across the city.

The festival opens on the 7th November 6pm-8pm at the Potteries Museum and Art Gallery, Bethesda Street, Hanley.

Johanna Hallsten’s latest work begins in the window of the AirSpace Gallery, whilst looking into the Gallery window you will see an idyllic forest like setting, cut out of the landscape and transferred into the window box. The sound of birds whistling vibrates through the glass and projects out onto the pavement, interspersed with a badger and a human voice; a conversation between the three.

Inside the Gallery is Intercom, upon first sight a minimal exhibition of an ancient looking intercom system salvaged from a disused potteries factory in Stoke on Trent. But after time you discover that the intercom system is still working, with regular announcements being made in a thick Stoke accent ‘Can security please go to the entrance, security to the entrance.’ For the private view the speaker was a live performance by Janet Jenkins from the Wedgwood factory in Stoke on Trent; her accent bursting through the speakers at intervals and reducing the viewers to a hushed silence. Throughout the remaining three weeks the sound will continue to play, with the addition of live speakers throughout the day.

The private view brought many new and familiar faces to the gallery space, a lasting congregation considering that there was not a lot to see in the space. But all listened intently to the announcements and waited eagerly for the artist to appear. The gallery held a great atmosphere and the debut of the new laminated gallery floor was met with much approval.

The exhibition continues until the 1st November 2008 and Johanna will be delivering an artist’s talk on the 25th October at 3pm in the Gallery, all are welcome.