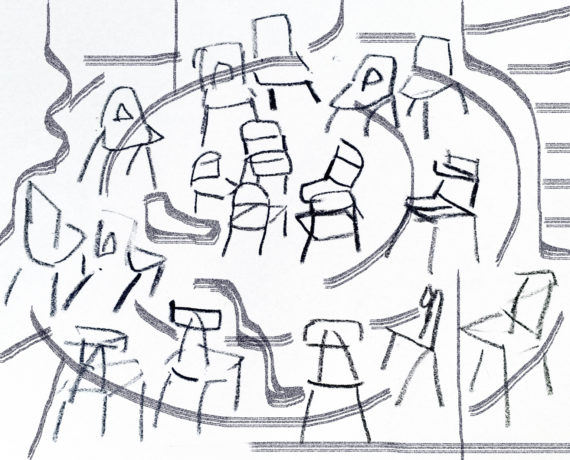 The Artist Working Group is an experiment in how external factors and structures influence the nature of a group. It is a case study and should become a supportive structure for a group of artists. The group started in December 2017, and meet in unfixed locations around shared meals.

Having moved from Nottingham to London in October 2017, where a culture of artist-led activity was very present, I wanted to see if it was possible to work without a studio, and yet be in dialogue with artist-peers, establishing a sense of community, a sharing of practices as well as parts of our lives and daily routines such as meals. Having worked from artist-studios One Thoresby Street for 5 years, I also realised I had a significantly different relationship to the traditional model of a studio from many of my peers who were making work around me. Works I was making materialised outside of the studio, in accordance to my living environment, to public spaces and to architectures I was in temporary contact with, on residencies for example.

I wanted to try and bring together my interest in a number of models I had read about, MFK’s Manual ‘Do the right thing: A Manual from MFK’ in particular, and an interest in notions of community; how a community functions, thinking particularly about the relationship between architecture, voice and improvisation.

The idea to meet as AWG in one another’s kitchens, in galleries offered to us, in hired multi-purpose spaces, in public parks, in private spaces, to share the experience of occupying these locations temporarily, whilst sharing food and practices.

This was the open question that I put in an email following our first meeting with the Artist Working Group. It’s a question that has come in and out of my awareness since. I continue in the email to say that this question is only relevant to ask, once we have a better grasp of one another’s practices.

From the perspective of a long-standing spiritual community, founded in 1962 on the Northeast of Scotland, Carol Riddell suggests that:

“If we don’t know how the others are feeling, how can we work with real rapport?” (‘The Findhorn Community’, Findhorn Press, 1990).

In the email, I also re-cap some points brought up in the first meeting, one of which was the importance of ‘ambiguity’. My interpretation of this, is that the above question can be held lightly and even deliberately forgotten at times. Ambiguity, or inexactness may allow for something between the individuals to manifest, that one individual could not bring alone, or bring about through force.

So knowing how we are feeling, knowing one another’s practices needs to come into our awareness. But it may also go out of awareness in order for the social aspect of the group to emerge in an undeterminable way.

Images courtesy of the artist and Samuel Mercer.

The Artist Working Group went to Whitstable Biennial as an expanded meeting of sorts. This idea of leaving London, going on tour and seeing other artists’ work, to me suggested gaining a perspective on what the group was, where it met, and where our practices intersected.

It was also an interesting way of seeing how the group functions without necessarily physically staying together; splitting up as a means of seeing different performances; following our different needs, meeting others; swimming; reconvening.

As part of the festival, we share Hannah Lees lunch menu ‘ The Trees That Yield’ in an attempt to ingest another artists’ interest in community and food. Did the meal bring us together, if we were already a group when we sat down? The experience of eating food neither of us had prepared perhaps levelled the dynamics. There was no host amongst us, the host was the cafe itself with food prepared by unseen bodies behind the scenes. We were not quite guests, as being a guest implies you eat alongside the host, and so we could talk about the experience and the food with some distance. The meal was our main point of discussion, and the dividing up of small quantities of intricately prepared food was something that took a level of sensitivity from all of us sharing it.

We grappled with Lees’ choice of seemingly non-recyclable pots to serve the food in, and what would happen to the heavily beetroot-stained wooden plates after they had been taken away. It seemed in this way, that the act of eating was a one-off event involving each individual or group. The impact of us as a group is evidenced in various ways. 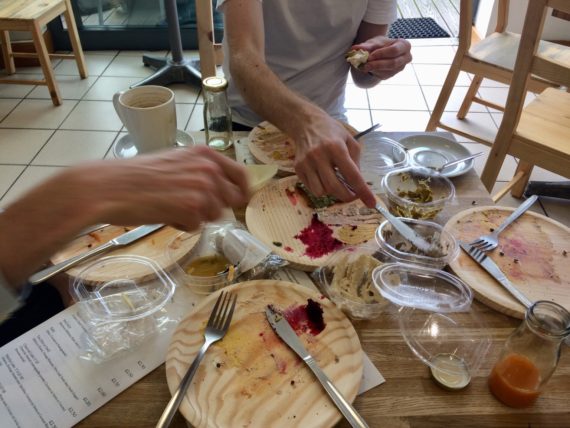 The AWG eating at Hannah Lees’ ‘The Trees that Yield’, Horsebridge Café. Image courtesy of the artist. 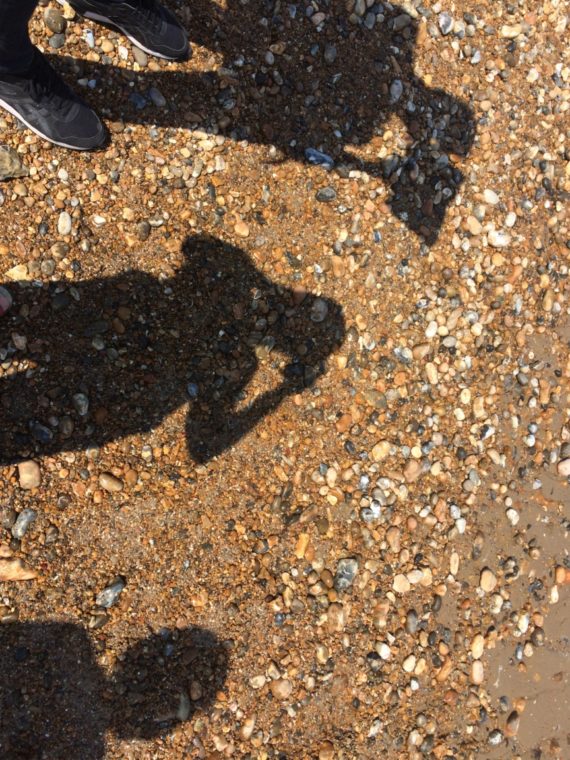 The AWG performing in Bernice Donszelmann, Lucy Gunning and Helen Robertson’s ‘[these roarers]’. Image courtesy of the artist.

In Whitstable, empty oyster shells seem to line the paths by the port and fill in the gaps between buildings. Empty oyster shells for cement, for nutrients, for jewellery? The various uses for empty oyster shells, evidenced in the town and on flyers that read ‘Make Oyster Jewellery’ were clues to an ongoing improvisation that is happening with the the existing waste materials and the liminal spaces of the town. 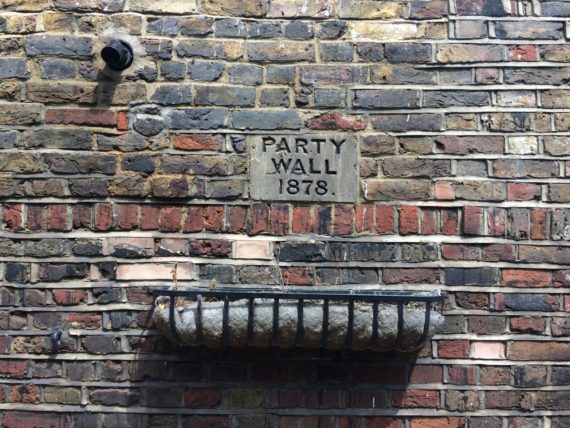 I think we need to go back and make better use of ‘The Party Wall’ however. 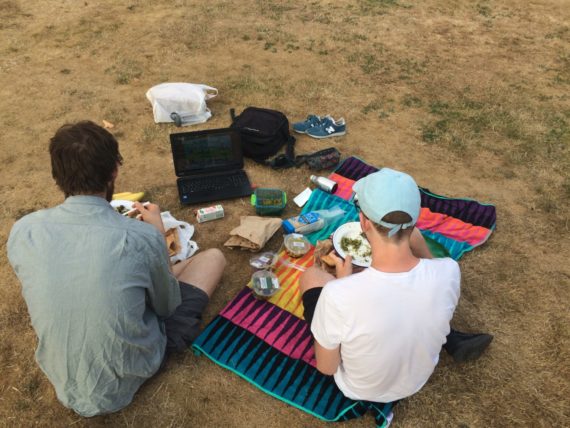 We knew the Lido would be closed by the time we met, but perhaps meeting in a place that has another purpose feels more comfortable? It also plants a seed, of a meeting in water next time?

Two of us arrive first. We sit on a bench within the Lido cafe that is still open for business, but from which we buy nothing. The third person arrives. There is a moment when the idea of our self-organised plan, of eating a picnic dinner, and having the meeting on grass, is subsumed in my mind by the superiority of the bench and the cafe food in my head.

But I manage to refrain from being lured in through a few verbal negotiations around who brought what already, and a general consensus around sticking to our original intentions is made.

We sit in a fenced off area of the park. We are the only three people in there, and appear to be in a spot that is not mean’t for bodies but for the grass only. The boundaries of the park, make us into performing bodies on a grass stage – apt to the interests I had when starting the AWG.

It turns out that having a meeting around large quantities of ants is a good challenge, and requires more attention and focus on what is being said. When the environment demands more from you, even as subtle as insects en mass, or passing publics looking over, you hang on the words of those with you, on the things you can control. But also the meeting must somehow accommodate these environmental factors. It cannot be without them. It must be let into the process of the meeting somehow. It is the meeting.

For this meeting, the first to follow the new format, Michael Whitby presents a series of computer drawings, shown to us on his laptop. Using laptops in parks also works ok it seems, but served more as an aid for talking than the primary focus. It also validated the meeting somehow for me (and others watching?). It kept it in line with the image of what a meeting should look like. We have a laptop. We. are. working.

At the end of the meeting, having cleared the picnic away and continuing to speak, we stand upright in a triangle formation. Each person equidistant to one another, we form a small space in the middle that would not have existed without our three bodies surrounding it. But the meeting had technically ended. So this conversation was in addition but seemed a suitable way to occupy the space together. A way of beginning the next meeting perhaps. 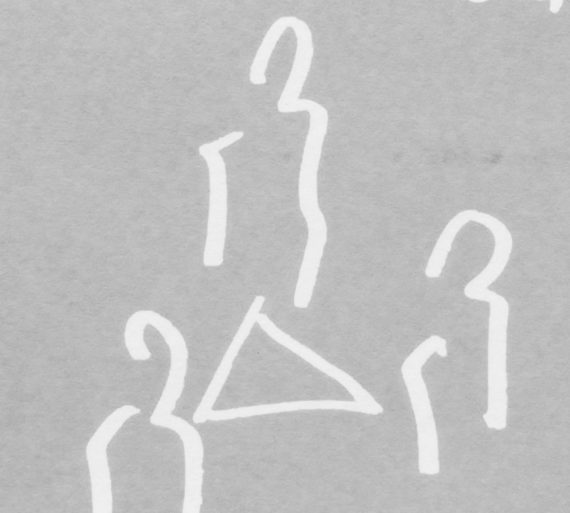 Is there something flawed about me writing on my own? When do I use the words I and we? When do I say they as if it’s their experience I am able to talk about?

But it seems that even in groups, it is flawed to think of experience as shared, and space as shared in the same way by each individual body.

If each experience is subjective, and each space manifests according to our physical and psychological experiences, then in some ways, one voice cannot be contradicted, but just brought up against the voice of another. I is OK, even if others are present.

I initially considered asking if the rest of the Artist Working Group wanted to contribute to these blogs. And then recognised this as my slightly awkward relationship to the role of facilitator, and that it may come as some relief to the others that I am taking responsibility for this. 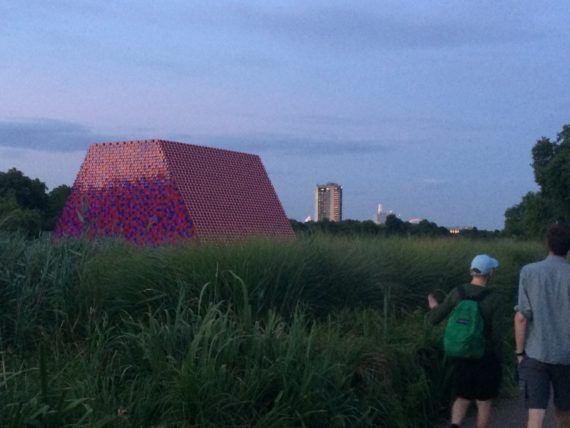 Christo and Jeanne-Claude’s ‘The London Mastaba’, 2016-18 Image courtesy of the artist.

In July 2018 the Artist Working Group met on the grass in Hyde Park, next to the serpentine Lido.

For quite a lot of the meeting we talked about Christo and Jeanne-Claude’s ‘The London Mastaba’. It was an anchor point, something we kept coming back to when we were mid-way through eating, or we lost our train of thought.

Because you can’t not talk about it. It is an abrupt stopping point in the landscape that has to be addressed. What would have normally been an open space between the lake and the park on the other side is now a three-dimensional volume. It demands consideration of how it sits in conjunction with it’s environment. It also implies architectural function; a temporary, interior space that although cannot be seen, can be imagined.

In the mindset of our meeting; that park-is-meeting place-is-eating place, the sculpture had further potential.

The inner volume of The London Mastaba-as-night club for Lido swimmers? Named ‘The Diving Club’ perhaps, with a water-themed playlist that included?

If you inadvertently create a physical space in the act of making public sculpture, are you responsible for considering its potential?  – As agreed following their 2017 Turbine Hall Commission, Superflex’s  ‘One Two Three Swing!’ has an afterlife, and remains a fixture in the nearby landscape now outside Tate Modern, spilling into the Bankside area.

For Serpentine Gallery, the yearly commissioned pavilions are in many ways one manifestation of sculpture-as-architecture-as meeting place, existing for bodies to occupy in various pre-destined and improvised ways. Although not the intention of Christo and Jeanne-Claude, it’s hard not to think about this object as floating architecture (and in the context of Serpentine, Floating Pavilion).

It’s true that the change of light alters the surface of The London Mastaba. As the sun set during the meeting, the sculpture illuminated itself and it continued to be visible, more so even, as we left.

Alice Gale-Feeny (b. 1989) is an artist and writer whose practice spans performance, video, writing and facilitation. www.alicegale-feeny.com