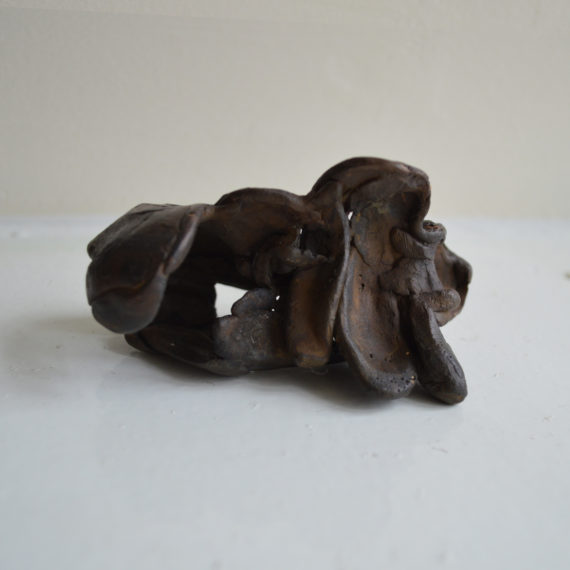 A medieval tradition of repelling witches and casting out evil from homes was to carve ‘apotropaic’ markings into the infrastructure of the home. Witches were thought to be able to enter through hearths and doorways, and once inside a house would hide in dark shadows. Once a witch was inside a home it was thought that they would bring harm to the inhabitants and steal their possessions. Due to superstition, thousands of houses in the UK have been found with this medieval graffiti littering the walls, chimney breasts and areas where valuable items were stored. These apotropes were symbols that often took the forms of  letters such as A, M and V, relating to the virgin mary, crosses which repelled evil and daisy-like circles called hexafoils that stopped witches in their tracks.

There are many tales suggesting that these markings were also found on the bodies of dead witches. This action of carving into the flesh is really interesting to me. When modelling my wax figures I use my fingers and a variety of tools to push the flesh like wax around, forming my desired shapes, forcing the material to change through my artistic decisions. I feel that these tool markings have become synonymous with the inscribing of witch marks.

The lost wax process of casting involves a wax object to be made, encased in a mould and melted out to reveal a negative cavity of that shape. That cavity is then replaced with hot metal, producing an exact copy of the original wax object. This process therefore captures all of the markings and impressions that I imparted into the wax. In a number of my metal casts, These markings are really prominent and texturous. In some, the casting even shows up my fingerprints where I was handling the wax.

I feel that because of this my interactions with the wax are extremely important. I tend to only produce one cast of each wax figure I model. I find with creating moulds for multiples, I lose my connection and purpose of interaction with the piece. Any multiples ii make don’t have as much life and energy to them as the one off castings do.

The apotropaic marks have their own form of energy. We know that witches didn’t actually exist and that these markings were unnecessary. However,  the energy and dedication it took to inscribe into stone and wood again and again shows how convinced the common people were of the existence of witches; how fearful they were that these superstitions were dangerous and posed a threat of harm to their families.

This piece is the amalgamation of bodily forms, the unholy trinity.

It describes the conjoinment to the devil, the becoming of a gateway.

It distinguishes the damned women, the pythons, those who the devil speaks through.

The sexed temptresses are illustrated with black shiny rubber, the ribs serpents inside of their bellies.

Their limbless forms speak of seduction and the temptation of worldly pleasures.