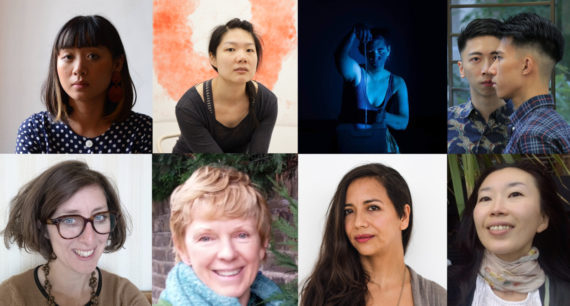 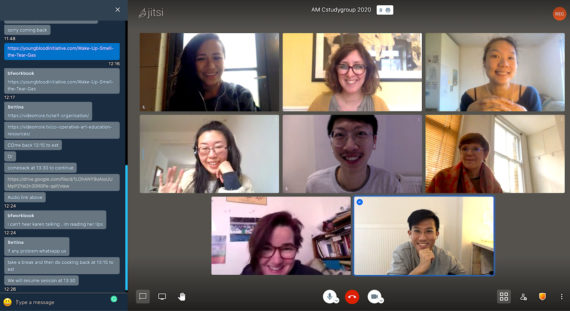 This study group session, led by Bettina Fung and Karen Le Roy Harris, bleeds beyond the hours on my calendar, has me thinking about how we artists/activists organise, how we mobilise ourselves and where do we sit in the greater ecology of the capitalist society.

Each of us in the group got a brown envelope, inside a handwritten letter, a hand drawn shopping list, a reading and another small white envelope, which says. “Please only open on 3rd January 2021 during the session.” We were hinted to be having a guest, an audio-guided cooking activity and a self-conducted exercise later that day. Also definitely the tradition part of a study group: readings.

The evening before the session, I found myself holding my iPad, reading Jo Freeman and Starhawk, while stirring lentils in a pot with cinnamon sticks, peppercorn, garam masala and more spices. These writings are reflections on collaborative groups of activists, manual for self-organised groups, or account of historical events about ecofeminism, the Chipko women for instance.

With a bowl of dumplings with noodles in front of my macbook, I sat ready for the study group to start. Sofia Kosmaoglou “arrived” with her mic not working, and had to do the log-out log-in thing. The group then did a kind of self-introduction that we somehow haven’t done. We talked about our experiences in self-organising: political and environmental activism, alternative education, contact improvisation, artistic events.

We asked a lot of questions with Sofia. One of them stood out so much: “Who gets to be the artist?” The word “artist”, later I realised, can be replaced by many others: “leader”, “star”, “activist” … Or maybe the other way of framing this could be: “Who gets to have a voice?” In a world of perfect structure and system, we get safe space to express our thoughts, be listened to, and have time to listen to other’s. Unfortunately, we aren’t in one. What now then? Especially when you catch yourself holding the mic, contemplating on what you can do and what you should say is then crucial to understand your privileges and responsibilities.

We did a role-play with a nasty scenario where internal conflict in an organisation is hindering its functioning, broken relationship between members. Each of us were assigned a leadership role described in Starhawk’s book: Grace, Dragon, Crow, Spider, or Snake. They each represent a position that one takes to better the group’s functioning, its well-being. Spider watches the group’s communication; Dragon is the group’s guardian and protector. (Okay, it’s a bit more complex than this, but that’s all I have for now.) The magical thing about this practice of having a role for you to speak through, other than being an animal, is: in its most natural way, authorises you to be holding the mic and, at the same time, put you in a position to be hyper-aware of your job.

Reflecting on my own practice, often in collaborative projects I initiated, I attempt to release power, responsibility and authorship to my collaborators. I usually achieve through the means of making sure everyone has the same access to information and resources. This exercise of picking up multiple leadership roles opens up my imagination towards how we define jobs, positions and authority, and how we can reach co-authorship. 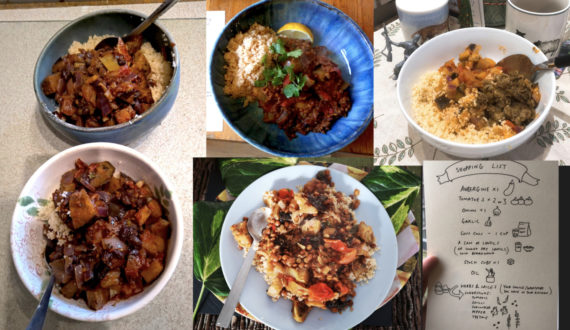 Moving onto the cooking activity, we left our laptops for a bit, and cooked while listening to an audio track where Bettina and Karen instruct us to heat up some oil, chop some vegetables, throw in some spices, and make a vegetable fry dish. As we digitally re-gathered with our cooked dishes laid on our kitchen table, conversations did not then become more shallow or daily, but our tables extended across screens, breaking through boundaries of space and geographical distance, and held us together through the simple act of making a dish and dining together. Intellectually, we all understood that our plates could taste totally different. However, nothing is more real than the fact that: this little self-organised group was here dining together.

The same old question: what makes a community? It has to be more than just people gathering, asking questions, looking into various knowledge bases, creating brave spaces for conversations to happen. How can we move on from talking to doing? How can we truly have “takeaways” from these study groups sessions and make changes in our world, little by little? Looking at the flakes of spices left on my hob, I think I found out a little more after this long session.

A lot more happened. A lot more needs to happen, including a self-conducted postcard drawing, writing and posting activity that we need to complete separately. On our own, but together, in some sense. :)