Apart from the fact that I choked on a glass of water and had a coughing fit, the training day at Dreamland in Margate was great.  A really re-generating and moral boosting kind of day. The sort of day that Animate do so well (there are not enough of these days) where new members of the team are introduced and general project briefing takes place. It is combined with gentle humour, ridicules tasks and games, serious equipment instruction and communal making session  and general team building activities.

Or described another way, a laugh with friends.

The laugh with friends did get out of hand at one point while I choked during a recorded  improvisation sound piece. The idea was to create something using sound with random objects we picked up earlier. Stupidly I chose a half drunk glass of water and a knife with butter smeared over it. Initially I thought to make the glass rim ring with a wet finger, however, I was unable to make it work under pressure during the little jam thing going on. Instead I thought to gargle with the water at the back of my throat in a free form solo which I was going to base on a vocal solo I had heard from a track recorded by the muppets.  I actually blame Jo for the total breakdown of order which followed. Any cricket fans will remember the laughing fit on air by Johnathan Agnew and Brian Johnstone commentating on the 2nd test against the West Indies at Lords in August 1991 listen here, we kind of recreated that radio clip, with all 10 people in the room totally incapable of anything utterly consumed with laughter at my expense.

What happened was that Jo saw me pick up the glass and I think she realised I was going to gargle and started laughing at me just before I started my solo! It didn’t start well as began to laugh at the critical moment of gargling and I managed only few hysterical squeaks as I began choking . I thought I was going to pull out of it and things were going to be Ok, but couldn’t manage it and burst into a coughing fit. Everybody thought this was very funny and utter melt down came next!

Apart from that it went very well and the Pizza evening meal was great as well.

I have signed my contract, completed an invoice, signed the consent forms, read the risk assessment and printed off my insurance cert and DBS. This all ready for Thursday 20th the Artist Training Day in Dreamland.

I did sit down to look through the staff induction pack, didnt get far as the first page had a large photo on the front of an event I remember very well. It might have been the first big Animate event which was basically just a massive party! Lasted a day. It was a party made of cardboard.

It led onto to memories of other cardboard projects which I have taken part in for Animate. I started to think, what exactly have I made with cardboard? The list is very  very long and does wander into the surreal, but I have identified a special top five.

No.5 A Rain Forest. It covered an entire school hall and you could walk amongst the trees with a friend. A teacher said to me I have never seen anything like this in 35 years of teaching!

No4. Signage for an entire festival site, including finger posts and a series of street names.

No.3 The Favela’s. There were hundreds of these, a shanty town with no crime or deprivation. Colourfull collection of tiny dolls houses. I had to install this installation in three different venues. Which was one of those jobs where you need three arms, but managed somehow with only two.

The memories are now beginning to cross that threshold into real special moments.

No.2 A 10m x 10m cardboard model of London with the River Thames running through the middle. Made with 650 members of the public in the centre of the Festival Hall on the South Bank. Things got off to a slow start where it took me half an hour to explain why I really really needed to use chalk on the floor to mark out ….well London. Managers were paged and consultations with rather a lot of staff members, and eventually we got the green light. But it was the sense of working in a team to create an amazing thing that alone would have been impossible. Achievement still glows out of me when I see photos of it. It was stunning. 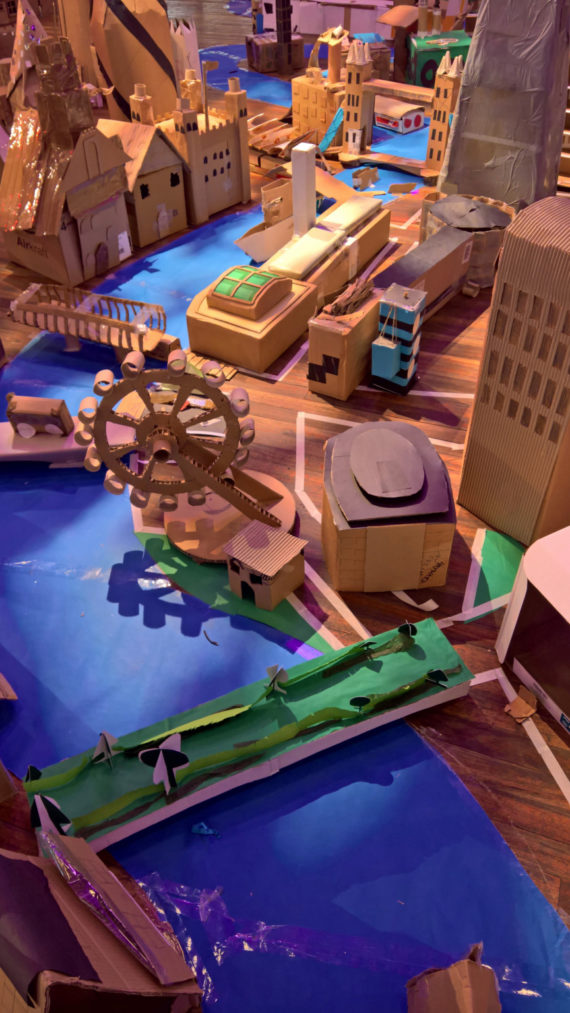 No.1 A cardboard kitchen. The reason it is so powerful is because the chips were down, the sleeves rolled up with more to make than you can ever manage and the batteries running low. However, I spent an afternoon and evening with Jo the Director of Animate at the end of an exhausting week, making a modern domestic kitchen in a timber framed country house, this is cardboard remember we were in a giant cardboard dolls house. We made a cooker, fridge, sink with draining board, taps, cupboards, oven with gas hob. We worked so well together, high fives when the egg rack went in. The fridge had a hinged door that opened with milk trays as well, we were on fire, we had a chequered tiling scheme going on. A microwave with buttons, saucepans, blenders and even electric plugs and sockets. Just one of the best days ever. It was like being a real kitchen fitter on site with at work with his mates. Problem solving sharing knowledge and ideas. Exchanging concepts techniques. We were working on a building site. Just that it was cardboard.

Art Builders: does what it says on the tin. 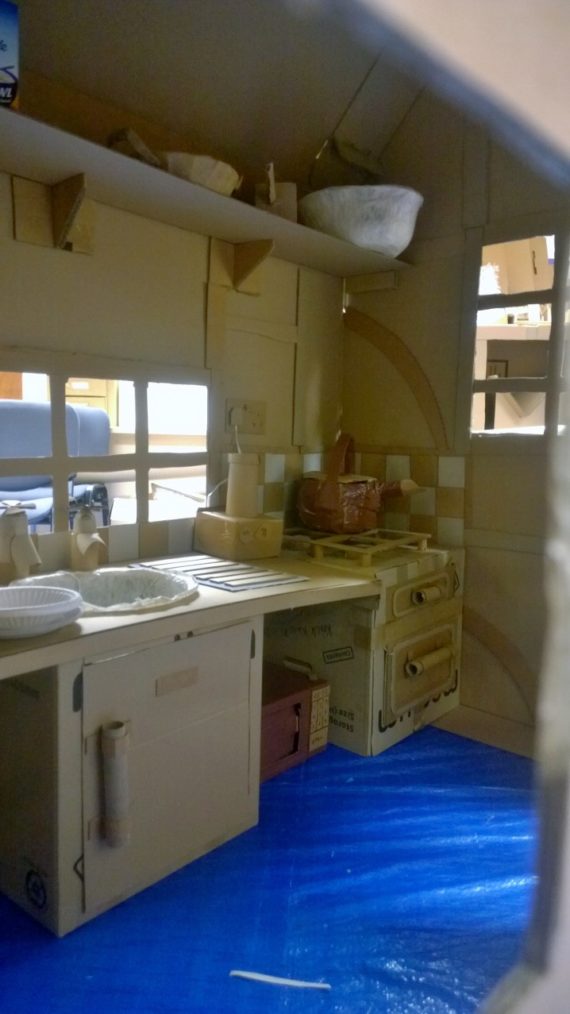 There is always cardboard in my workshop and that’s because I am an artist who often works for Animate Arts Company. 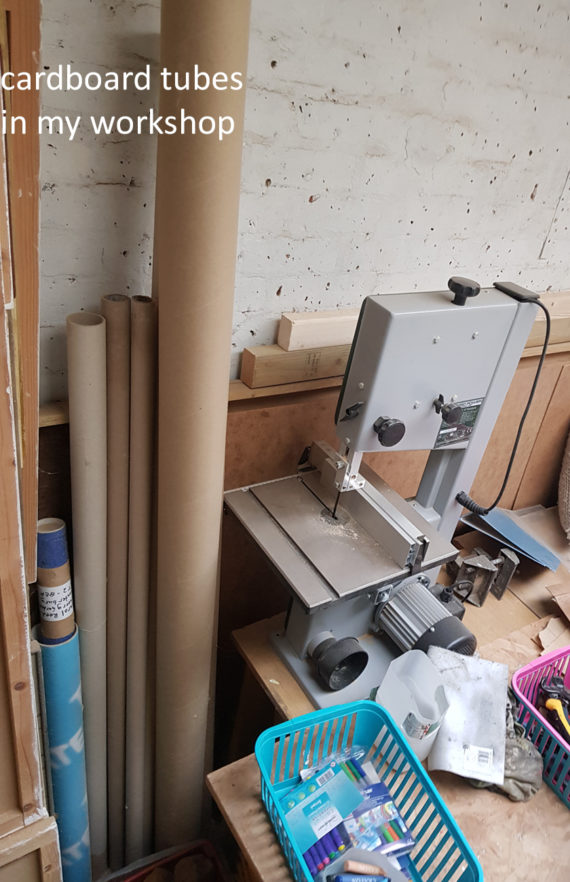 Standing upright in the corner making it a little bit difficult to reach the light switches are all the cardboard tubes I collect. You find these inside rolls of carpet, smaller versions found inside rolls of material. I slide the smaller ones inside the larger ones and the poster tubes inside those. I usually have a dozen or so which regularly fall over when looking for something else. Fred the Irish terrier knocks them over if he can reach them, he enjoys playing with them. I also keep small little boxes you get for house hold products, typical examples are tea bags, Ibuprofen, scotch porridge oats and crackers for cheese. I have a valuable stash of till roll boxes which are earmarked for something else, and I carefully flatten and keep these as I know they will be invaluable on the day.

I have an Artist Training day at Dreamland in Margate with the other Art Builders Team. A paid training day in Dreamland. I’ve also just been sent the breakfast menu if I want to order breakfast and an invitation for dinner at the GB Pizza Co (best pizza on the planet) afterwards. I love Animate they do things so well. 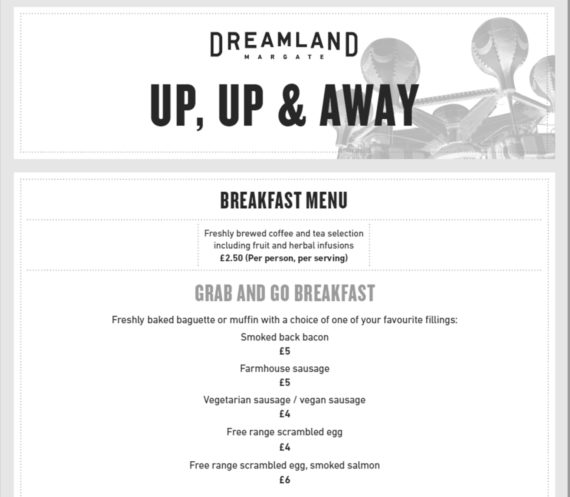 Imagine actually being a school pupil off to Dreamland for the day to build a massive cardboard …er…. SPOILER ALERT …………not sure I am supposed to say!