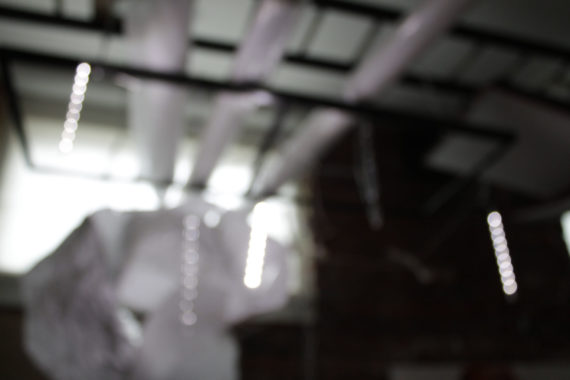 As an artist having used glass as a main material for about 10 years, I’ve been collaborating extensively with a digital artist for the past three years. Those projects re-ignited my interest in programming and introduced me to the creative possibilities of Pure Data / Max MSP. The reason for selecting this specific programming language is that it is developed with sound, video and light in mind; elements that are already part of my current work. It is also extremely suited to interactive programming.

The A-N magazine Artist Bursary 2018 offered me the chance to explore and expand my technical skill in Max MSP programming with well grounded teaching; to find my own voice in using technology in combination with my glass work. The aim of the project is to have a working stable prototype by the end of the year.

Max MSP is a visual programming language geared towards manipulating sound and visuals. Taking in audio, video and other externals such as sensors and program them to respond through those externals.

I’ve expanded on my choice for MaxMSP here, following a conversation at Hackspace Leeds on this topic, because there are a multitude of options when you want to explore what I’m trying to do. The world of programming is very diverse and there’s no one answer to anything. I’ve decided to use a language that I’ve had some experience with already, that I knew would be up to the task and that I felt an affinity with. In the future I might expand to other programming languages, if after having worked with it intensively I find it no longer fulfills my needs. It’s as much a personal exploration as a structured way of learning new skills, no running before you can walk.

A short word on blogging. Writing about my work doesn’t come naturally to me, so I’ve made many a draft up to this point. Questions on what makes an interesting blog, what parts are interesting to share, how detailed do I make the content all play a part. I’m sure I will get it a bit wrong at times, so if you’d like to know more about a certain aspect then ask the question and I’ll give you as much as I can. As you can see I’m a visual artist first and foremost, images will have a much more up to date state of where I’m at.

The process of developing this kind of work isn’t linear, there are various strands that can be developed simultaneously, the glass objects should be developed along side getting the hardware to function as limitations of both can influence design decisions you make along  the way. Lots of time goes into developing new skills, such as soldering electronics, researching/testing/discarding sensors and other externals, making power connections that are safe and suitable . Which means reaching out to people with specialist knowledge, so when stuck in one area, I continue on another until I’ve solved the problem. For that reason I will post whatever part it is I’m working on.

After the joy of having been awarded the bursary, (temporary) disappointment came fairly quickly. The course I planned to take, Max Visual programming for artists and designers at London College of Communication, was postponed to July and there were early signs the same might happen again. I was worried my fairly flexible schedule was to be delayed beyond the point of making my goals for Dec achievable. I reached out to a programmer friend who put me in touch with the Yorkshire Sound Women Network, which eventually led to arranging one to one classes with James Bradbury, Phd researcher at Huddersfield University (extensive experience in Max and teaching). We discussed teaching plans and after getting the go-ahead from AN-magazine, It turned out to be a blessing in disguise, double the amount of teaching time, closer to home, on a one to one basis.

I set myself the project of developing a prototype that is stable and functioning, with the idea that in future it can be used in multiples to develop various installations in collaboration with other artists. The prototype has five suspended glass elements combined with the use of ultrasonic sensors and Kinect to detect movement in a space and respond with various behaviours. The idea is that these behaviours can be tailored/completely changed in response to different spaces, briefs and intentions of use. I guess I’m expanding my core materials for developing work from the physical and liquid side of glass to the immaterial world of electric connections, zero’s and one’s.