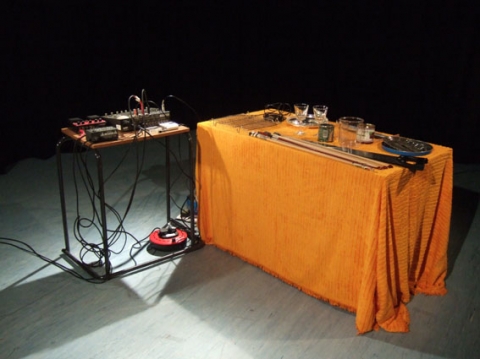 This is a six-week placement where the emphasis is equally on student and artist development. I will be giving a few workshops and performances, but also produce a body of work which specifically explores the acoustics of the college site.

Today is my last day on the residency. Of course there will be the editing and compiling of audio and video clips to hand in, but generally that's it. It's a pity, because today was brilliant. Two students came over to my hut and we worked on a recording for 4 hours. We made samples of various things (pins, glass, broken guitar fret, saw etc) and looped parts to form a short arrangement. It's really good. They've called it 'Funk It'! I hope they'll keep making sound work. I've left a big pile of contact mics for the students to use if they want to.

Over and out, I guess.

The performance went very well I think. I haven't listened back to the recording yet, but I know there were some very subtle bits, particularly the section where we used field recordings. I had four students who had each gone out and recorded long continuous sounds (traffic, running water, street murmer, and a gurgling radiator), and they all fed into each other beautifully. There were of course moments where some of the other students were making the performers laugh, but everyone gave it a good shot, and I know they haven't done this kind of thing before. It was exciting doing the mixing and looping live; I had to be very aware that my loop was fed back into the mixer and could potentially start recording and overdubbing itself (and get very loud very quickly). A lot to think about whilst also trying to direct the groups…

It has been hugely worthwhile, not least for the experience of creating work with 30 other performers.

The last two days I have been checking the equipment for the performance on Thursday. I’ve borrowed a mixer that will allow 8 students to play at once and for me to feed my loop pedal into the final mix. It will allow a lot more control from my end, which is important when using contact mics, because they tend to be indiscriminate about volume levels. I did a practise loop with purely surface sounds, and I think we should be able to sustain a long and varied performance. It all depends on what objects the students bring. I’ve got a few spare because I know there will be some who ‘forgot’. I would prefer to use their objects and input, because otherwise it may sound like just another one of my performances. We’ll see…

I finished the speaker today, with a strip of old cork tile around the edge, much like a 70s synth! I filmed a short demonstration of the differences caused by the various glasses; it also looks a bit 70s, in a ‘Look Around You’ kind of way. I think I mentioned this at the start of my residency: that it seems to be the way my performances (and documentation) are going. The retro ‘science-for-schools’ look. Maybe I should just embrace it and start to dress the part too. It’s not so much for referencing nostalgia (which is too easy and superficial), but more referencing the kind of programme that turned science experiments into performed demonstrations. The attempt, perhaps, to make physics glamorous… I think this appeals to me because I am teaching myself how these fundamental electronics and physics experiments work; I am still learning, I like learning, and I want my art practice to demonstrate this. I want to show everyone who sees or hears my work that they can do it all too; that everything’s been learnt through experiment. When I play objects I want them to sound like the aural equivalent of a microscope revealing the ‘true nature’ of the thing. 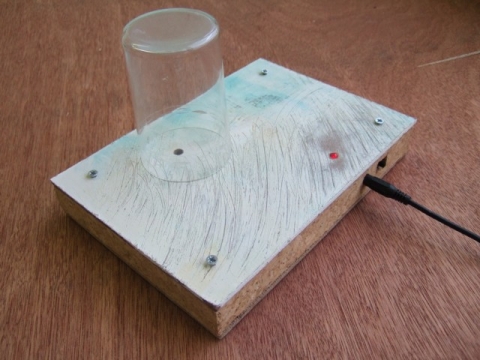 Today I decided to make a housing for the speaker and amplifier I made yesterday. I wanted to play around with the aesthetics, and make something out of bits of old wood I found in the studio. I like the idea that what I make does the same job (more or less loudly!) as my mini Marshal amp, but looks completely odd. An unbranded, unrecognisable means of broadcasting sound. In the end I came up with a flat panel 21x15cm, and 3cm deep (like a book). It has a small hole on the top surface for the LED and another above the speaker. When I played a recording through it I discovered that I could place different-sized, up-ended tins and glasses over the hole to subtly filter different frequencies. The action was a little like moving a glass over a Ouija board in a Victorian séance. A far cry from my chubby little Marshall…