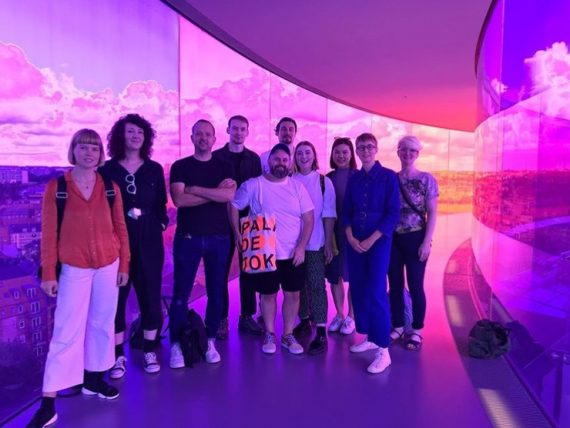 Now that I have had some time between the delegation and putting this blog together, I feel I’m ready to share and reflect on the trip. We were given 5 full days on the itinerary in between travelling. I will write posts for each of the days, or if there is quite a bit about a specific place, I will create more than one post for that day. Each place we visited, I will add images, text from their website with links to it and any notes / thoughts of my own from the visit.

A bit about Off Licence – Cash only (from their website)
On August 28, Off License – Cash Only, an installation and sculpture supermarket by Frederik Nystrup-Larsen & Oliver Sundqvist in collaboration with V1 Gallery, will open in Copenhagen on Møntergade 3C, consisting of a pop-up storefront that displays and sells sculptures named after the everyday objects that inspire them.

In the store, the sculptures will be sold at the current market price of the object they’re named after – from an avocado to an ancient Greek terracotta wine amphora, circa 350 BC (missing one handle). The customer will be able to bring them home immediately, thus reimagining the process of buying art into an everyday shopping experience. The installation is accompanied by an Instagram-profile @offlicense_cashonly, displaying the sculptures as products from an online store.

Off License – Cash Only will open with fully stocked shelves and will be restocked at regular intervals for the duration of the installation, while stock lasts. 111 sculptures will be presented during the eight opening days. Sculptures cannot be pre-ordered and are sold on a first come, first served basis. All the sculptures presented are crafted from papier mâché, acrylic paint and lacquer. The works are accompanied by a certificate of authenticity, signed by the artists. Sculpture prices range between €1,3 (avocado, sculpture) and €9.327 (convertible soft-top sports car (2013, 418.429 km), sculpture).

Inspired by Claes Oldenburg’s The Store in New York from 1961 and the off-license liquor stores in London, where the two artists have been living for the past six months, the project springs from a critical approach to overconsumption, bad manufacturing, as well as an irrational fear of online shopping; the feeling of never being completely sure whether what you see is what you get.
With Off License – Cash Only Nystrup-Larsen & Sundqvist essentially seek to challenge the viewer to be more critical of what they see and buy, while investigating the fine line between art and commerce and the way we attribute value to objects of art by experimenting with the relationship between fiction and fact.

Off License – Cash Only is the first edition, additional pop-up stores will follow in other cities around the world.
Frederik Nystrup-Larsen (b. 1992) & Oliver Sundqvist (b. 1991) is a Danish artist duo, both graduated from The Royal Danish Academy of Fine Arts, School of Design (Furniture) in 2017. Nystrup-Larsen currently studies Sculpture at Royal College of Art, London. Embossed by their time, they easily cross boundaries between various media; installations, sculpture, interior design and recycled worn-out objects with flair for treating complex materials with dignity and innovative creativity. Recent exhibitions and installations include How To Build A Blanket Fort, 2019, a large-scale installation and bar, created in collaboration with architects Spacon and X, commissioned by Tuborg for Roskilde Festival, Soft Boxing, 2019, at Eighteen, Copenhagen, Eros Torso, 2018, a collection of one-off vases made of repurposed single-use plastic containers for the flower shop Tableau, Copenhagen, and Mater, 2017, a series of pigmented concrete vases exhibited at the refurbished Noma restaurant in Copenhagen and in the design store Totokaelo in New York.

Nystrup-Larsen & Sundqvist and V1 Gallery would sincerely like to thank Egmont for providing the location Møntergade 3C. Without creative room to play, our city centers will wither away. Thank you to Tuborg for Tuborg.

A bit about V1 Gallery (from their website)
V1 Gallery was founded in 2002 by Jesper Elg and Peter Funch. In 2004 Mikkel Grønnebæk joined the gallery. The gallery represents a select group of emerging and established artists and is committed to introducing art, in all media, to an international audience. Seeing art as a profound and competent media for social and political discourse, the gallery aspires to serve as a platform for art that interacts with the surrounding society. 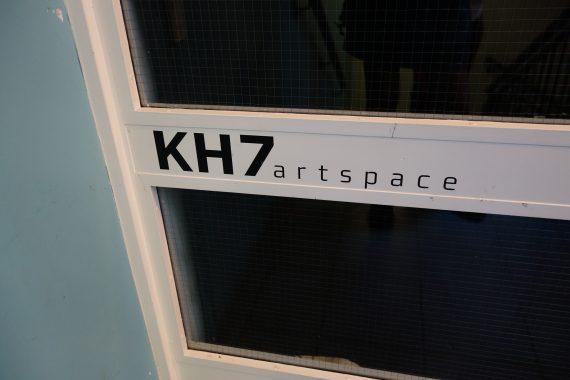 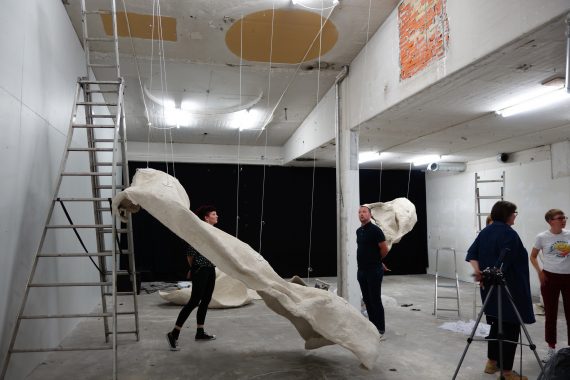 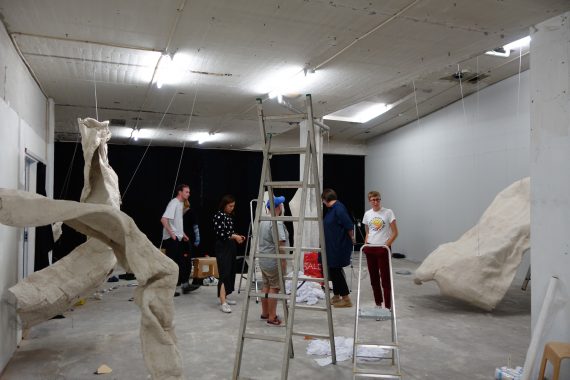 A bit about KH7 Artspace (from their website)
KH7 artspace is an artist community with associated exhibition space at the south harbor in Aarhus. The ambition of the artist-driven exhibition space is a vibrant platform for artistic dialogue and development across generations and genres in Aarhus.

A bit about KH7 Artspace (from my notes)
A really interesting space with studios and exhibition space. This was our last space to visit on the trip and Jette Gejl gave us a warm welcome and intrigued us all. As a group we nicknamed her ‘Beige Lady’ as she collects beige objects, does beige therapy and has beige parties with beige food! 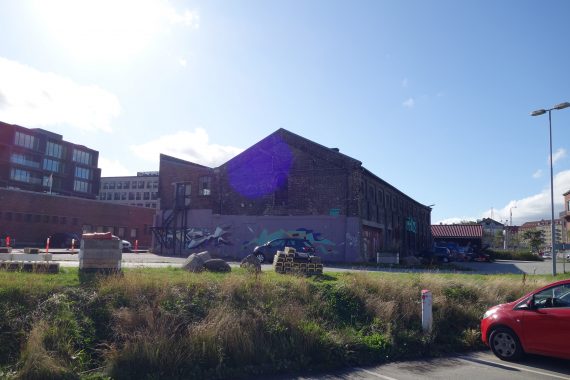 A bit about Spanien 19c (from their website)
The Exhibition SpaceSpanien19c is a nonprofit artist administrated space in Aarhus showing a high quality contemporary art.The space was established 1998, and has 6 – 8 shows a year, presenting both Danish and international artists. Because of its location and interior The Exhibition Space Spanien19C gives an atmosphere, which calls for experimental productions. The place is as such a catalyst for experimenting and space specific art, as well as performance and avant-garde sound and music productions, which has given the possibility to show new and challenging productions before they appear in the established art world. The exhibition space is a challenge, demanding the artist to identify him/herself with the space, to be new and contemporary) which also gives the possibility for experiments that would not happen in other places. With this in mind it is important for the Exhibition Space Spanien19C to work as an intermediary for experimental, space specific art, which cannot necessarily be reproduced and to give this form of art a place to unfold itself. Spanien19C is not only an exhibition space, it is a platform to cultivate new thoughts, a place where subculture and the established art world can meet. It is our goal to give artists possibilities for meeting, to discuss and to exchange thoughts and ideas across the borders of ones particular profession or position and thereby contribute to a vivid and committed art milieu. The place has been working together with similar places and arrangers, and hopes to do even more so in the future.

A bit about Spanien 19c (from my notes)
Brick wall space. They like artists to respond to this. You can send submissions in, they are very open to you contacting them. Area is going to be developed so they will soon have to move out. Feels a bit like Manchester with lots of flat being built and everyone asking who’s going to live in them. The artists keep getting moved around. How can they work with the builder and developers instead of choosing to disappear?

A bit about Galleri Image (from their website)
Galleri Image was founded in 1977 as the first public gallery for photography in Scandinavia, and for many years, was the only one of its kind in Denmark. Since then, we have gained an international reputation for our exhibitions and have contributed significantly to the recognition of photography as an independent art form.

Galleri Image is a member of the Nordic Photography Network along with our sister organisations in Iceland, Finland, Norway and Sweden. You can read more about it here.

Since 2013, Galleri Image have organised and conducted the annual Photobook Week Aarhus in collaboration with the Aarhus School of Architecture. The programme represents an ongoing investigation on the development and role of the photobook as an artistic media, it is curated by international experts under the direction of independent curator Moritz Neumüller. Visit the website here.

In 2014, Galleri Image became a member of The Danish Association of Art Centres. The association was established in 1992 and consists of 18 public art institutions today. Visit the website here.

Since 2016, Galleri Image has held Fotobiennalen in collaboration with Brandts and the Centre of Photography. For more information click here.

October 2017 marked the culmination of the project FRESH EYES – International Artists Rethink Aarhus, a collaboration between Galleri Image and the Aarhus Centre for Literature. The project was initiated in 2013 and during this period, eleven international photographers and seven writers were invited to Aarhus. Here they experienced the city and had dialogues with the local population. Their artistic visions of how to rethink Aarhus was presented in an exhibition at Galleri Image, through photo, audio, and video installations in the urban spaces of Aarhus as well as through readings, workshops, and seminars at Godsbanen.

We are also part of PARALLEL: European Photo Based Platform, supported by the European Commission through Creative Europe’s Creative Program. PARALLEL consists of a network of 20 European cultural institutions and festivals with Portuguese Procur.arte. The project was partially established to strengthen cooperation in the European photo art world. See the website here.

A bit about Galleri Image (from my notes)
Really lovely gallery, basement level so no windows. 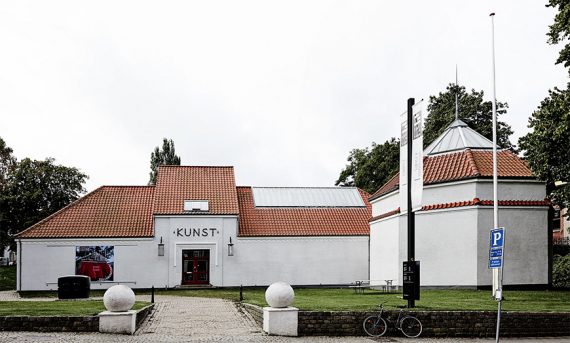 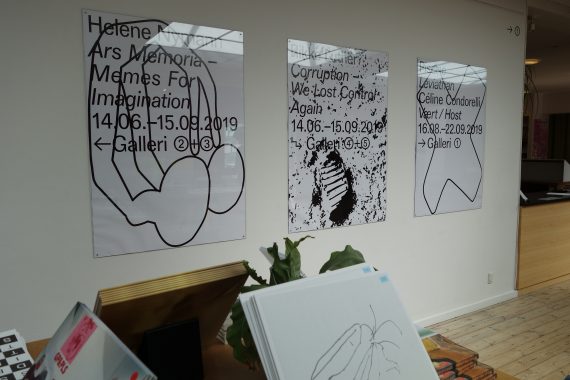 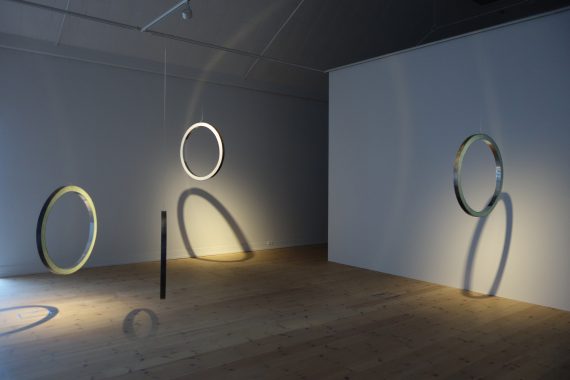 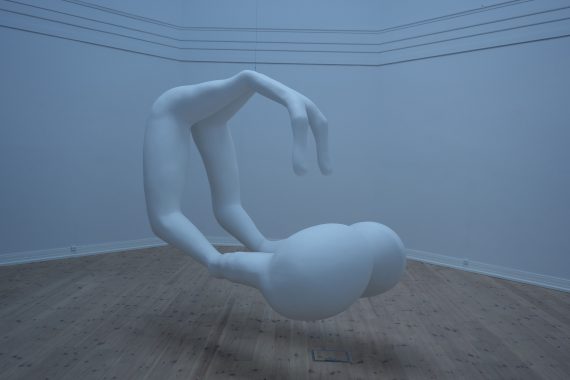 A bit about Kunsthal Aarhus (from their website)
Kunsthal Aarhus is a contemporary art centre located at the centre of the city of Aarhus, Denmark. The institution initiates, commissions, produces and presents art at an international level to local, regional, and international audiences. Kunsthal Aarhus creates art in a broad context, connected to other fields of human activity, other disciplines, and to a wider society as part of a sustainable approach.

It provides a research based participatory, collaborative and transdisciplinary platform for artistic experimentation and critical engagement. Kunsthal Aarhus strives to be an inclusive, transparent, dynamic and flexible institution that fosters the culture of appreciation and values diversity of contributions.

History
Kunsthal Aarhus was established in 1917 on the initiative of Aarhus Art Association of 1847, and it remains the only Kunsthal in Aarhus and one of the oldest in Denmark and Europe.

With its founding mission to “inspire and promote a general knowledge of the fine arts,“ it was received with great enthusiasm by the public and has since played a central role in developing and presenting international contemporary art in Denmark.

A bit about Kunsthal Aarhus (from my notes)
The venue is beautiful and they also have a sculpture park outside. They like to look at whats’ new and relevant. There’s a small cafe and shop selling mostly books. The room with the hanging sculpture shown above is really lovely, its circular and bright.

During our visit to Kunsthal Aarhus we were taken on a tour around Aarhus of artworks that were set into different venues organised and curated by Mark Tholander of Piscine. 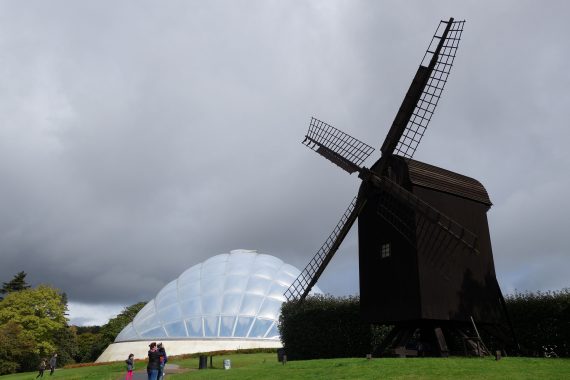 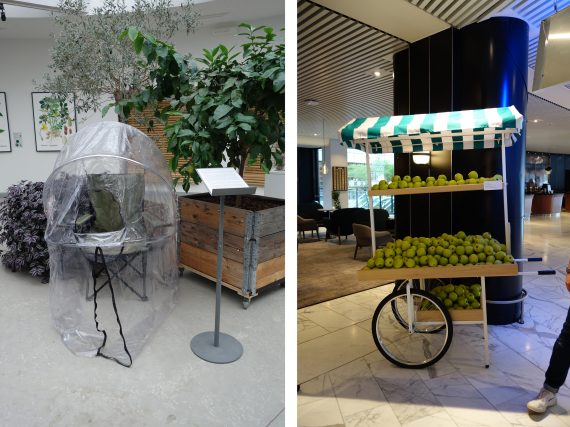 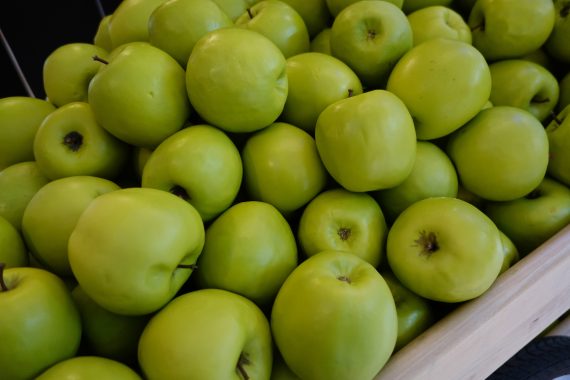 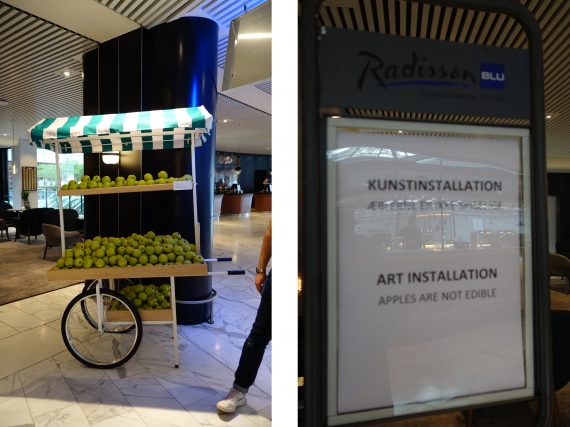