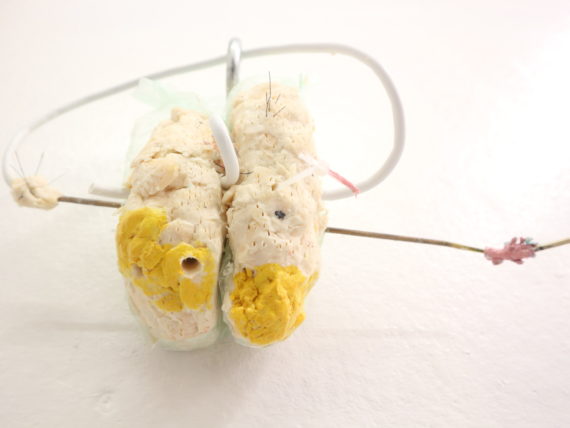 The beginnings of my research have coincided with my involvement in a project by artist Sean Burn who is currently carrying out a project with/at The Art House in Wakefield. His day of talks, performance, group visits and sharing materials and research was titled The Unreliable Narrator Tour as part of his ongoing project “reclaiming the language of lunacy”.

This has turned out to be important as a starting point for a variety of reasons- the first being the idea of narrative- who’s stories are told and how? I want to delve outwards from work on my own lived experience of mental health to explore the experience of others and systems that surround it. My main concern research wise is how oppression of minority groups and systematic control of groups of people impacts on mental health of individuals and also collectively. I am also interested in how certain ‘unusual’ or ‘obsessive’ behaviours are classed as acts of insanity in particular the history of women, the diagnosis of hysteria and the white male dominated field of psychiatry and it’s classifications. How behaviours that are ‘normal’ for one group can be unknowingly and/or purposefully misunderstood and misdiagnosed by those of another group and how this influences our systems of health and care. As part of this I would like to explore different models of disability- and the relationship between mental health and disability without looking first and foremost at the dominant views of the powerful and privileged.

So – The Unreliable Narrator Tour by Sean Burn to The West Riding Pauper Lunatic Asylum and then the Mental Health Museum Wakefield was the perfect opportunity for an a starting point of lived experience, asking questions, ownership and contribution to our own mental health stories. To broach mental health and disability and its relationship to being an artist and as creative resistance to dominant oppressive structures. Sean proposes an opposition, an alternative, the nerve to ask a question or act out. To live a genuine and feeling existence openly shared with others honestly on topics that are of shared profound human experience and to not distinguish between that and art is often ‘too much’ for the ablist and elitist contemporary visual arts world who picks and chooses which outsiders and brought inside. Sean describes this as FRICTION. Some people’s very existence causes friction- Sean is one of those people, he is my kind of people.

Moving on to the day itself…

The Mental Health Museum Wakefield was refreshingly exciting and not what I was expecting- it is much more than it’s collection of objects (which are interesting in themselves) but they are not the whole story. The people are the story – and this is what makes them on the side of the person and not on the side of authority/money/impersonal system. Sean describes it as PEOPLE and FRICTION (please do note Sean would not approve of capital letters and only writes in lower case).

MHMWakefield have a manifesto that starts with:

Together we can change the world
Access to real, powerful and tangible human experiences inspires change; from the privately personal, to a collective revolution. Our extraordinary collection aims to support the empowerment of people: joining people together to combat mental health stigma and prejudice. Together we can co-create a mindful, knowledgeable and active society.

I wasn’t expecting such a loud and clear voice- I wasn’t expecting to hear about the radical, the personal and I didn’t expect to hear about the curator Cara Sutherland’s history with activism and ideas on change and the law. It was Cara’s voice that made the place seem full of possibility- Sean’s excitement to introduce us to Cara’s ideas was palpable. It made me consider the relationship between the museum, the person with lived mental health experience and the artist (the latter two possibly being the same thing). Artworks were involved heavily in the collection including new responses to original Pauper Lunatic Asylum patients such as Mary Frances Heaton who created intricate stitched text pieces similar to small banners or tapestries. Mary’s notes showed a doctor’s opinion on her work and described it as an obsessive and unhealthy activity rather than a positive expression.

The collection itself focused me on themes of control and freedom. The section of the collection focussed on garments- heavy fabrics and metal restraints described to move from mechanical restraint to chemical restraint. The clothing made me consider more my relationship with fabrics in my own work- having already worked with what I call bodily materials- heavy leatherette, heavy grey cloth and rubber. It also made me reflect on my use of metals and mechanical sounds and why I had been drawn to them. Sean spoke to me about my sound making- he seemed interested in a live piece I did that was featured by The Wire titled Point Attachment. My work with sound and assemblage is all about connections and lost connections- improvised falling aparts and momentary balance and coming together. Which is my experience of clinical depression and generalised anxiety disorder. One moment- everything- next, nothing. My combination of what I consider bodily/human and non human i.e metal or plastic objects mirrors feelings of disassociation- something cold cutting across life. Brutal sounds and discord amplifies what it feels like to feel unsafe in your own mind and body. We spoke about how a palette of sounds and improvisation is a language- a non verbal language. I explained for me by using objects not meant for sound making I disengaged or subverted any assumed history or assumed use- that my language was to reliant on my own connections and not ones prescribed to me. This connection / disconnection also applies to my assemblage work- the physical connection otherwise invisible.

Themes of control and Freedom were apparent with the exhibition of uniforms, keys, clocks and brutal restraint apparatus- with description of movement between mental health going from a criminal to a moral problem. Lunacy was seen as a criminal act and the ill treated as inmates- in the 1700’s there was a shift to lunacy as a moral illness with ‘moral treatments’. Work routines replaced more harsh and abusive treatments. There were many debates within asylums about the use and misuse of mechanical restraint.

On a personal note the collection of mental health related objects made me think about medication as someone who has taken medication for mental health for a considerable amount of time. An underlying fear of using medication is that it can be said to numb or dumb down a person. Could using a medication to treat mental health also be seen as personal restraint? Medication and therapy was talked about within the group by many- openly- which is something I have never experienced. Some of the group with distressing lived experience of some parts of the collection from psychiatric hospitals were emotional and some were distressed- we supported each other to talk through different things we were experiencing. For many it gave us a way to connect with our own experience but also the experience of others.

Sean left us with many things to consider including different poems and printed artworks including this poem What is Madness? by Kurt Schwitters:

Point Attachment by Rosanne Robertson featured by The Wire

I would like to thank A-N The Artist Information Company for their support of this project.

Rosanne Robertson was born in Sunderland in 1984 and is currently based in West Cornwall. Their practice spans across sculpture, photography, drawing and performance to explore the boundaries of the human body and its environment. Robertson's body of work titled Stone (Butch) was exhibited as a contemporary intervention within the display of work by Barbara Hepworth at The Hepworth Wakefield and in group exhibition Associated Matter at Yorkshire Sculpture Park as part of Yorkshire Sculpture International 2019. Their public sculpture We Built Ships (2020) has been commissioned by Sunderland Council and Soroptimist International Sunderland as a legacy to the 700 women who worked in Sunderland's shipyards. Their work has been included in reviews and articles in Elephant, Wallpaper, Art Monthly and The Financial Times. During 2019-20 Robertson has been a short-let studio holder at Porthmeor Studios, St Ives continuing works that explore the Queer body in the natural landscape. Robertson has a text included in the 'Breaking the Mould publication by Arts Council Collection published by Hayward Publishing.