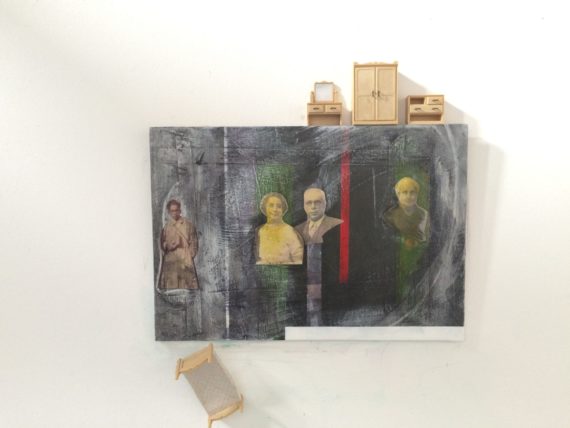 I have been away on an absorbing project about a British antifascist artist called Felicia Browne who fought in the Spanish Civil War.

But now the ghosts in the studio are stirring and I’m back to the origins of my work, back to the heart of my practice; my family history rooted in the traumatic and bloody Spanish Civil War.

Two days before my Felicia Browne work was to be installed I returned to my studio – the project had taken me away from studio work into filmmaking, writing and project management. All that was finally done – and I picked up an old board and instinctively brought in a new element of collage using two family photographs. The narrative of my family’s rupture is contained in two photographs – the one of my grandparents has been with me forever but I had no concept of its meaning until I began Barcelona in a Bag back in 2013. The photograph of my father was a later find but its significance has come to prominence in its use as part of the Felicia Browne exhibition – demonstrating our intersecting histories.

This work will form part of a small installation, which is slowly evolving, but already the elements are gathering. I’d planned to take my time and sit on this work until it was ready, but I can’t. World events mean that however little one person can make a difference not speaking up is far worse.

The narrative I will be working with is of a Nazi roundup of almost a thousand Spanish Republicans on 24th August 1940 at Angoulême. This was where my grandparents and great grandmother were living in exile, they had been released from internment camps and were living in rented accommodation and working in a munitions factory. Somehow they evaded the roundup and did not board a train carrying refugees to the Mauthausen “work” camp.

My mother has been the keeper of a fragment of oral testimony to this moment. The title of my piece will be They Slept in the Forest.

This is what we know, and this is all we know – that they evaded capture by spending a night in a nearby forest. They knew.

To show my work I need a gallery space. The hunt is on.