I’m working again with a family fragment oral testimony about a nazi roundup to the Mauthausen Camp on 20 August 1940. You can hear my mother recall what she was told by my grandparents here

Earlier this year I exhibited They Slept in a Forest, which contains this fragment, at the Uncomfortable Histories group show.

Now, an invitation to join Dawn Cole and Dan Thompson’s Appletye Paper Trail project, has prompted a whole new response. I’ve been sent a sample of paper from 1940, the year of the Nazi round-up of 927 Spanish republican exiles at Angouleme. This lovely invitation to respond to the paper is what’s got me going again.

Unknowingly, the 927 exiles were bound for the Mauthausen extermination camp. They had been told they were to be transported to ‘la zona libre’, ie unoccupied France. Probably the worst they could’ve imagined at this time would’ve been that the Nazis had more likely organised their repatriation to Fascist Spain. This fear may have been what saved my family that day, but until yesterday I didn’t know about this detail.

You can read about the Paper Trail work on my WordPress site The Other Side, I was thrilled with this creative break through, but left with a sense of mystery surrounding it.

So until yesterday, how my grandparents and great-grandmother knew to hide in a forest while others were taken had seemed shrouded in mystery to me – though I now find it has been documented as (of course) these events affected a much wider community of republican exiles and survivors have been able to bear testimony. Yet the nature of my mother’s anecdote had been both vague and intensely personal. She had held it for probably 60 years and while she may only have received a fragment in the first place, all possible detail had long fallen away. It had also been narrated to her in a political and domestic vacuum, so to speak. This information had travelled nowhere, nor had it met with similar stories from the mouths of others – due to the interruption of such transmissions by many complex socio-political factors including the official suppression of the memory of these events within Spain.

Spurred on by the Paper Trail work  I began to dig deeper into the history and I found several new sources. The German occupation of the region had made the Spanish republican exiles’ position even more tenuous than before in France, and there were events leading up to the roundup which had increased the Spaniards’ anxieties. The Nazi’s had already attempted to ‘organise’ the Spaniards in the region, and the net was closing in on the camp of Alliers near Angouleme in which entire families of exiles lived.

An order was issued to exiles living outside the camp in the surrounding area to present themselves at the camp of Alliers with their papers and as many of their belongings as they could carry – but rumours had begun to circulate. In one French source, a description can be found of the advice (from several quarters) to flee and hide for the night (19 August) even though the destination of this roundup was thought to be to ‘la zona libre.’ By this time many of the exiles were not living in the internment camp of Alliers, or if they did they had found work in the surrounding area and were free to come and go as they pleased. My family hid in a forest, many others were hidden by the people they worked for.

The Gestapo were disappointed that day. They had expected to ‘deport’  2000 Spanish exiles and caught approximately less than half that number.

As I absorb these new details I’m processing the idea this tiny fragment – as it becomes hooked onto a wider history where more facts can accrue – is not just about one lucky escape. Hundreds of exiles disobeyed the order to report in to the camp of Alliers.

I will continue to plan my tribute for the 927 taken (I’m working numerically) but will now consider further works to encompass this new information. On a personal level I feel a curious sense of wonder and some relief. It feels nothing short of miraculous to locate our fragment within a body of information – the itch of curiosity is satisfied on the most basic level, but more importantly it brings me closer to understanding. I can now inhabit my work with greater confidence and I hope with sufficient sensitivity to the victims and survivors. 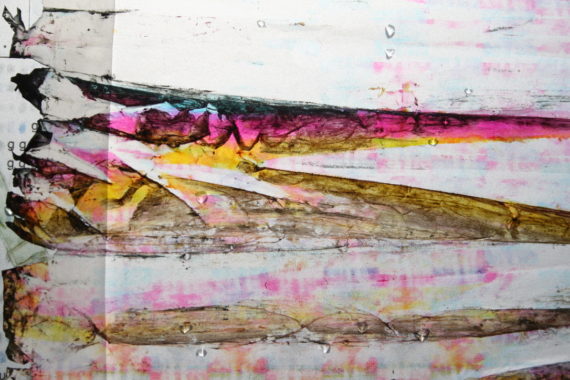 My last post was called ‘Painting Extinction’, and in this post I’m mulling over giving up my wonderful yet increasingly expensive studio space. Gloomy, moi?

For the past year I have been working on projects which take me away from studio practice. In this time there have been major changes to the environment which surrounds this space. Smart offices have replaced a grungy recording studios on the ground floor, and the taxi firm on the upper floor next door to my studio has vanished. Tragically a once thriving family electrical firm went bust (after 3 generations) and vacated the plot across the way. Not only is this incredibly sad, it also fundamentally alters the relationship with place.

Within the studios major shifts have also taken place in my ‘absence’ (I get in every so often so I put absence in inverted commas). Artist have always come and gone, but when stalwarts move on it sends shock waves. I’m just not good with change, I guess, but when an artist with 10 years of exemplary professional practice relocates to another city, it leaves a crater. We didn’t socialise outside of our studio practices, but he was always there painting. We’d put the increasingly lop-sided world to rights and sometimes squint at each other’s work when asked to. Good humoured and friendly beyond the norm, he and his large scale works (which filled the space) are irreplaceable.

Joni Mitchell’s Big Yellow Taxi runs on a loop inside my head.

I am now second longest standing artist on my side of the studios, an oddity in itself (as once I was the newcomer), and I’m wrestling with letting go. My life has changed too, and I’m a carer now (part-time in another city).

Through necessity I’ve kept my practice going at home mainly and the work has adapted. I’m working a lot with collecting objects, photography and collage. I’ve lost the thread with painting to be honest. This has happened to me before, and painting came back – so I won’t give up on painting yet. However, I do have to acknowledge a natural break.

I still don’t know what I’ll do with my space ultimately, but I need a good sort out. I feel instinctively that going though the contents of my studio will help me decide. A self-storage unit feels like a sensible option if needed, and I can certainly carry out my current level of practice at home (with a good sort out at this end too). I’ve been incredibly emotionally attached to my studio and have always felt I would regret giving it up too much to even contemplate it for too long. The difference now is that I can hold the thought in my mind, talk about it (even write about it) and make tentative plans. I never thought this time would come, but it seems it has.

Embracing change and moving forward is actually quite in keeping with my worry about working in acrylics due to environmental impact. Perhaps painting extinction wouldn’t be the wrench I’ve thought  it would be.