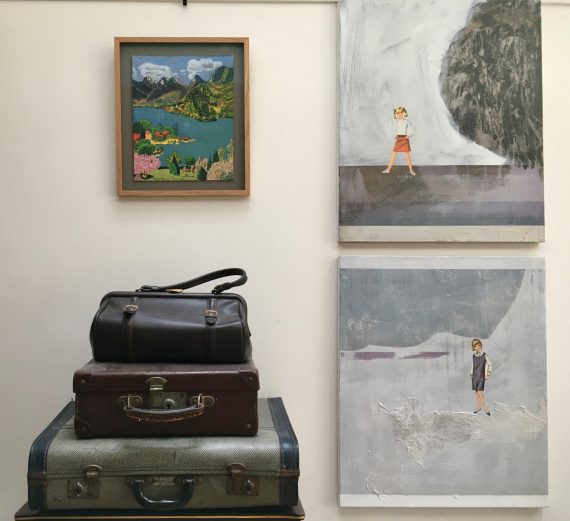 View of my home with a painting by my father (in 1950) hanging above some vintage suitcases and alongside two works of my own from the Buenos Días Dictador (2018) series.

Those of you who know my creative work will know that I’m haunted. Yes. I live with ghosts.

I’m going to share a secret. I talk to a handbag. I’ve even written letters to it. No, I’m not loosing my marbles. In 2013 my grandmother’s handbag came back into my life and whispered in my ear. From this moment my life changed and my art practice blew wide open. I knew what I had to do, but I couldn’t guess where it would take me. I’ve just commemorated 6 years of works responding to the Spanish Civil War and my family’s political exile. Previously unspoken, I’ve sought to bring to light this history in order to understand my heritage and heal trauma wounds.

My practice has come a long way, but since those first whispers in 2013 – in which the rise of fascism seemed more historic and remote than it does today – a curious echoing of past times has struck me again, and again. Incremental, creeping closer, and ever more distinct, the feeling of deja-vu pervades. It announces itself as a sudden chill, or today as a moment of terror in reading about the multiple ways in which this brand new Conservative administration already threatens to mimic all that our American cousins have endured in their President for the past 3 years. As if we didn’t already know that Boris Johnson was the perfect UK double for Donald Trump.

My 6 year haunting – yes, I live with my art now and am surrounded by ancestor talismans and tokens – begins to feel prophetic. My grandmother has been whispering through her handbag for so long now that sometimes I admit I haven’t always heard her. Life became full at times and I forget to listen, but believe me I won’t be making that mistake again. Abuela (as grandmother is called in Castilian Spanish) is tugging at my sleeve.

I know that she will show me what to do, and this is a great comfort, but she’s taken great care to remind me how quickly the wind can change which is unsettling too. She knows the supreme value of preparedness because she’s survived a Civil War. Abuela will guide me in her gentle way, and then fasten her apron strings to make us cafe Bonbón. She knows how to cajole, but from now on she has my full attention.

The atmosphere of sudden departure is in my DNA. My family fled for their lives from Spain along with almost 500,000  Republican Spaniards when the fascist dictator Franciso Franco seized power in February 1939.

I know that I must ready myself in whatever way I can. History repeats itself, this we know. I’m not prophesying war and catastrophe, I’m obeying the unspoken laws of my DNA. I know I’m not leaving tomorrow, but I’m vigilant and quietly offloading. I have already asked myself what I could fit into packing cases and would there be time and money to ship my work? These are unknowns. A crossing of bridges.

Abuela smiles her approval. I look at the jewel-like object I know I would take with me no matter what. It would be my father’s only known/surviving painting from 1950, shared on Instagram just yesterday @s_boue, which also features in the image above. Abuela pinches my cheeks affectionately, and I’m suddenly taken back to the memory of my father sitting under an acacia tree writing while we were on holiday in Spain in 1972.  He would have been writing something other than his his plays, as by this time he had given up on playwriting for the sake of his mental health. I’ve come to view his exile theatre as creative resistance, and I increasingly see my own work in the same light.

Abuela beams at me. I’m old enough for these truths to be known, but then a shadow passes over us and her face becomes suddenly sombre. Fascism creeps in through the back door, she says with a shudder. I nod. It begins with fear; of what you read in the newspapers and what you can no longer say freely.  I understand now without her saying it that these 6 years have been a preparation too. All this time I have been on a parallel mission of making and packing, and leaving a trail for future generations – as I now realise that my father did in his time.

Life and art are never separate, not even if you try to wrench them apart. It’s been a long time since I wrote in quite this way, but we are living in increasingly frightening and unsettled times. My blog is a call for preparedness, but above all for creative resistance. Finding spaces in which the mind can be free become more vital when our actual freedoms are under threat. Every act of creativity and self-care is a means of survival. Reaching out and organising is what we must do.