First impression of the residency: Kafkaesque. It appears as an institution, possibly a police headquarters or seminary for lay priests. Silent corridors, steel doors, absorbed figures pass by, some speaking German. Then the typical clues of paint splatters, lumps of carved wood, dispel the heaviness. The silent figures smile, laugh, and are most engagingly earnest in their desire to smooth my initial settling in.

How can I sum up my experience? It was huge and with so many intense layers. I am going to have to think about it.

The work. A lot of serious work got done and deeply explored. I was completely immersed in the paintings. It was exhilarating to be able to live with the works the whole time. It was such a rich stupendous, privilege to see and experience so much, such marvels. The people, the culture, the museums were amazingly stimulating. And so kind to me.

The fact that I was there for a finite time, four months, meant that each day, each person and experience was precious, to be grasped. For me and also for the people I met. So it was made the most of and valued.

There was also the tremendous experience of isolation, examining myself, loneliness, questioning, not always easy at all. An image of this could be that I was put into a black dark empty box. At first I could see nothing at all. Gradually I could sense something, and then I got some matches and was able to see glimpses. With the glimmerings I felt more at ease. Then I got a lighter, could see more, and began to make adjustments. With the help of the lighter I found a large bright candle that shone steadily lighting up much more and I began to settle in making a kind of nest. When I was then lent a halogen white light it illuminated brilliantly into many corners that had been unknown before. I became exhilarated and astonishingly happy. I felt I was at home. An exciting fertile interlude unfolded. Then the halogen light's plug was switched off, the candle blown out; I had to leave. My box, that ‘home' is still there, as is the candle and the electricity, but I am not.

I am here in London with the Berlin experience inside me, a high light vision. My perceptions, knowledge and prejudices altered, my vision enlarged. How precisely this will affect my future work I don't know but I shall continue to observe and cherish.

Everyone asks me, ‘what did I think about Berlin?' Everyone is interested. It is the buzz city now. Especially now, I should add, because Berlin, the city, the word, conjures up a charged frisson and always has. In all those different worlds and situations. What I think is that Berlin now is like Paris was in the early twentieth century, when writers, painters, thinkers went to live in Paris. It was cheap, sympathetic, and easy for artists to know each other. They learnt the language, lived a bohemian life style, it was the place to be. That is what Berlin with all its energy and forward hopes is today. The place to be. Cheap, friendly, fun. Not the place to make big bucks or get international fame. New York or London has money. Berlin is broke. At this moment though, for lifestyle and for adding to one's contemporary cachet it has got to be Berlin. That's why there are so many English, American, Canadian, Australian, New Zealand, Portuguese, Siberian, Ukrainian, Brazilian, and French, you name it, artists, writers, film-makers, celebrities there in little tight knit, mutually encouraging expatriate groups. Many artists now have as their addresses, ‘lives in Berlin and London', or ‘spends his time between Berlin and New York', and so on. It is wonderful to be special and part of the hot thing. Jessica Rankin, Sydney, New York, now resident in Berlin, showing at White Cube Hoxton Square, film director Stephen Frears, in Berlin after The Queen, Brad Pitt has just bought a penthouse near where I was, Tor Strasse, as examples. Very exciting. Go there. Join in.

(Tip: If you are going to be there longer than six months, learning German will make every thing easier.) 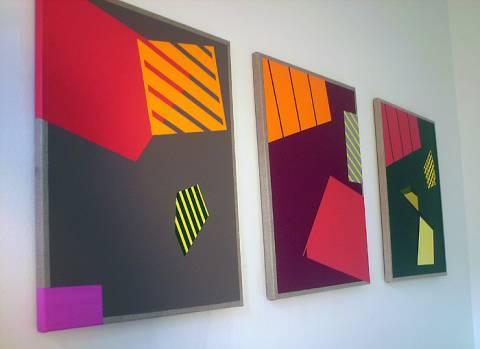 Rough, reduced, poetic, essential, contemporary and real, Berlin. The equality, accepting friendliness of people, low cost of living, ease of getting about at all times of the day or night, the safety and lack of harassment, means it is an easy place to live. Going anywhere alone is normal, acceptable, and safe. In these trendy eastern districts of Prenzlauerberg, and Kreuzberg, you can go out without feeling self-conscious or that you have to conform to a prescribed sense of style. They may be spectacularly way out or dress in jeans every day, anything goes and people don’t judge each other on how they look.

Berliners have a very practical approach to everyday living, which makes life easier. Because of the honour system, public transport works efficiently, as well as being much cheaper than in London. There are no queues nor bottlenecks getting on and off the trams and underground; cars are much less used. It’s either bicycles, or trams, U-Bahn or S-Bahn, or buses. Traffic flows and also one almost always gets a seat so it all is very much easier and pleasanter travelling around. Good bike lanes make a difference, as enormously, does tolerance of bicycles by pedestrians, bus drivers and cars. They don’t try to kill cyclists, nor do they steal bicycles. In fact honesty and everyone obeying the rules is the norm. All of which is most striking and makes life much easier just like the low rents. Which of course may well have changed in ten years.

People are very health-conscious here, especially about food. There are big Bio health food supermarkets, as well as weekly organic markets. Organic food is not as expensive compared to non-organic as it is in the UK. In the Health food shops and chemists there are not shelves of vitamin or supplements, except for pregnancy, although funnily enough, there are shelves of alternative herbal remedies and tisanes to cure various health ills. That’s what they do instead of putting extracts into capsules; they make a brew.

Recycling is very easy and is an everyday part of life. The Kaiser Supermarkets give money back on plastic water bottles and the glass beer bottles and crates. Mostly beer in bottles, is what they drink, even young girls as well as boys carry open bottles of beer and drink from them on the U-Bahn or walking down the road. Like all alcohol here it is very cheap. From 0.30 to 0.5 euros per bottle and then a refund back. A good wine may cost from 3.99 to 6.99 euros and cheaper, drinkable wines start at about 2 euros in the supermarkets. The best German champagne, Sekt, (like a prosecco), was 3.99 euros special offer at Christmas and now is 6.99. It must be because Germany doesn’t tax alcohol as much as the UK does.

Berlin is the only city I know where people leave furniture, shoes, clothing, books, anything they don’t need any more, on the street for whoever can make use of it. This is not rubbish or junk but things that they don’t need any more and someone else can use. It is also not considered fly tipping and against the law with heavy fines, but rather a sharing decency. On the U-Bahn on a bench there may be a pair of pink trainers or on a street corner there may be a pair of green shoes standing there. I got all the furniture for the studio from heaps of furniture in the snow.

It is probably one of the best cities in the world to be poor and depressed in. Or just to enjoy. There is space and the energy of expectancy that they’re on the up. Berlin. My Berlin. Berlin for Artists. Berlin for Life. 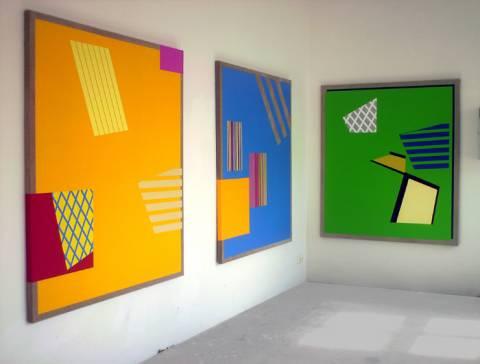 Frauen die malen, drücken sich vor der arbeit. (Women who are artists don’t want to do housework). Instead of a couple of hours of cleaning and then a pleasant lunch, maybe even a last visit to a museum, it was clean, clean, all day. Once one starts to look for dirt marks they are everywhere and have to be cleaned in a systematic way or else one just treads marks back in. The refrigerator and the stove to be cleaned, drawers to be emptied, everything off the walls, packing to be done. Well it couldn’t all get in to those ridiculously small cases. How did it all get here? What I couldn’t take back I left behind, giving some to Cathy, in the studio upstairs and the rest I put at the top of the entrance foyer stairs in that wonderful Berliner way: CDs, marking pens, tapes, films, new socks not the right colour, tinned foods, masonry nails, bottles of beer, plastic basins, paper plates, extra cups, etc. All useful stuff but I had to fly back.

Leave when you love a place, means it will always stay with you. So Berlin is part of me now.