All good things come to an end…

I feel that my successful and fulfilling Construction Project has naturally come to an end. Intended as a two or three week project of consecutive days, instead I have spend 24 days over the last two months making test works of new ideas in my studio at Rogue in Manchester.

I feel liberated from the constants I felt I had, able to move freely around my mind in order to explore ideas, respond to space and in the selection of materials I choose.

Before the Construction Project I felt stuck. I set myself a set of simple rules to construct, document and deconstruct a piece everyday I got into my studio. I had to use whatever materials were around me, therefore I couldn’t buy anything new.

I have now got to the point of reflection, whereby I am able to look back on the images I have taken and take time to think about which were successful, which weren’t, which pieces had mileage and which I could refine. Some I could easily dismiss, others I am excited about taking further, some works are great just as they are, with no extra work needed. 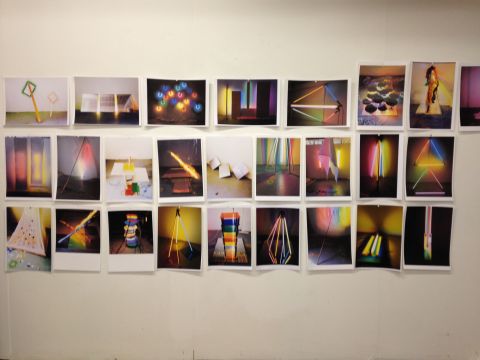 Singular tone flat/panels were the order for today.

I paired a sheet of coloured board with a shard of painted 4mm acrylic. The contrast in surface, texture and opacity were delightful (even if I do say so myself).

I like that from the images you can not tell how big the boards are, they could be any size. This gives me room to experiment with the idea for future projects/works.

I would like to run through the whole spectrum, these three shades are just a tester. I would also be interested in pairing complementary colours together. e.g a red board with a green shard or acrylic, etc.

The juxtaposition between the neat and precisely cut board next to the organic and sporadic shapes of the plastic work in contrast with each other.

These works are, for me, sculptural. Even thought they are 2D, perhaps you would call them paintings, I see them as models for 3D works or illusions of what sculptures could become of them.

I must admit using paint is rather nice. What is happening to me???

Referencing the painterly even more than on any other day, I made a simple balancing construction from postal tubes and painted aluminum. The colours reflected in each metal sheet as they were positioned one on top of the other. Levitating on cardboard tubes. The singular mirror laid on the floor makes the work. It allows for a clear reflection of all the aluminum sheets above it.

This sculptural Mondrian-esque arrangement could be added to using different colours at alternative heights. The simplicity of the work is what is most successful about it, in my opinion.

When I first made the work it seemed precarious in the way it was balenced, however, after leaving it in my studio without any interruptions (except for a heavy industrial sewing machine vibrating intermittently above on the next floor) for 2 weeks, as I nipped to Devon for a holiday in that time, it was surprisingly still standing on my return. Testament to the strength of the second hand postal tubes.

‘The Language of Mixed-Media Sculpture’ Book

My practice is discussed at length in this new survey of mixed-media sculpture, alongside several colour images of my recent installation work.

The Language of Mixed-Media Sculpture by Jac Scott will be published on the 10th May 2014 by Crowood Press.

The Language of Mixed-Media Sculpture is both a survey and a celebration of contemporary approaches to sculptures that are formed from more than one material. It profiles the discipline in all its expanded forms and recognizes sculpture in the twenty-first century not as something solid and static, but rather as a fluid interface in material, time and space.

Useful technical information on a myriad of processes and materials

Have a sneak peek at the book here: http://issuu.com/jacscottsculpture/docs/lmms_sample 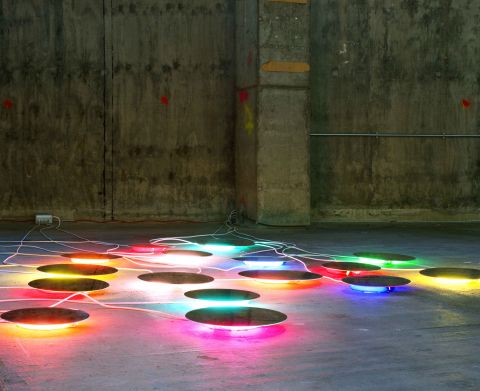 The question at the back of my mind yesterday was ‘could I have the same effect without a light bulb?’

Depending of how you position the aluminum sheets, the strength of hue and colous of paint you use and ultimately the whiteness of the wall behind; you can achieve a successful, be it more subtle, delivery of this idea.

I know for certain that it would not have worked if one of the sheets had of remained blue.

It would not have worked if the wall behind hadn’t of been painted bright white.

It would of helped if the floor had of been reflective or painted fresh either light grey or white.

It might have helped if the metal sheets were larger (this would of also made a bigger impact on the space).

So many aspects contribute to the success of an idea that result in a work. This piece certainly demonstrates the painterly within my practice, without the need for electricity. This is somewhat of a breakthrough and a line of inquiry that I would like to explore further.

What this space. I am becoming brave!