After an interesting first day of exploring the estate where the Merz Barn is located, I tried to set myself to work on something, anything.

I had put way too much pressure on myself to fabricate something, but I did not know what to make. I had so many elements around me to explore, so many exciting forms and shapes, different colours, equipment and not a clue what to do with them all.

You could say I was overwhelmed.

I felt I should be making something. I felt I had a very limited amount of time on this residency in which to come away with something credible, exciting, final and/or lasting.

I tried to make something out of found bamboo sticks; a shape in the landscape. My aim was to cover it in plastic and light from within; trying to think about a future commission I had been set. It didn’t work, the bamboo was too weak to hold sturdy. It collapsed shortly after this photo was taken. Boo! But maybe that was a good thing, because if it had worked then I would of spent all week playing with that idea and that would not have allowed for new struggles, deliberations and new ideas. 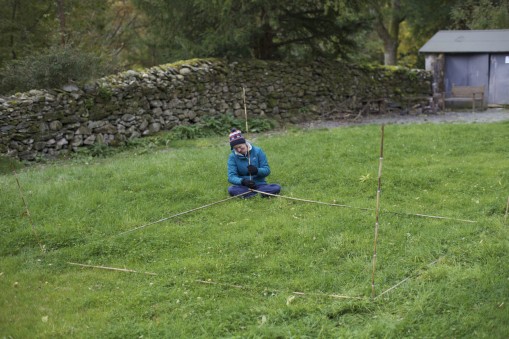 After a moment of self-torment I grabbed a staple gun and a roll of plastic sheeting attached it to the length of a whole wall in the Shippon Gallery. This was to become the basis for the outpourings of my brain for the duration. A brain chart, a mind map, a spider diagram, whatever you call…

I started by en-circling four things to focus on:

Why be an artist?
What does my work intend to say/do?
Why colour?
Why light?

I added a few things initially, but then started pondering and scratching my head – hard! This residency was starting to push me mentally and emotionally. I never expected to feel like this, or be doing this. I expected to be making, but I wasn’t.

I had brought some books with me on the off chance that I might pick them up for a read. Let me enlighten you on my reading habits – I don’t! – I am dyslexic (aren’t most artists?) and therefore struggle to read a chapter before instantly forgetting it, I find myself reading the same line over and over, I loose concentration and therefore I hate it, it is a chore.

But, BUT I decided, seeing as there was little else to do, except procrastinate by going on a lovely walk (which I didn’t), that I should read. Part of the Merz Barn set-up includes a little yurt library that Ian and co built in a day. It is a cosy hub full of his art book collection, soft chairs and a heater. I curled up in there with a cup of green tea and got stuck in. I had selected David Batchelors newest essay ‘The Luminous and the Grey’ as my starting point.

For me this was a momentous occasion. The last book I read cover to cover (not sure I should be telling you this) was over 7 years ago!!!!

I began to recognise theories and arguments relating to the use of colour in out direct environments, it made sense. I hurriedly circled interested snippets and quotes. It felt like all my questions could be answered, whereas before I thought they couldn’t and wouldn’t be. This is not to say I haven’t read around my subject, but instead I have dipped in and out of essays.

I made the decision to set myself mini-projects in response to and after I had read each chapter or section. A starting point.