I’ve just seen the PULSE festival proof before it goes off to the printers, and am now scared. For some reason, I had blithely misread the previous emails telling me where I was performing, and assumed it was the nice and compact New Wolsey Studio. Turns out it’s not. It’s at the New Wolsey Theatre. That has a capacity of 400. Suddenly my gentle research method doesn’t quite seem enough. I need to be building props already. And costumes! However, I am thoroughly enjoying my quiet period of book-based research whilst it lasts: it’s like being back at college. I don’t think I’ve had to research anything in quite the same way since graduating 8 years ago. Another interesting fact about Remedios Varo: apparently she and Leonora Carrington once fooled dinner guests into thinking they were eating caviar, by mixing tapioca pearls with fish stock and squid ink. This isn’t strictly pertinent to my research, but could well make its way into the post-show talk I have also agreed to do.

So: scared and excited in equal measure.

I am a bit late in starting this blog, as I had intended to chart the complete development of my project from the moment I got my lovely Arts Council pack through the door. That was the end of February. In the meantime the deadline for the ‘early bird discount’ application fee for Edinburgh Festival Fringe has been and gone (it was Wednesday), and ALL my efforts have gone into that.

I am taking two pieces to Edinburgh: One Minute Birdwatching (http://www.oneminutebirdwatching.com), and Hear A Pin Drop Here. The first is sorted. I have submitted the application, with publicity photo, got a location from the council parks department, and EVEN managed to make a piece that is so unclassifiable that I don’t have to pay licensing as either street theatre or public entertainment. Great!

The second piece is lagging behind a little. I have the idea (basically finding any quiet spaces in the midst of all the festival crowds, photographing and GPS-tagging them, uploading them to a website, and then eventually giving a public performance lecture about my dislike of crowds). I have a nice idea for a publicity image. Still need a venue/website/actual image. Have until 11th April to get it into the programme, or 5th April if I want to spend my grant this financial year. Which I do, otherwise there is too much of my fee disappearing as tax.

Simultaneously, I am developing my other performance: An Audio Guide to Varo’s Harmony. I am performing it as a work in progress at PULSE (Ipswich) on 25th May, and then at Norwich Arts Centre on 30th June. It started off as a 5 minute performance (see video), but I have promised both venues it will be 30 minutes long in its next incarnation. I have two months to sort this out. I have bought a rare, out-of-print book on Remedios Varo, which arrived this morning, and I spent the whole day diligently reading (in the garden). I’m a third of the way through, and have discovered that Varo herself was the source of the infamous brawl amongst a group of Surrealists which resulted in Brauner having his eye put out with a broken glass. Research, see?

I am devising little experiments to represent each of the objects in her painting Harmony, with regards to their potential for sound. A few weeks ago I got carried away with looking at light sensors to find out if any of them could subtly differentiate between the various wavelengths of visible light. It got a bit confusing, and I also started to panic because I was not seeing the wood for the trees. I went for a brisk walk (who needs a studio?), and thought the whole performance through, and now that I’m happier that there is a structure to be had I will re-visit the details again. 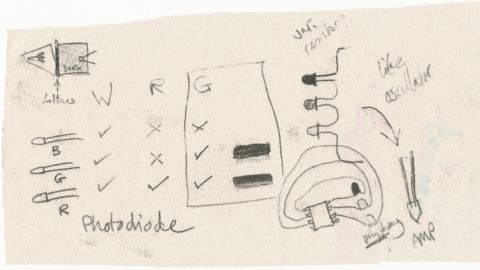