….. talking of images that are unreadable as emotional signifiers and new media and unusual juxtapositions [which we were] I think I may have something that ticks all the boxes:

Two potatoes left in the Aga for two days – yes I know- but you can’t smell anything burning in an Aga…..

they are black and gorgeous and metallic. I have seen burnt fruit used in work before, but these have a deep charcoal black under the metallic coating and a dark, mysterious interior.

Concrete and charcoal potatoes………..it calls to my soul. 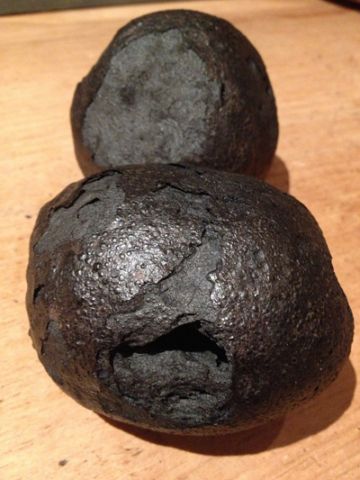 Sharon Hallshipp and Rob Turner have kindly left comments on my last blog where I mused that viewers seemed drawn to feathers and I wondered if they were an emotional signifier of any sort.

Sharon bypassed the feathers and felt drawn to the concrete – as am I. It’s surprisingly vulnerable for such a heavy material. I like its weight and the fact that it is what it is. Its solid and heavy, its colour is reminiscent of unloved 60’s buildings and of building works……take me as I am, no pretensions, not asking to be admired or loved. No poems to concrete.

If I choose to continue by interrogating concrete it would be an exciting journey – of continual revelations I think.

Rob offered the Indian brave and the feather headdress that signify warrior status. Now of course all I can see in my piece are Indian feather headdresses! Maybe why I felt the piece was strong where I had expected vulnerability.

Images are just so complex aren’t they?

As artists we adjust and adjust until the medium, shape, colour, frame, placement, lighting give us back the emotional charge we were searching for – and then along comes the viewer with their box of completely different Life Experiences packed with images signifying emotions quite other to ours….

As human beings we do seem to have a culturally agreed encyclopaedia of symbolic images and colours that we share and that allow us to ‘read’ non functional objects from an emotional standpoint. Only so good so far though. White being the colour of mourning in much of the Asian world it is instantly obvious that as an emotional chart and primary reader of an object/image its worth is pretty limited.

Maybe that’s why we are so interested in images and objects that are ‘unreadable’ on that scale?

Objects and images rendered in new media, in new ways, new ideas, out of scale, objects in juxtaposition to each other in ways not seen outside art………..

Feathers and concrete are now ensconced at an exhibition in Mile End-eliciting some comment as people go round. Feathers are something that people seem to relate to – on a fairly superficial level I suspect. . Not sure that they are an emotional signifier. If they are – of what?

It’s the concrete that forges the dialogue and forces the work out into a bigger space than it actually inhabits.

The piece has made me start thinking around this ability of some works to have greater presence than others. It is of course completely unrelated to size – which makes a work monumental. Some monumental works have this presence, some don’t.

I ruminated en route that feathers are of course – like all found objects from the natural world – not something that one can upscale. Next week I am hoping to get back into the studio for two whole days. By then the work will be back with me and I have an itch to paint around it …the deep blues and reds just say oils to me and I haven’t painted in oils for about ten years…so in the spirit of ‘go and play and bring back what you’ve done’ I will see what two days will bring.

Even thinking about painting has started me doodling and sketching in my Christmas shopping list book.

Maybe they will all end up with concrete and feathers this year.

‘Holding Ground’ [an area of sea which will hold an anchor] is decanted from its tray.

Bit of a struggle, even though several jars of Vaseline were sacrificed in the making of this work….

I said that it would have to have a presence for me to be happy with it. I had been expecting fragility in opposition to the heft of the concrete. I thought maybe the feathers would be just overcome.

I have got something quite other – the feathers are visually very strong. Fascinating. I can’t quite work out why.

I am really pleased with it. I love the gritty greyness of the concrete, its imense weight and the fact it is so powerful even when broken.

Both pieces are an identical shape and size but because of the placement of the feathers, look and feel quite different. I have spent several happy hours offering them up to each other in a myriad different combinations. Every time a shift in mood.

Maybe this work should become a series of photographs….

Having been sent off to ‘play’ by my tutor I am intending to paint and draw ‘around’ the work and see what comes next.

I am beginning to enjoy not having a project on the go and to be able to immerse myself in making for the sake of it – even if I know my first seminar and crit is coming up far too soon ………..

Now how do I get this to college? Weighs a ton.