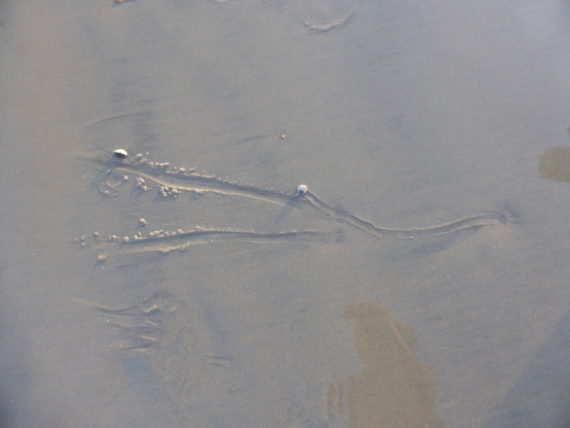 I’m still watching the sea, waiting for the tide to turn and retreat from the beach so I can watch the beach. Noticing how it effects it’s immediate environment, the activity as it changes, I go out looking for drawings. Lines in the sand.

I’ve seen the pretty feather shapes before, the weaving of dark sand into light too. There are grooves in the sand and in the rocks, what might have been the imprint of a star fish. Today I’m at the beach with a friend. We are crouching down, looking really closely. Silently watching for something to emerge. We both notice, I think at the same time. Whelks. Racing whelks. Lines made in the wake of their movement from rock to elsewhere. We stood and watched for some time, they struck me as being pretty speedy. Lines crissed and crossed each other, apparently without order. Several were at times following the same line created by the whelk at the front.

I offered one a line to follow. I drew in the sand with my toe. I drew another, offering a choice and waited to see which it took. Some tense moments followed. Slight rocking movement accompanies them, left to right, right to left, creeping across the surface. The whelk reached my first line and began to turn. It avoided the first line and pointed towards the second. It kept turning. It took a much longer route to avoid both of my choices. I tried not to feel too rejected, more curious about these tiny creatures and their activities between the tides.

Standing for so long in one spot my feet have begun to slip beneath the surface. This space which is neither land nor sea, but alternately both, body weight has displaced water. I now stand in a puddle of my own making. Imprints quickly disappear again as I move, shifting sands.