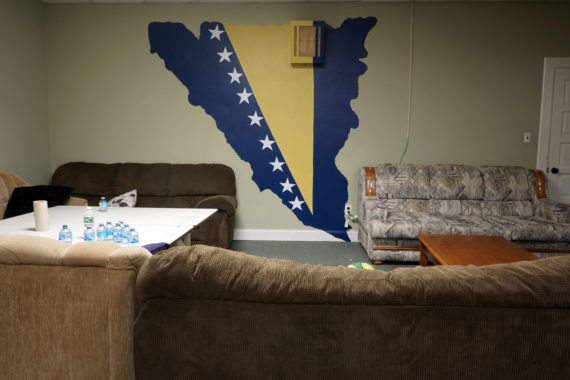 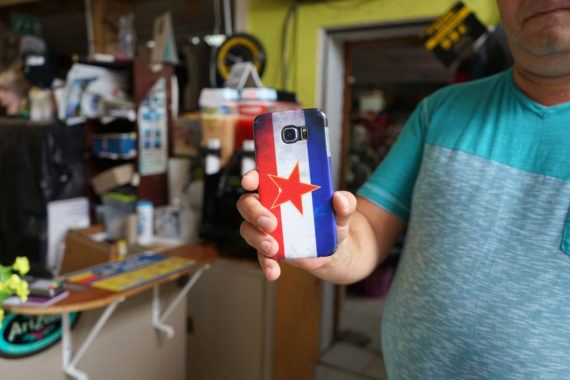 I woke up this morning feeling restless; I still haven’t found a way in to the Bosnian community. I had started to sense that perhaps they have settled in a particular part of Utica, where all the restaurants seem to be and where there is a mix of different migrant backgrounds, but I needed a point of contact. After some unsuccessful trips to Bosnian cafes and restaurants, many being closed due to holiday season, I thought I’d try my luck at one more. So I took the Sculpture Space studio bike and set off in the morning. As I cycled I found myself reaching the same area again, near the other Bosnian cafes and restaurants. I finally reached the destination, Ružnić Market, a restaurant and retail store. I entered and dived in, speaking in Bosnian to the older man running the shop, we quickly entered into a conversation with him showing me a book titled ‘Bosnian Refugees in Utica’. He pointed to the cover explaining it was a picture of his family. 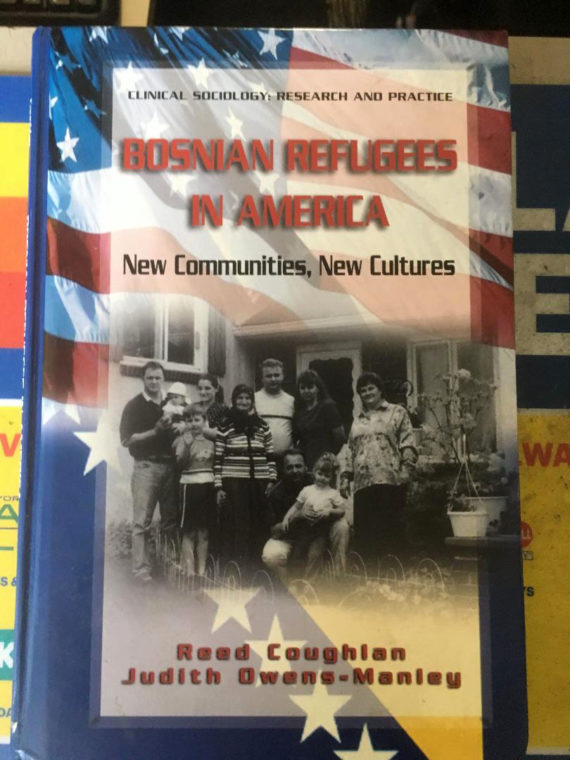 It’s clear that writers, journalists and perhaps artists have regularly visited this community over the years. I soon discover the successful life this family have made for themselves here, they arrived with $100 to Utica and today they have their retail and restaurant business and are also property developers, showing me pictures of properties in Croatia and Bosnia as well as mentioning the houses they have bought and developed in Utica. They are grafters, I notice the restlessness of the old man, he doesn’t want to stand still, there is always something to do, to show, a nervous energy. 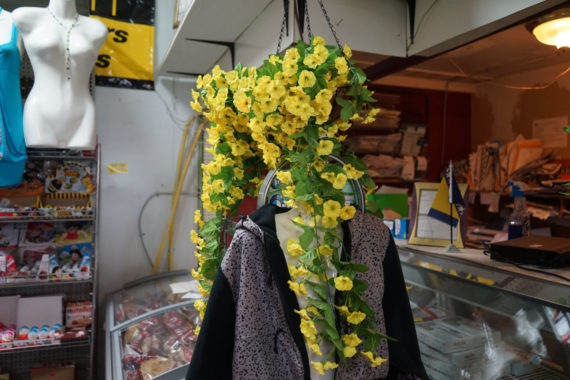 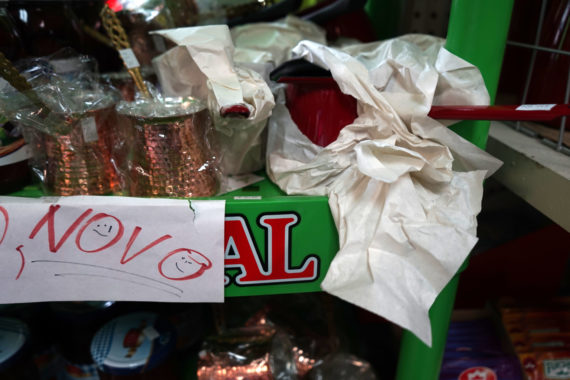 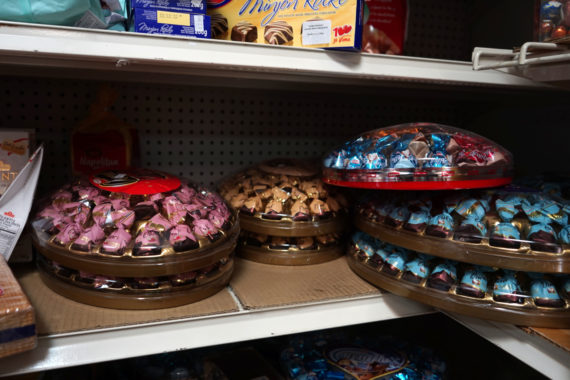 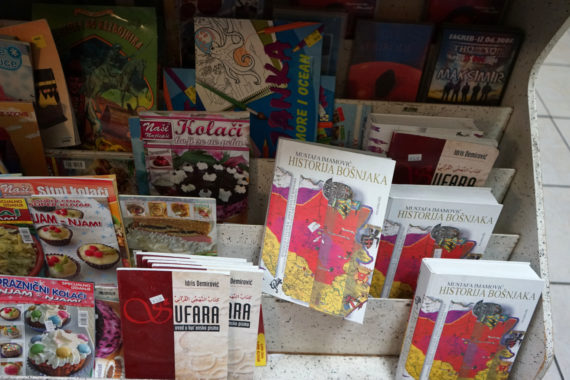 As we chat the bell above the shop door keeps ringing as customers enter and leave. Majority are Bosnian. The man’s son enters – his name is Samir. I observe that he seems to be a big character in the community – confident, funny and lives life by his own rules. For the next 3 hours Samir chats to me about day-to-day life, his businesses and outlook on religion, nationality and life in Utica. As he talks to me and serves customers I walk through the shop, observing the eclectic mix of Bosnian food, music, books and clothes. There’s an air of eccentricity in this community hub, a creation of a world they want to live in, reminiscing the ‘old times’ of Former Yugoslavia. He says, ‘I’m a communist’ with a glare of childlike excitement. He proudly shows me, with his father, a folded up Yugoslav flag they keep above the shop till. I ask to take a photo of his phone cover, also depicting the flag, which he happily displays. He makes clear that he is not into ethnic patriotism. 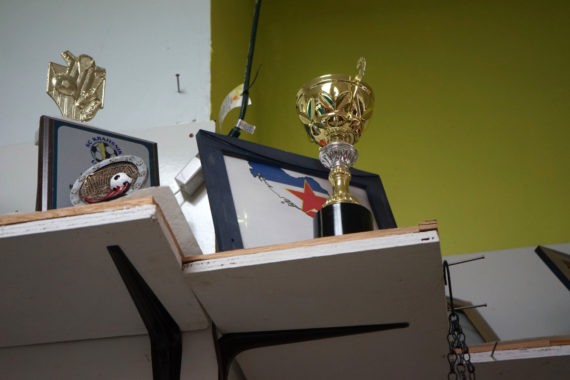 As a backdrop, the region of Bosnia and Herzegovina was one of six republics making up the Federation of Yugoslavia post World War II, alongside Croatia, Serbia, Slovenia, Montenegro and Macedonia. This changed during the Yugoslav Civil War and these regions have now become independent. The region of Bosnia and Herzegovina is made up of a population of mixed ethnicity, Bosnian Serbs who are Christian Orthodox, Bosnian Croats who are Catholics and Bosniaks who are Muslim Bosnians. How people view their identity is complex in this region, some are drawn to their religious ethnic origin whilst others prefer to refer to themselves as just Bosnian, without religious connotations. This is a complex subject and I may refer back to it during the following blogs, but for now you get the basic idea.

As I stand in the shop, feeling the stereotype of a nosy tourist with a camera dangling from my neck, I wonder if I am being strangely imposing. However, Samir soon offers to give me a ride in his car on his way to the bank and show me some things around the neighbourhood. I took the chance enthusiastically, and it turns out Samir is the perfect man for the job. We start driving through the neighbourhood and he starts to point to every single house in the neighbourhood that is owned by Bosnians, all within one specific region, near his shop. Incredible, I thought, as I wouldn’t have known otherwise. But as I look closer it suddenly becomes obvious; the façade, colours and presentation is quite typical of houses in Bosnia and Herzegovina. There, people tend to make their own houses, taking a lot of pride in the finishing stages of presentation, if there is money to complete the job. Here in Utica they have created a quirky architectural hybrid of American and Bosnian suburban housing, echoing what must be a cultural hybridity, with sons and daughters adapting further into the American way of life. 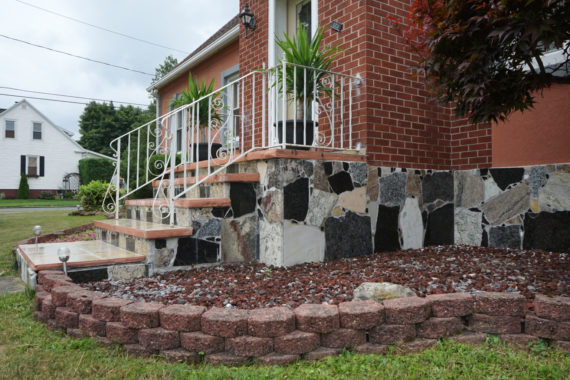 Our car journey was filled with spontaneous talk and references and snippets of Samir’s life. He mentions some health issues that were life threatening and the miraculous recovery he has achieved every time, proving doctors wrong along the way. He still lives with medical issues but this doesn’t faze him, his joie de vivre outlook is a mixture of negligence and resilience and I’m not sure which side to fall on. But somehow he has convinced a stranger that he’ll survive anything. He has, after all, survived a war. This is a big character, a man of the community, saying hi and exchanging jokes with everyone he sees, American, Bosnian and any other background, and I have only had a small window of insight. As we end our meeting we discuss plans to meet again when he has time away from the shop, where he can hopefully show me more sights and locations in Utica, and I’m excited about the prospect.

Thank you Samir, a great and generous inside introduction to life in Utica.