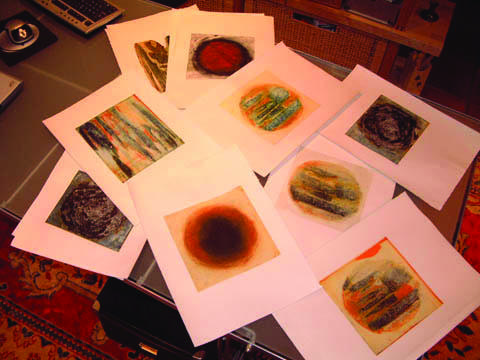 Fine Art degree students at Cleveland College of Art and Design have been holding their final show this week at the college’s Burlam Road site.  The show, which marks the culmination of their honours degree programme, opened on the 7th of June and closes on Friday evening.  Sponsored by Dickinson Dees Law Firm, Simon Bailes Peugeot and mima, the show was described by CCAD Principal David Wilshaw as ‘one of the best ever’, an opinion echoed by mima (Middlesbrough Museum of Modern Art) curator Judith Winter who offered her congratulations to the students for the quality of their work.

The twenty students have transformed the rambling premises at Burlam Road into a spacious gallery.  Unusually, the work this year has a strong emphasis on drawing and painting, from Jo Brundall’s questioning images of local landmarks and Lisa Wilkinson’s sensitive introspection through to Tish Bloom’s sculptural canvases drenched in colour.  An exception is Nigel Clynick’s eerie installation, an elegant solution to pollution.  For a catalogue or more information on the artists, contact the Fine Art Department at Burlam Road on 01642 806626 or better still, come and see the show!

I thought I’d be a last lone voice in the wilderness but it seems we’re mostly still up and running.  My grizzles and grumps pale somewhat in comparison to poor Jay – you have my most sincere sympathy, what a terrible thing to happen but as you say, a phoenix will rise from the ashes.

Well our show/s came and went.  I mentioned a while ago that CCAD in its wisdom decreed that we had to invite family and friends on a different night to the ‘VIP’ reception, ostensibly because of the crush of bodies in our crumbling building.  What they failed to make clear to us was that they were circulating to the great and good of Teesside invitations to a general open evening of all three sites on the same night, at the same time.  Well it doesn’t take a lateral thinker to realise that VIPs cannot be in 3 places at once and guess where they were not?  Apart from one Professor on the hunt for prospective MA candidates, R and I didn’t spot any of the local academic hierarchy (he’s familiar with most through business).  The press fared a similar fate.  Despite having circulated our specific invitation to arts eds in general, it would appear that they sent their chaps to Hartlepool which features in a wonderful article in tonight’s evening paper as the ‘fine art show’.  To add injury to insult, VIP invitations, which the college sent out on our behalf, appeared to have morphed from our own 21° to their garish, generic ‘Exhibitionists’ invitation.  3 of the invitees who know us had to phone for directions; one of R’s colleagues who tipped up down the road was informed that Fine Art was ‘on all sites’ so who knows who else we lost?  Meanwhile, back at Burlam Rd., not a governor or any of the college management was in sight…even some of the tutors were missing…

Well, the Principal did turn up on family and friends night and I had to resist the urge to tell him he hadn’t been invited.  He’s a very nice man and he did apologise for missing what must have been the quietest of degree shows ever (which, ironically, he also described as one of the best degree shows ever).  I’m only thankful that one of our sponsors was unable to fund the event because of business commitments – it would have been too shaming to bear.  As R has said, he will think very carefully before agreeing to help another degree fundraiser in the light of our experience.  Sod’s law it happens to our year, eh?

Last night was f&f and very jolly – lots of booze because nobody had drunk it the night before!  Pitching up for sentry duty today was to discover some very hungover bodies scattered out in the sun or hiding inside in the shade on sofas purportedly there for the exhibition.  It runs until Wednesday and then – finito!  What a lot of effort for nowt.

So, it’s goodbye blog, it’s been good to know you.  Thanks to a-n for the opportunity to write it and thanks to fellow bloggers for sharing their experiences.  I can’t tell you my degree results because they don’t come out for another fortnight (and I don’t suppose I’ve done them much good tonight!).  Congratulations to Jay and the best of luck and good fortune to you all.  Perhaps meet up again if a-n does a recall in a year or so…?

P.S. Tomorrow I’ll post some pictures of other work in the show – please don’t go away quite yet!

Goodbye, Mike, if you’re still logging on.  It’s been wonderful to be reminded of another degree run-up.  I’m not sure that this format isn’t actually more demanding than exams, especially as we took many of ours down at ‘Old College’ gazing out at the sea as it teased the rocks.  I certainly hadn’t prepared for those finals as I have for these.  There’s something significantly different about working towards a target you have chosen later in life, rather than a teleological progression of conventional education.  I’m constantly struck by the number of ‘mature’ students, full and part time, who turn to art degrees.  As I said last blog, it’s been very rewarding for me and the test now is what I’ll carry forward.

But back to the present.  I’m recovering with a glass of wine after my day out with Vernon.  He’s not an easy fellow; big vans of his generation were designed for beefy, macho-men who take their tops off when the sun shines and write profane graffiti on the sun-visors (we have some).  I’m a match for most men but I feel no desire to prove I can tame Vernon and usually choose to leave him to my husband.  But he wouldn’t take the responsibility of transporting my paintings this morning so he FOLLOWED me!  Yes, I did hit the curb twice – sorr-eey – but we did make it intact apart from one of the panels getting stuck to its bubble wrap (touch up Monday).

The electrician held me back by at least ½ a day, much to the ire of our caretaker.  He’s a great bloke as long as you’re not bothering him but today I outstayed my welcome.  Unbeknown or unexamined to/by me, we were meant to vacate the premises at 12.30 so he could paint the floors.  Well the electrician took forever to do the lights (he had spent the whole of yesterday putting up the most pathetic example of lighting and, as one has to in those circumstances, I had to be as politic in my critical appraisal as possible or eureka! – neon strips).  So, having lumbered in in Vernon, I was not going to leave without hanging the paintings.  We left at 4.15.  I couldn’t understand why my foot ached so much.  When we stopped to open the gate at home, I took off my shoe to find a staple imbedded ½ a centimetre in my toe…one must suffer for her art.

So this weekend is finalising all the publicity material, research book and the foldout for my little book.  I have all the main text and images sorted but I’m not sure it will get finished.  We’ll have to see.  Monday is final touches: book plinth, signs, etc.  All the full-timers have postcards.  Postcards?  Oh, no… something else to do!  And price lists!  What?  I only have 4 pieces and one is definitely not for sale…oh, pass the wine… takeaway tonight folks.  Last instalment next week.