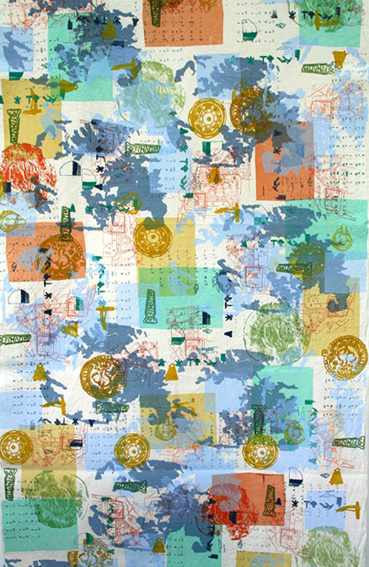 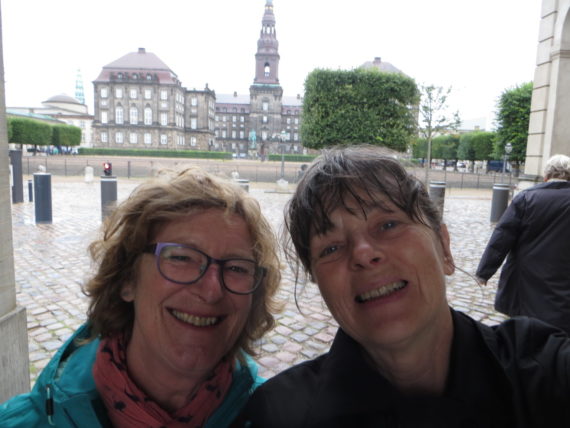 Went to Copenhagen National Museum, where we were met by Flemming Kaul and Morten Axeboe and ushered through a labyrinth of offices, libraries and store rooms to discuss Bronze Age finds and decorative bracteates from 400-550 AD. We felt very privileged to be guided through the museum by such an eminent archaeologist/ curator and shown important artefacts like the Gundestrup cauldron and the Sun Chariot, and have the stories around them explained by the original researcher. 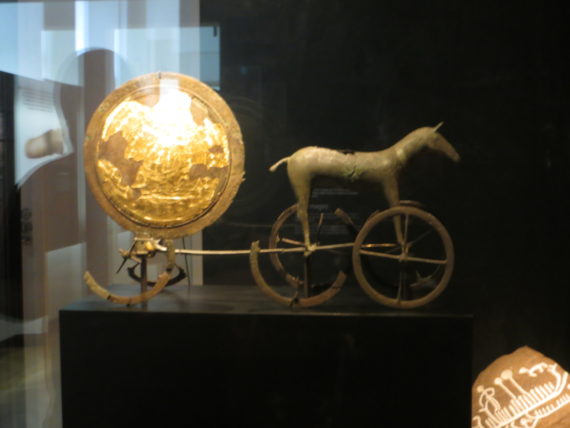 Came away amazed and inspired, after a full afternoon in the museum, and emerged into brilliant sunshine. 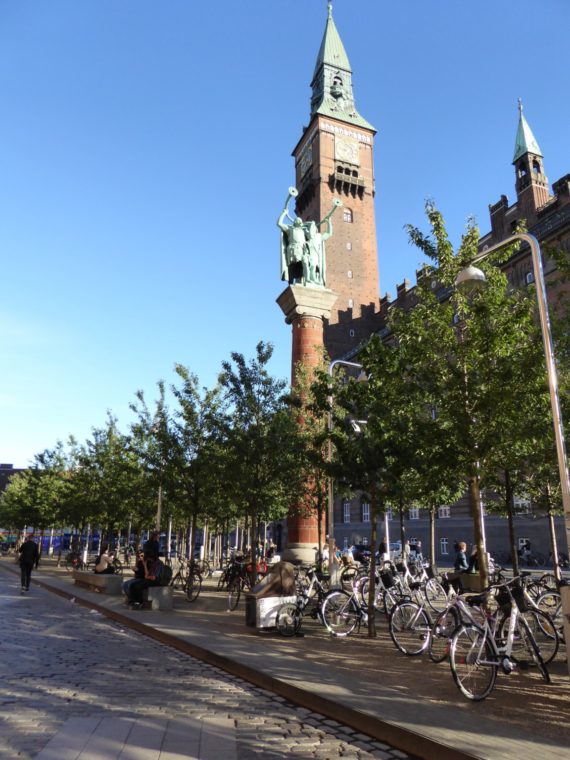 Now we are home exhausted and exhilarated and preparing to consilidate all our research as well as create a network of people we have met. More news to follow…..

We met the administrator and project co-ordinators at Godsbanen Arts Centre, Aarhus. They explained how the art centre works and gave us details of opportunities for artists of all disciplines. They were extrememly friendly and helpful and put us in touch with Anne Dyhr and Roos Holleman, two artists based in Aarhus and following similar lines of enquiry to us. We will be making further contact with all of them on our return to England. 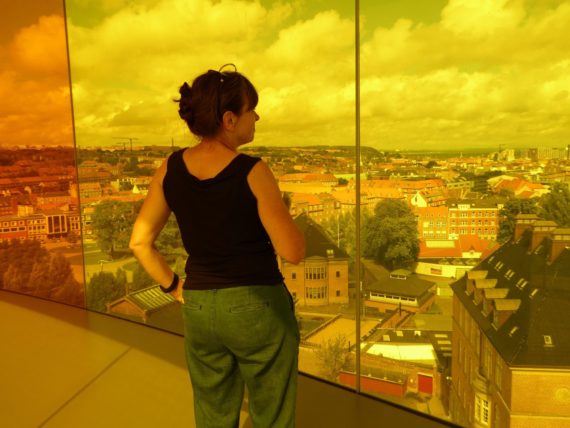 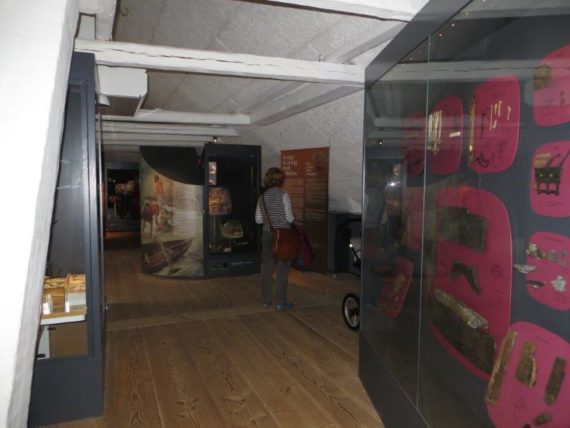 VIBORG: links with Lincolnshire and Northamptonshire pottery found at Viborg, evidence of work and crossover of skills by English/Danish blacksmiths, cobblers and moneyers in the 10th century. But most inspirational artefact was fragments of woven tunic found in a posthole by the curator/archaeologist who guided us through the Viking period. It was facinating to talk to the actual person who had found it and see the reconstructed tunic. Food for thought!
Then onto the Kunsthal at Viborg to look at contemporary Danish art exploring archaeology, place and time passing.
SATURDAY: Explored Aros art centre and experienced Olafur Eliasson’s Rainbow floating roof walk and installlations and a Grayson Perry retrospective.
SUNDAY: one hour and a half train to Jelling to see the enormous shipsetting and rune stones from the 10th century. Here we also experienced ‘Bifrost’ , the rainbow bridge between the human world and the world of the gods in the spiral staircase installation. An interesting link to Eliasson’s roof walk.
Harald Bluetooth’s ( the name sake of modern bluetooth technology) son and grandson both became English kings- Sweyn Forkbeard and Canute the Great. Amazing runestones.
Then onto Vejle Kunstmuseet where we were shown an extraordinary collection of Rembrandt’s etchings- the reason for the museum’s existence.
Tomorrow we meet artists at Godsbanen.

Arrived in Aarhus Wednesday 10th August. Sunshining and great airbnb. Yesterday morning we were fortunate enough to have a personal guided tour of the Viking artefacts at Moesgaard Museum, which opened our eyes to new ideas and possibilities. It was such an amazing experience in this fantastic and architecturally unique museum. Today we go to Viborg.

Many of our new contacts suggested that we must speak to Brian Ayres AMA of the UEA, author of ‘The German Ocean, Medieval Europe around the North Sea’ to be published this autumn, ‘Norwich, Archaeology of a Fine City’, and contributor to ‘East Anglia and its North Sea World in the Middle Ages’ by David Bates and Robert Liddiard. We were fortunate to be able to discuss links between East Anglia and the Scandinavian countries re; material and cultural links through, archaeology, history, architecture and trading links. We learnt of many fascinating connections between place names, town plans and mapping, the significant role played by women under ‘Danelaw’ and new sites to explore whilst in Denmark such as Jelling, site of a 286 metre long ship setting. Brian also related fascinating stories of the journeys made by artefacts in the Middle Ages such as a 10th century fragment of silk found at Lincoln and York but made in Samarkand. We are grateful to him for sharing his enthusiasm and knowledge.