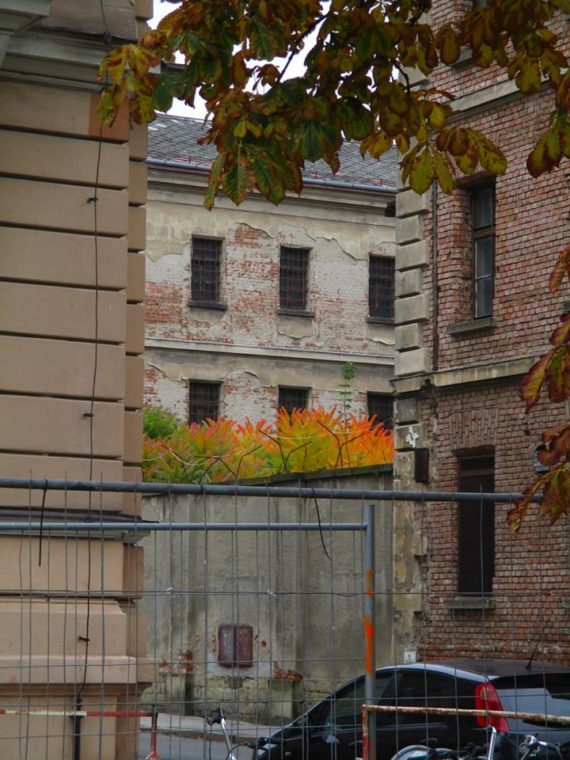 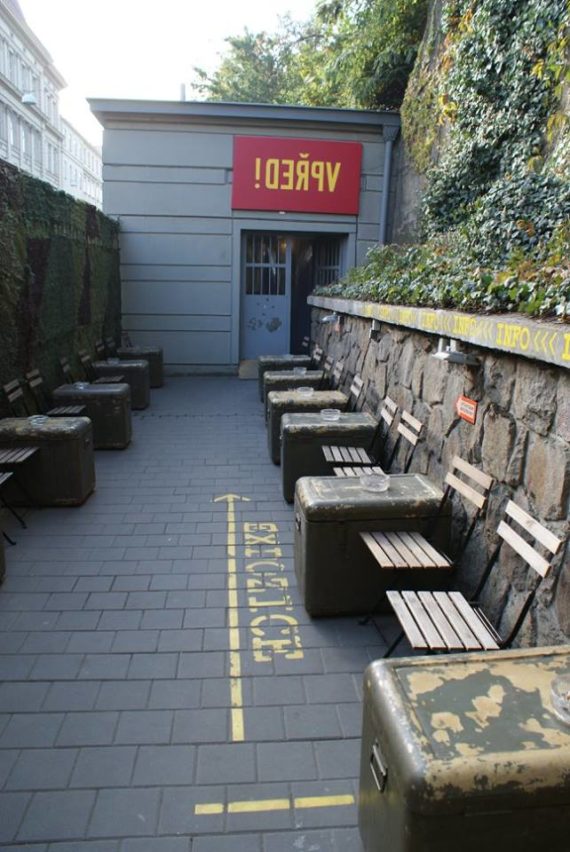 The first night we were staying in Brno at the 10-Z bunker, this former WWII highly classified fallout bunker was opened up as a hostel with all the original contents inside it; metal beds, sleeping bags, canisters and metal boxes, old motor bikes, new paper holders, typewriters, switch boards… 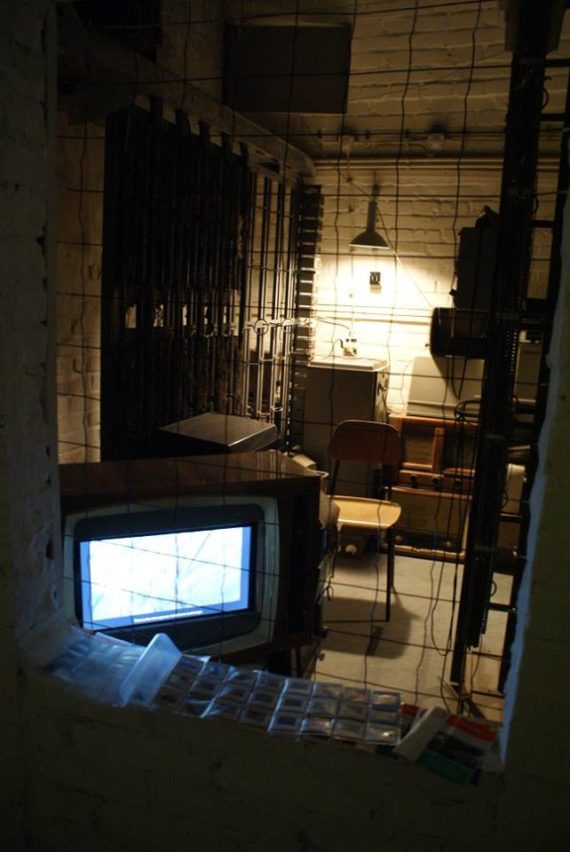 Part of the vision was to create an exhibition open to the public with guided tours and art and video installations were a part of this. The pieces were fascinating and made from old TV sets and ephemera they almost seamlessly merged with the contents of the bunker, making a sensory experience of the strangest kind, like stepping back in time, right down to the fake identity card you are given when you sign-in.

It was an amazing place to stay and at midnight they turned the air noisy fans off, leaving you to drift off to sleep wondering what might happen if the air ran out… 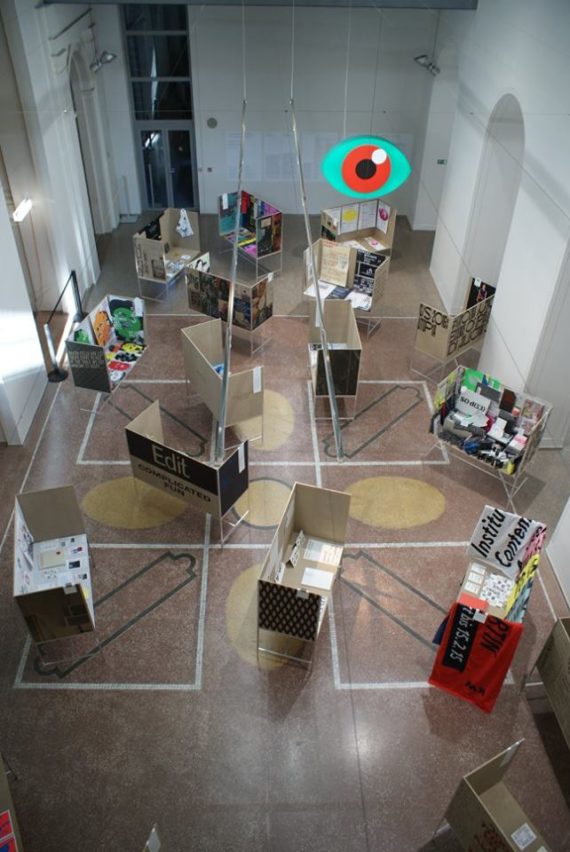 Our second day we explored the city of Brno’s art galleries and were lucky enough to arrive during the annual design expo; Bienále Grafického Designu 2016, a series of art and design exhibitions were taking place in multiple galleries in the city, and as students we were given a pass to visit them all.

Gallery spaces were taken up with a selection of graphic design in Czech and English, and I was interested to see the layout and curation of the exhibition as much as the work, an award was given to well know poster designer Zdeněk Ziegler:

I was most interested in the technique they had used to colour print onto the raw MDF of the exhibition stands in one hall, using small boxes to display the work of different designers, which could be seen in a grid formation from above. 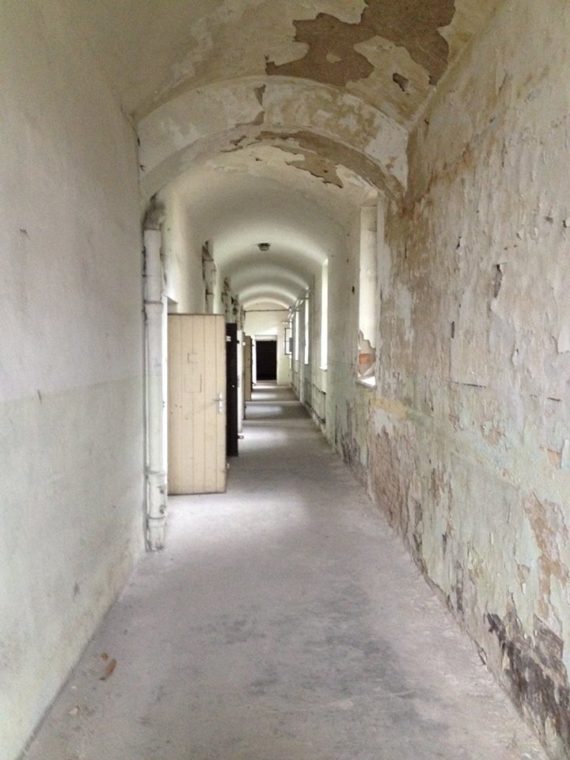 The first day in the prison it’s cold, dark, dank, there is no electricity, many of the windows are broken or open, its five degrees outside but feels colder inside. As we start moving about we stir up years of dust which gathers on your chest and makes you wheeze.

We had one day to collate data and materials for the work we were going to produce off-site and one day to come back and exhibit it. Which this in mind I had pre-planned and bought a polaroid camera with me, and a selection of mug shot faux ‘boards’ printed on A4, with each of the teams names on it. My first job was to test the Polaroid camera (not used since the 1990’s) and then get the team into areas to shoot. 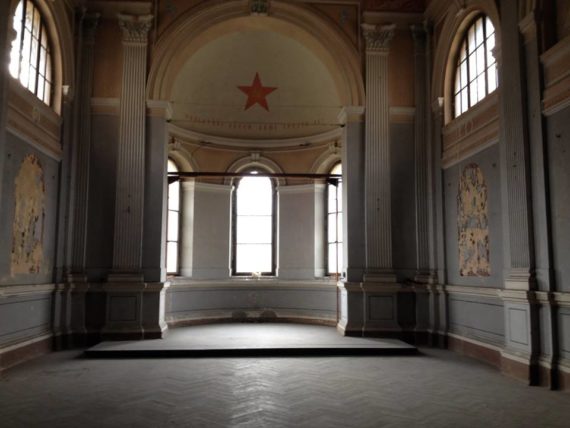 The camera didn’t seem to work at first, but after about ten minutes the first test shot started appear, I think the cold was affecting the processing time it was under five degrees in the prison. Once I established it was working I started to take the team to different areas and do the shots. Gradually they started to prove. Some of the guys on team decided that they didn’t want their photo taken, this was a blow to me as the prison would have been mostly men to my knowledge, and the conscientious objectors on my team were the men, so I had a selection of shots with mainly women, albeit with them looking mean! Luckily I had prepared a ‘John Doe’ and ‘Jane Doe’ sheet to ask some of the students to get involved, so I decided to ask more boys to balance it out.

I continued with my DSLR to record the space as I would an Urbex, I was captivated by the peeling paint, hand painted wallpaper, electrical boxes and bones of the building on show. A tour of the outside space also bough home the human element, a balcony beneath the chapel, where it is believed people were executed. The courtyard is green and overgrown and looked over by the working part of the art school, but I felt I needed to take a moment to consider those that had lost their lives there.

Later on when students from the school arrived I asked some and they were happy to take part, I still hadn’t used all my polaroid film so I asked the teacher to ask some other students for volunteers, some boys agreed and I took them into the chapel, but when I showed one the fake mugshot sign he objected and said he wouldn’t do it, his friend tried to persuade him, but he said he didn’t agree with it in broken English. I immediately told him not to worry and that no one was under pressure to take part, and was aware of the immediacy of the deaths that took place here only one or two generations ago, and that many local people had relatives imprisoned or killed here.

Having laid all my Polaroid’s outside to cure, I had also bought a small snappy camera with video on and recorded some sound clips for possible use later. I also collected some abandoned stamps and paper work that were piled up on the floor in one of the rooms.

I wanted to gather as much data and information as I could in the time I had, as we had this one opportunity to work in the building. 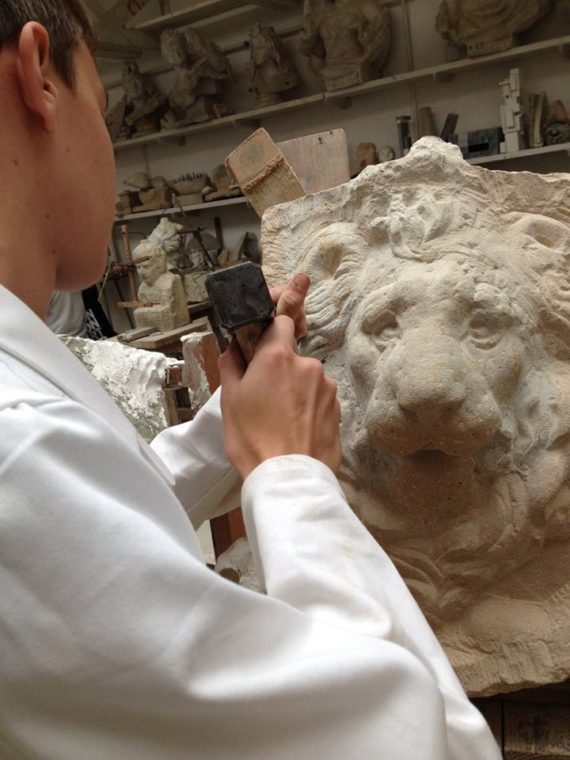 In the afternoon we were taken to our studio space which was upstairs in the 3D building an art deco style building two streets away from the main building of the art school. We were given a tour of the sculpture room, by the French teacher there, and he showed us how they learn to carve traditional methods such decorative items as lions heads, using a contraption that measures the points on the stone, that you then transfer onto your piece and chip away at to make the two pieces match perfectly, it was a really interesting introduction to how these things were done, and one of the few schools to still teach these traditional skills.

We then had a ceramic/clay throwing workshop where we all had a chance to throw pots.

At this point we were realising that our schedule was very full and we were only going to have two afternoons free to produce the work we were exhibiting in the prison, which for me was a bit of a shock as I knew I had to manufacture the lighting system with 40 lights to attach and no guarantee it would work, at this point I was glad I had done the Polaroid project! 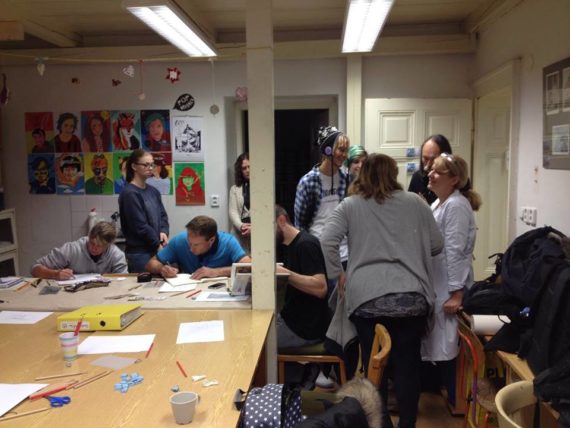 We were welcomed into the print workshop of the art school, and for me this was my first experience of dry point etching. I had my camera with me along with the printed material I had gathered on the site, and wanted to combine a photo and stamps/imagery from the paper work. I drew out the design, but then realised the writing would be reversed if I didn’t reverse the design first so had to trace it out back to front and then etch it into the plastic. We were guided in how to prepare the plates, using multiple coloured inks, and the technical support team were very kind, and gave us some shots of the local tipple to celebrate the completion of our workshop.

During the afternoon it was all systems go on setting myself up a studio space, we had a shared area, and a locked room for coats, with beds around the edge, as the main room was very full with every one, I decided to convert the coat room into my area, I asked some staff downstairs to carry a desk up for me, found an extension lead for my glue gun, then set about unravelling and releasing the optic fibres into bundles and taping them together with masking tape to prevent them re-tangling. After spending the whole afternoon doing this repetitive task I had 40 bundles ready to attach.

Our mulita-media workshop was in the technology department in the main school building, we were hoping to do image mapping but were told that it was not possible in the time available so we ended up using some freeware that interprets sound and wireframes to free-style some work projected on the wall. It was fun to work with a new group of Czech students, but I was getting anxious about the amount of time I had left to create the work for the show. 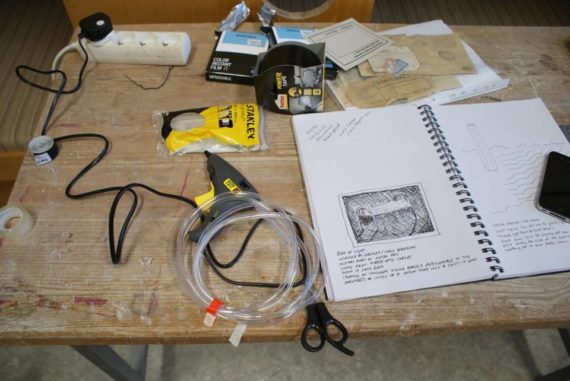 This afternoon in the studio was pressured to get the whole work finished, I sat and glued 40 transparent tubes to the optic fibres, pressed them onto the lights, and then on completion covered the light elements with black tape. By the end of the afternoon I lifted the piece onto two desks and laid it out in sections as to where would be each part of the body. I started to glue a head shape with the hot glue gun. We broke for dinner and I invited some of the team in to look at the piece in the dark on our return, at this point I had two options, to stay up all night and work the piece into a readily identifiable human form (without a model to work on) or as suggested by the team to let go of the outcome and as they said the piece was identifiable as a human form because of the proportions and the head formation, to leave it as an abstract form. I was having a real internal battle about this as I love to get work to a stage of completion that I have envisaged, but on this occasion I had been travelling and to many workshops and was quite frankly knackered and knew that pulling an all-nighter would pretty much mean I was out of action after the show with tiredness.

So I made what for me was a ground breaking decision to go with the work in its current form.