To accompany the diagram poems in my The Wonderful Pile of Dirt exhibition, I will be presenting a selection of the “devotional objects” pictured above. These small scale assemblages reference sacred art and ritual objects from a variety of traditions. Each item is composed of detritus found on walks through the city – lumps of concrete from building sites, plastic tat from the pavement, yarn tangled in bushes – brought together to create and icon of significance to an unknown worshipper. I am interested in the way in which faith practices permeate daily life, or fail to despite the importance given to them. This line of enquiry was initiated at once by both the lavish church altars and street side shrines encountered during a trip to Italy, and by a newspaper photograph of the ad hoc shrine kept by Deyanov Valentinov Deyanov – who killed a British tourist in a convenience store – in his make shift abode in Tenerife. 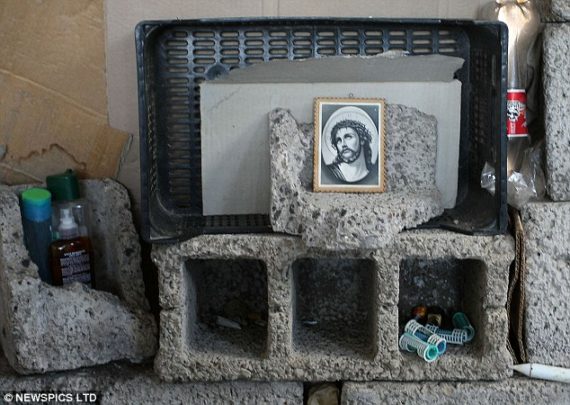 I was fascinated by the contrast between belief and action and the shrine’s existence between these two facets. As my diagram poems and devotional object assemblages explore, through sculpture and language, the transcendent in the everyday (or the wonderful amidst the dirty) I hope to engage with this phenomenon. Not to define or explain it, but to describe it and to consider it with empathy.

Studied BA Fine Art at Loughborough University School of Art and Design 2001 - 2004 and MA Sculpture at UAL Wimbledon College 2008 - 2009. I now live and work in South London. My practice maps the spaces between brokenness and wholeness, between doubt and trust, hope and fear, superstition and faith - the in-between places that we inhabit emotionally every day. Referencing religious and pop imagery my assemblages, animations and works on paper explore themes of sacrament, the everyday and the transcendent.