I was asked by my previous University to write a short blurb about my time there studying for my Masters and send some photos for their Alumni feature. It’s a great opportunity to reflect on my time there and the impact it’s made. Although dialogue is an essential part of life and practice, particularly collaborative practice that has spanned my career, my specific interest in dialogue as practice really stemmed from my rubbish research and ‘Talking Rubbish” which I developed during my Masters.

Today I looked back at old photos of Supermarket Art Fair 2014 in Stockholm where I launched my Rubbish Newspaper and reflected back on the conversations with other artists and visitors there. I looked at the photos from my Museum of Contemporary Rubbish solo show at Venn Projects in Blackpool where I first ‘performed’ Rubbish Conversations as an informal, unstructured conversation with preview visitors about rubbish (2014).

Even further back than that when I first set up the Museum of Contemporary Rubbish (2010) for my work for Barnaby Art Market which I co-curated as part of Contents May Vary, the market stall exchanges I made with people were centred on dialogue and their value judgements and perceptions of their own and my studio rubbish (brown paper bags and inside out boxes). 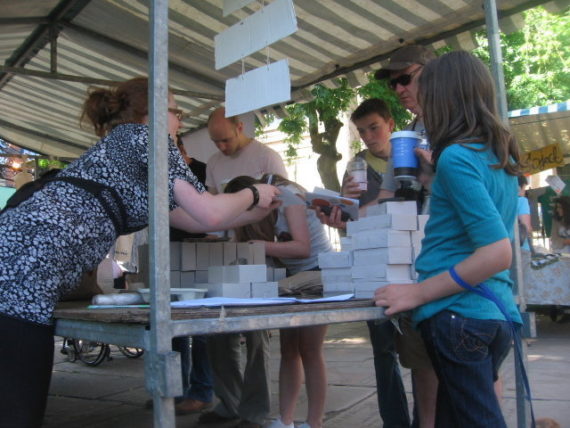 Before the Museum of Contemporary Rubbish, I made Limited Edition Change for £5 (remains of a holepunched £5 note) and exchanged them for object or money of equivalent worth involving a dialogue, an exchange. 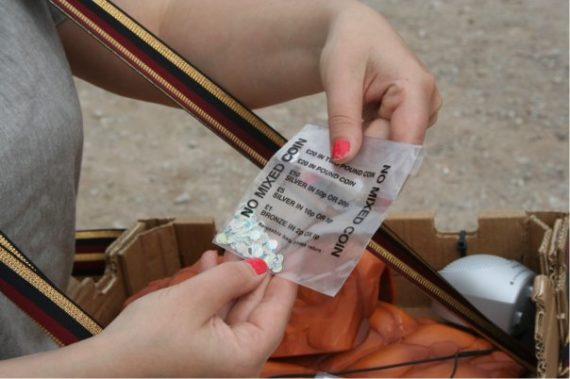 The holepunching and ideas of value can be traced all the way back to 2004 when I first holepunched a fiver and calculated the value of the ‘chads’ would by £1.77. 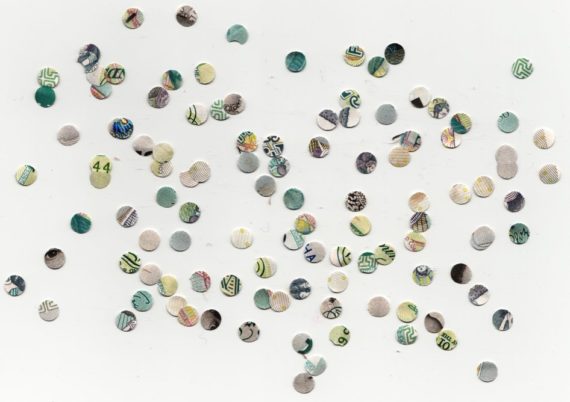 And holepunching wasn’t limited to money. I holepunched a book called The Rocks Remain in 2003 and made some book works and returned to these images in 2009 and made the video Static which won an award at the 2009 Toronto Urban Film Festival (Best Urban in Idea Award).

This is also around the time where my interest in language and fragmented langauge began to develop as well. I had a mini residency in the exhibition space at Bates Mill where I had a studio, in the lead up to a group exhibition there (the first Temporary Art Show, which led onto Temporary Art Space six month gallery project at the Piece Hall). Temporary Art Show was where I first stamped Blah Blah Blah on the walls which I’ve since turned into an audio piece Blah Blah Blah (2010) and performed it as a duet with Lucy Simm for Girlcott at Hebden Bridge Arts Festival 2018.

Tracing these interests back and how they’ve manifested and continue to manifest is a really valuable process to indulge in. It reminds me of the inspirations and the contexts they have manifested in and the processes that have shaped the development of the works. Often it’s having an exhibition context to showcase work in that pushes something into a new direction. Sometimes it’s having studio time to play around with materials and ideas. Both of these aspects are ciritical to my practice.

The first batch off offcuts I collected from Bridge Rectifier (see previous post) look like letter/symbol cut outs. Perhaps this was what drew me to them intially when I saw them in the offcut tray (the lasercuter’s bin). This duality of relationship to language combined with being rubbish is a perfect combination! 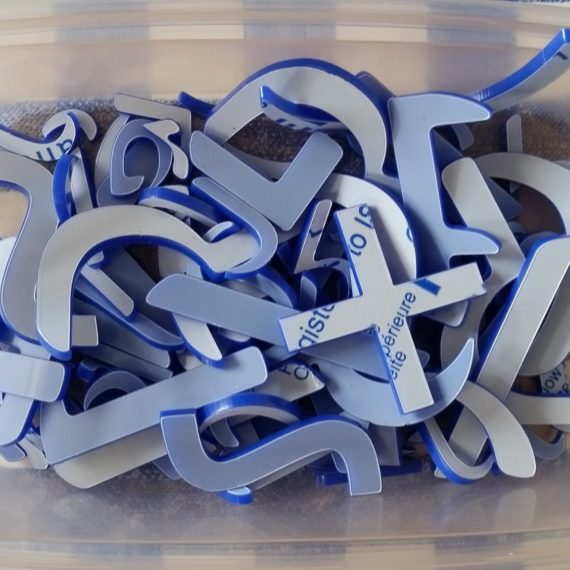