here’s some picture’s of the sculpture work i did at gwaith powdwr bit late but i’ve only just extracted them off the camera they were on.

i’m slowly beginning to think i’m not really a technology type person, better late than never tho i guess. although i did recently discover batch resizing!!! in photoshop- its a godsend, i can just click ‘automate batch’ and it takes photos from a folder, one at a time resizes them for the web, saves them at optimal web thingy then puts them in a folder ready for me to upload to my blog!

brilliant! i just sit and watch it doing it and it takes about a minute compared to an hour of me faffing with resizing each one individually ! very happy me :-)

these pictures don’t really do the piece justice but give a bit of an idea.

i really liked working collaboratively and think i’ll be doing more of it in the future, it’s so much more fun making work with other people than by yourself. the theme of the piece was to do with boundaries and freedom- the birds were caught in the fence almost morphing into it and then freeing themselves, i’m not sure it was succesful but looked great and i think it is a work in progress or theme in ongoing progress..

My work will be showing in an exhibition in Cornwall next week at open space galleries, Penryn.

nice train graffiti picture! been spending my life on trains lately – it takes me 3hours to get to school door to door! need a car! need money first tho.. 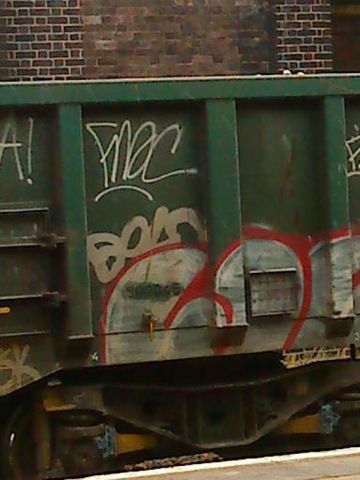 yikes its been over two months since i wrote on this blog, i had a break to move house over august and i think the longer you don’t do these things the harder they are to get back into.

i’ve been back in school for a month now- the room i’m in isn’t being used for classes anymore so its been a bit more flexible when i go in.

we finished the dragon for open evening and had it breathing smoke which was great, the caretaker’s grandson sat under an umbrella pressing a button whenever people went past, highly entertaining!

i’m lacking decent photos at the moment as it keeps raining everytime i try to take a photo outside.

I am a multi disciplinary printmaker, interested in the human condition around connection to place, freedoms and community. I work in a multitude of ways, facilitating workshops in Art, health & wellbeing, organising community projects, collaborating and colluding. I am interested in art & ecology and projects that promote sustainability. https://nicholagoff.org/